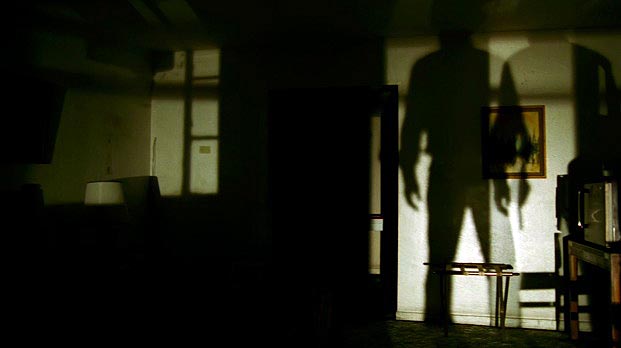 A shadow in the light from a doorway.

Some of you may have gotten the impression that I think rather highly of "No Country for Old Men," so I was pleased to be asked by editor Dave McCoy to write a little blurb about it summarizing my appreciation. It goes like this:

Shot by shot, cut by cut, sequence by sequence, no movie this year (or any other year) was more grippingly, cinematically exhilarating than "No Country for Old Men." Joel and Ethan Coen's first literary adaptation (from Cormac McCarthy's novel), crackles with an intensity that sharpens and stimulates your senses and reminds you of how little most other films do with the essential expressive properties of the medium: light, color, sound, movement, language. Movies are as much about the orchestration as the composition, and the Coens have orchestrated and composed a masterpiece -- one that embodies what most movies only describe.

A Western, a crime picture, a chase thriller, a ghost story (though not in the supernatural sense), "No Country" is the story of Llewelyn Moss (Josh Brolin), a man chasing a dream ($2 million in drug money he's found in a satchel); Anton Chigurh (Javier Bardem), a messenger of death who's tracking down Moss for the money; and Sheriff Ed Tom Bell (Tommy Lee Jones), who's trailing both of them. Tension builds as the film progresses, even as the violence recedes. This isn't a movie about murder; it's about the awareness of inevitable death that stalks us all.

Check out our individual lists here. My Scanners list (with blurbs on all my favorites) will be somewhat different...

Next Article: Why the Helvetica is Trajan the movie font? Previous Article: For Your Consideration: Anton Chigurh, Supporting Actor

Why the Helvetica is Trajan the movie font?