No Country for Old Literalists 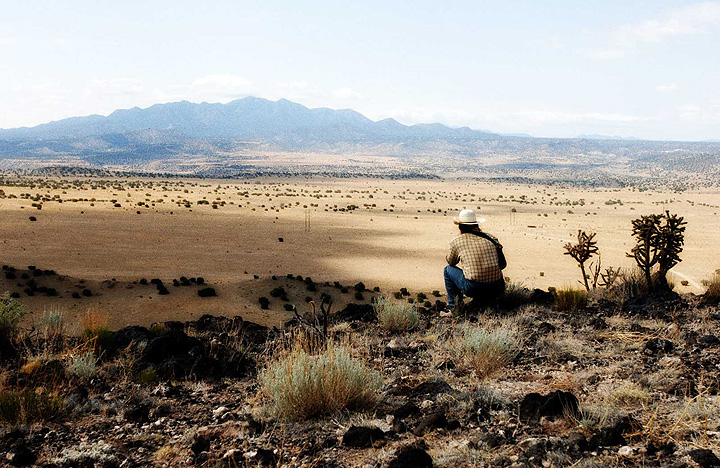 Something dark and shapeless approaches in "No Country for Old Men."

"Adapted from what is generally considered a minor Cormac McCarthy novel, 'No Country for Old Men' is a very well-made genre exercise, but I can’t understand why it’s been accorded so much importance, unless it’s because it strokes some ideological impulse."

Here's where I agree with Jonathan Rosenbaum on the Coen brothers' new movie: 1) it is based on a ("minor") novel by Cormac McCarthy; 2) it is a very well-made genre picture; and 3) Rosenbaum does not understand why it has been accorded so much importance. When Rosenbaum says the only way he can account for the critical response to "No Country for Old Men" (and "The Silence of the Lambs" before it) is to assume it's "because it strokes some ideological impulse," I believe he means what he says even though I don't know what he thinks he's trying to say. [Rosenbaum responds, in comments below that "the core of my argument [is] the occupation of Iraq and the daily killings and torture that we simultaneously support and strive to ignore."]

His review is based on the assumption, stated in the third paragraph, that "No Country For Old Men," is a "psycho killer" movie like "Silence of the Lambs," which it most emphatically is not. It is a genre movie, but Rosenbaum gets the genre(s) wrong. It's a noirish crime thriller and a western and a detective story. (The Library of Congress catalogues the book under "drug traffic," "treasure-trove," "sheriffs" and "Texas.") But the motives of Chigurh (Javier Bardem's character) have nothing to do with the psychology of a serial killer like Hannibal Lecter or Norman Bates or Michael Meyers. There's no psychologist on the scene to explain him ("What does he seek?," as Lecter puts it), because he is not compelled to kill and he derives no pleasure from it and he does not choose his victims or his methods according to some profile or pattern.

Chigurh is out to retrieve a MacGuffin (briefcase full of cash), and he simply eliminates anything or anyone that gets in his way, using whatever means are available to him. The plain fact that he favors an efficient tool for quickly dispatching cattle (something not uncommon in Texas ranch country) reinforces how little emotion he attaches to the killing of most of his victims. He'll just as soon strangle them or shoot them. Or maybe he won't, if he has nothing to gain. He doesn't fit Rosenbaum's profile any more than he fits the ones Law Enforcement initially tries to impose upon him in the movie.

I remember writing something similar about "Rambo: First Blood Part II" and "Back to the Future" in the 1980s, when Ronald Reagan presented us with "Morning in America," which meant that the way to face the present and the future was to return to an idealized fantasy version of the past. Heck, it wasn't even too late to retroactively win in Vietnam! (Never mind that John Rambo was a psychologically disturbed Vietnam vet in the first movie.)

Rosenbaum compares Chigurh to the Misfit in Flannery O'Connor's "A Good Man Is Hard to Find," which is an illuminating comparison, though not necessarily for the reasons he gives:

In O’Connor’s vision, perfectly captured in a mere 16 pages, the Misfit is an emblem of religious despair, but in the less considered genre mechanics of Cormac McCarthy and the Coens, religious despair is nothing more than an alibi for violence. It’s invoked as a way of covering all the bases, tapping into fundamentalist fatalism without really buying into it.

"Religious despair"? "Fundamentalist fatalism"? Loaded terms, but they reflect a very limited reading of O'Connor and McCarthy and the Coens, of "A Good Man Is Hard to Find" and "No Country for Old Men." Perhaps if Chigurh needs to be reduced to an "emblem" of something, it's ruthless, indifferent force in the single-minded pursuit of any goal (religious, financial, political, genocidal). Some people would define that as the nature of "evil."

I've read two or three other bewildered reviews of "No Country for Old Men" that concentrate on the plot and/or Javier Bardem's haircut, or how the stuff they think is supposed to be funny isn't funny to them. And everybody -- even those who really don't approve one bit -- want to assure their readers that the Coens and DP Roger Deakins are technically proficient, which tells us almost exactly nothing except that they think it has "beautiful cinematography" or something equally meaningless. But, fine, if that's what somebody feels the need to write about in response to this movie, then that is evidently what they have to say about it, and that's that.

I have more to say, but I would like to refresh my memory of the movie, which I saw once last September near the beginning of the Toronto Film Festival. Here's something from my initial (preemptively defensive) response back then:

"No Country for Old Men" is one of those movies I think provides a critical litmus test. You can quibble about it all you like, but if you don't get the artistry at work then, I submit, you don't get what movies are. Critics can disapprove of the unsettling shifts in tone in the Coens' work, or their presumed attitude toward the characters, or their use of violence and humor -- but those complaints are petty and irrelevant in the context of the movies themselves: the way, for example, an ominous black shadow creeps across a field toward the observer ("No Country" has a credit for "Weather Wrangler"); or a phone call from a hotel room that you can hear ringing in the earpiece and at the front desk, where you're pretty sure something bad has happened but you don't need to see it; or the offhand reveal of one major character's fate from the POV of another just entering the scene; or... I could go on and on. To ignore such things in order to focus on something else says more about the critic's values than it does about the movies. It's like complaining that Bresson's actors don't emote enough, or that Ozu keeps his camera too low.

Advertisement
Those words were written in the thrall of the movie, and I stand by them. Rosenbaum begins his review with a quote from George Orwell:

The first thing we demand of a wall is that it shall stand up. If it stands up, it is a good wall, and the question of what purpose it serves is separable from that. And yet even the best wall in the world deserves to be pulled down if it surrounds a concentration camp.

So... "No Country For Old Men" should be pulled down because it is a cinematic concentration camp? What of those who don't recognize a good wall when they see it, and mistake it for something it is not? What if they think they're pulling down a concentration camp wall, but it's actually a New Orleans levee and there's a hurricane on the way? What if they think it's a terrorist outpost and they bust down the walls only to discover it's really the home of an Iraqi family? What if the sturdy walls and magnificent arches of the Mezquita de Cordoba are left standing after the Moors are vanquished and the Christians build an elaborate Baroque Cathedral smack in the middle of the mosque?