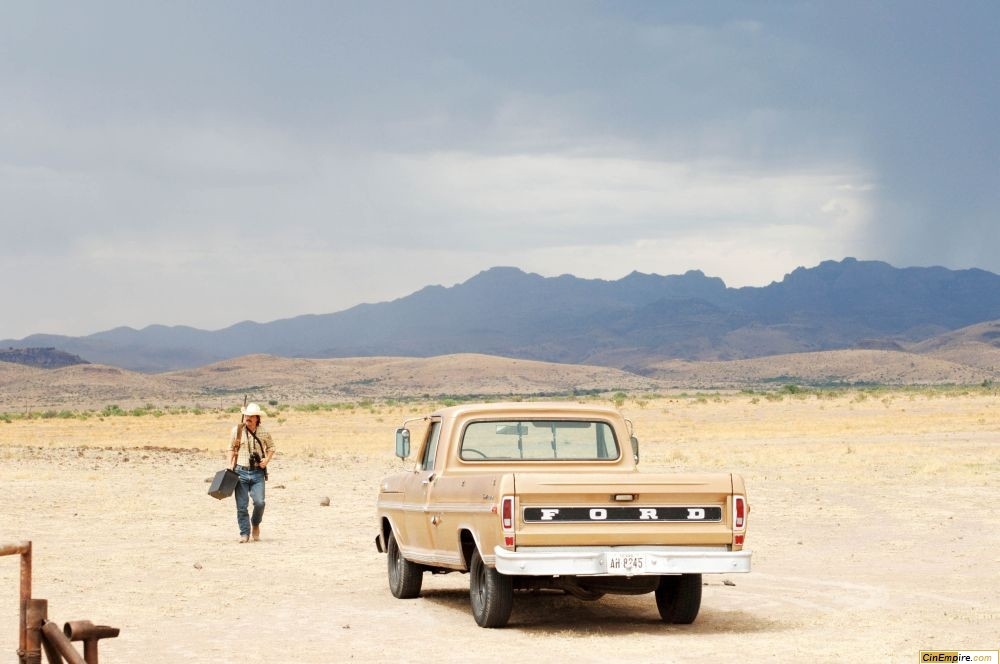 You see it or you don't.

Toronto's is an international film festival, and naturally the films are shot in locations all over the world. But one thing so many of the best films in this year's fest have in common (a thing all great films have in common) is not the places in which they're shot, or set, but the places they create, and pull you into. These aren't travelogues. The films are the places, whether the geographical locations exist independently of the pictures or not.

Tommy Lee Jones' character, Sheriff Ed Tom Bell begins Joel and Ethan Coen's "No Country for Old Men" with an elegiac monologue about missing the "old times." His words are spoken over a montage of western landscapes in blazing oranges and reds (the incomparable Roger Deakins is the DP). By the end of this reverie, we're no longer in the past but in the harsh daylight of the present, and the color has drained from the images. The way Ed Tom sees it, he's outmatched in the modern world where violence is random, unmotivated, and unpredictable.

Within moments we see a shocking example of what he's talking about, as Anton Chigurh (Javier Bardem) strangles a man on the linoleum floor of an office, his dead yellow eyes fixed on the ceiling. That's a terrifying touch: Chigurth doesn't even look at his victim, even while he's garroting the guy. And then, one of those Coen touches: a shot of the floor, covered with a mess of black heel marks from the killer and his prey.

"No Country for Old Men" is one of those movies I think provides a critical litmus test. You can quibble about it all you like, but if you don't get the artistry at work then, I submit, you don't get what movies are. Critics can disapprove of the unsettling shifts in tone in the Coens' work, or their presumed attitude toward the characters, or their use of violence and humor -- but those complaints are petty and irrelevant in the context of the movies themselves: the way, for example, an ominous black shadow creeps across a field toward the observer ("No Country" has a credit for "Weather Wrangler"); or a phone call from a hotel room that you can hear ringing in the earpiece and at the front desk, where you're pretty sure something bad has happened but you don't need to see it; or the offhand reveal of one major character's fate from the POV of another just entering the scene; or... I could go on and on. To ignore such things in order to focus on something else says more about the critic's values than it does about the movies. It's like complaining that Bresson's actors don't emote enough, or that Ozu keeps his camera too low.

A moment here to celebrate the genius of one of the greatest talents in motion pictures, supervising sound editor Skip Lievsay, who has worked with the Coens (and Spike Lee and Martin Scorsese and others) since way back before the mosquito buzzing and peeling wallpaper of "Barton Fink." Since the bug zapper in "Blood Simple," in fact. Also, composer Carter Burwell ("Psycho III"!) has been associated with the Coens for just as long. He's credited with the music in "No Country," too, but it's to his merit that I don't even recall any music in the picture -- except for one memorably Coen-esque appearance by a mariachi band.

When I read Cormac McCarthy's novel, it struck me as a Coen screenplay just waiting to become a Coen film. Indeed, by that time it already was. And it could serve as a model of prose-to-film adaptation, choosing exactly the right moments and movements for the picture, and leaving alone others that are better suited to literature. (This is especially true of some very savvy omissions in the latter part of the movie.)