My scene with Kristofferson

We have in the past examined my stunning and unforgettable cameo appearance in David Mamet's 1987 directorial debut feature "House of Games." What you may not know is that I also co-starred with Kris Kristofferson, Keith Carradine, Genevieve Bujold, Lori Singer, Joe Morton and Divine in Alan Rudolph's 1986 "Trouble in Mind," which was also shot in Seattle. Well, OK, I appeared in the background of a few shots. But I did share screen space with Singer ("Footloose," "Short Cuts") -- and Kristofferson, for at least a few 24 fps frames. As you can see above.

Here's the behind-the-scenes set-up: I was having the time of my life booking first-run "art films" at my friend Ann Browder's 250-seat Market Theater, formerly the Pike Place Cinema in the cobblestone Lower Post Alley in Seattle's historic Pike Place Farmer's Market. I can't remember how I had met Alan Rudolph, but I had interviewed him a few times and he had the world premiere his first film, "Welcome to L.A." (1977) in Seattle at the Harvard Exit Theater. (Robert Altman made one of his many trips to Seattle for that premiere, and hosted the world premiere of "3 Women" at the same theater.) "Choose Me" had also been a smash at the Seattle International Film Festival, of which I was a co-director/programmer. Anyway, this all comes together, trust me...

I was assigned to do a story on the production of "Trouble in Mind" for the Seattle Times, and had dropped by various locations and the production offices throughout the shooting. Alan (I'm just going to call him "Alan," because that's what I'd call him if he were here right now; I'm not trying to be pretentious) decided on this particular day that the best way for me to observe (and, no doubt, to get me out of the way) would be to put me in the center of the action. So, there was this nightclub scene in an old restaurant formerly known as the Trade Winds (it burned down years later) that had been done up as a kind of tiki bar place, complete with a lounge singer in a white shimmery wig. Her twin was a waitress. 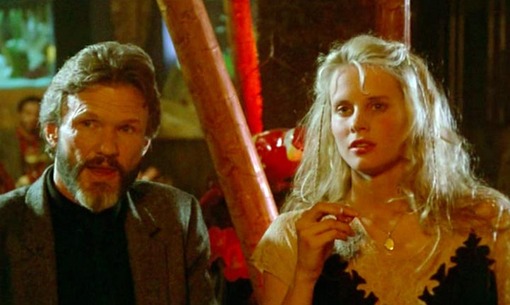 I was seated with my new friend, and a PA on the movie, Eden Ashley (now Umble), daughter of then-LA Times film critic Sheila Benson. While we were sitting there, we decided we would pretend we were on a first date, and improvised characters for ourselves in our awkward conversation. (Somewhere in the Seattle Times archives -- and probably in a box in my garage -- is a feature story about all this.) We had lots of time to, uh, "improvise" because... well, that's the way movie sets are. What I can't forget (because we heard it so many times) are the lyrics to the singer's blasé number:

Love isn't found in poetry Or in a fleeting glance True love's only found Down in... your pants

That's the way the scene starts, and the camera follows the waitress to Kristofferson and Singer's table. And then you see Eden, and me. Kristofferson enters the frame way over on the left, while I'm still visible on the right for about, oh, a half a dozen frames. She gives them their double Spätzels (an absurd name for a drink with little umbrellas in it) and comments on her fabulous onstage twin.

Oh, but I'm not done. Our Market Theater alley, sign and marquee are also featured in another scene in which Lori Singer flees with her baby. I don't remember the plot very well (I never do). When the production wrapped, we bought some of the props for the "Diner" area (named after Barry Levinson's 1982 debut) on the upper level of the Market Theater lobby.

"Trouble in Mind" has never been available on Region 1 DVD, but I recently got ahold of a PAL version from a UK source, so I'm happy to offer you a few frame grabs and further anecdotes below... 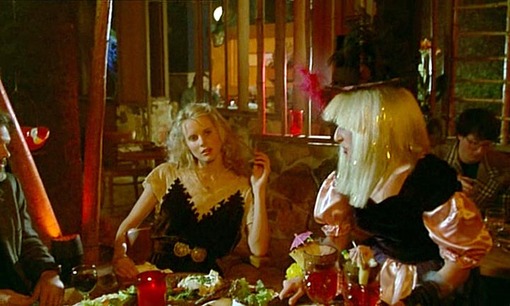 Oh, see, that's a better view of me (in wardrobe). KK, however, is just entering at left... 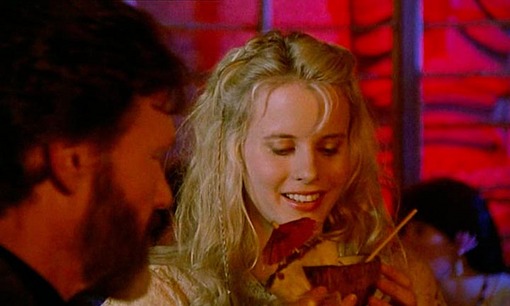 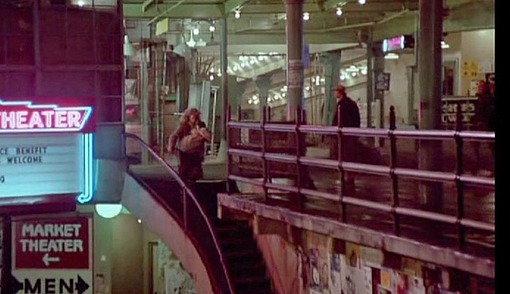 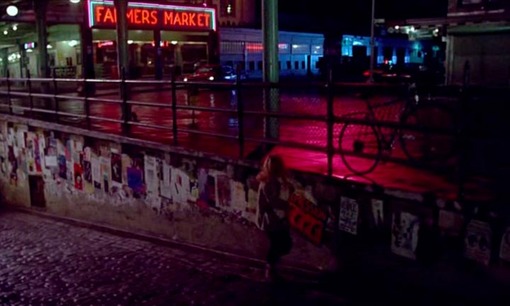 Our alley -- photographed by Toyomichi Kurita! It's also featured in "The Fabulous Baker Boys," where the stairway next door leads to the jazz club in which Jeff and Beau Bridges play. Today, the Market Theater is no longer a movie house but an improv comedy theater. It is also the home of the famous gum wall -- thousands of wads of chewing gum stuck on the brick wall where people wait in line. 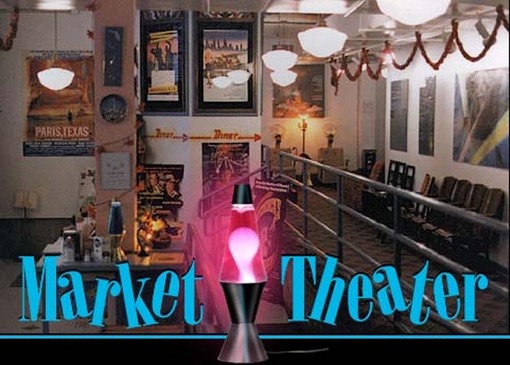 Here is a shot of one part of the Market Theater lobby. The Diner (note signage by Jeff Kurtti) is to the left at the back of the room. Lava Lamps were hard to find in 1984 (we were thrilled when the Coen brothers used one in "Blood Simple"), and one became part of our logo (designed by Ms. Pamela Sprowl). How many movie items do you recognize in this photo? We had lots. From left to right: French 3-sheet for Wim Wenders' "Paris, Texas," which opened around the same time we did; standee for Sergio Leone's "Once Upon a Time in the West"; one-sheet for Sam Fuller's "Underworld USA," which went nicely with the colors of the poster in the backlit panel next to it, for Phil Kaufmann's "The Wanderers"; under that, a one-sheet for Wes Craven's "A Nightmare on Elm Street," which also opened in the fall of 1984 (our first move was Krzysztof Zanussi's "Contract," followed by long runs of Jonathan Demme's "Stop Making Sense," Jim Jarmusch's "Stranger Than Paradise" and Paul Verhoeven's "The 4th Man"; down at the end of the room, above the hairdryer chairs ($40 apiece at St. Vincent De Paul on Lake Union) is a French 3-sheet for Jerzy Skolimowski's "Deep End," another movie I dearly love. 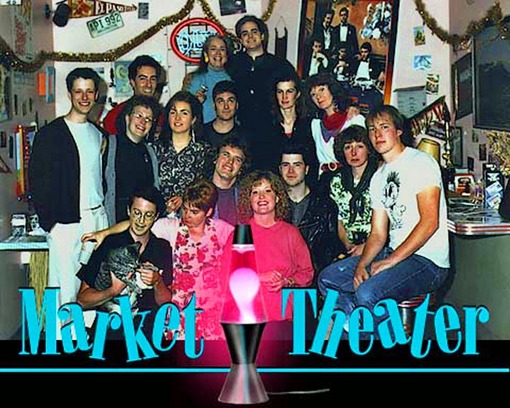 The Marketeers -- our staff at the closing night party in 1988, in the Diner. I am in the lower left, holding our theater cat, Harry Dean, who lived with us from the very start. Ann is next to me. These people are among the best people ever in the world. All you can see from "Trouble in Mind" in this shot, though, is the three-stool counter (on the right) from Wanda's Diner. The clock and other signs are on the wall to the right. 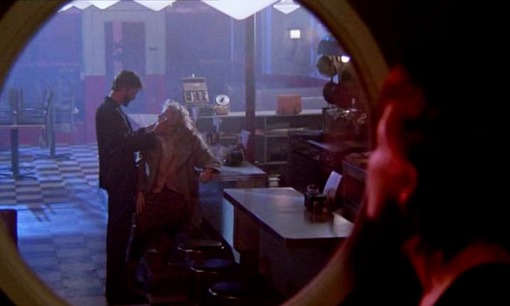 One of the Diner counters. 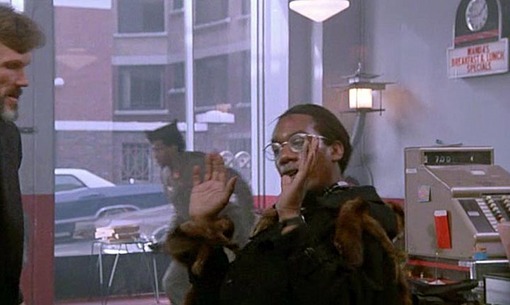 We also got that Wanda's Diner clock (it really works!) on the wall behind and to the right of Joe Morton, who, if memory serves, had a scene inside the Big Clock at the King Street train station, too. 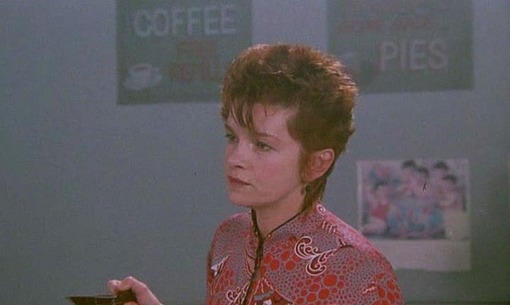 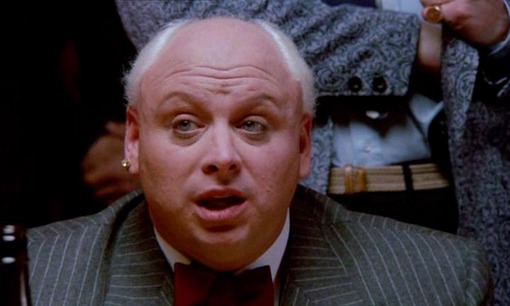 Divine, in his "first all-male role," played gangster kingpin Hilly Blue, who lived in the Volunteer Park Art Museum (now the Seattle Asian Art Museum). I had a lovely lunch with him at a French restaurant behind and to the left of the stairway Lori Singer is descending in one of the previous grabs. No, we did not eat dog poop. 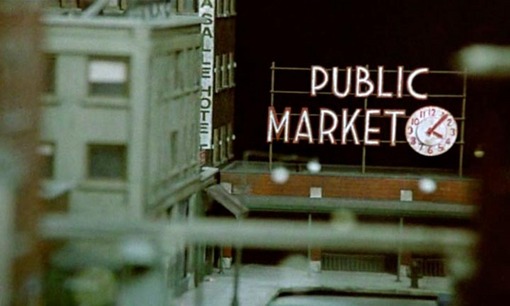 A Seattle miniature used in "Trouble in Mind." John Cameron Mitchell would use a similar technique in "Shortbus." 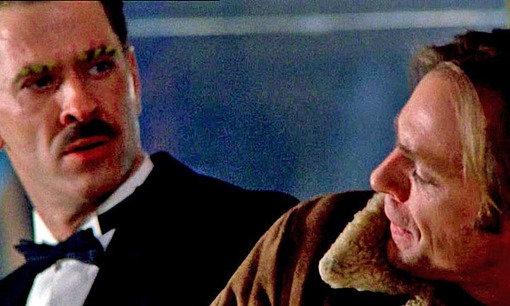 The fellow with the eyebrows who is offended by Keith Carradine sitting so close is my friend Dan Ireland, co-founder of the Seattle International Film Festival, director of such movies as "The Whole Wide World," "Mrs. Palfrey at the Claremont" and "Jolene," and executive producer of "Paperhouse," "The Dead," "Lair of the White Worm" and others. I have suggested he use this image for his Facebook profile picture. He looks exactly the same now, 25 years later (except for the eyebrows). This scene was shot at a restaurant on Seattle's Fourth Avenue called 1904 (the address), which has now long been the home of the delicious Tom Douglas institution, the Dahlia Lounge.