Apart from its other qualities, which are many, Alan Rudolph's “Choose Me” is an audaciously intriguing movie. Its main purpose, indeed, may be to intrigue us -- as other films aim to thrill or arouse or mystify. There is hardly a moment in the whole film when I knew for sure what was going to happen next, yet I didn't feel manipulated; I felt as if the movie were giving itself the freedom to be completely spontaneous.

The movie begins with strangers talking to each other. One of the strangers is a radio talk show host. Her name is Dr. Love, and she gives advice to the lovelorn over the radio (most of her advice seems to be variations on "That's not my problem"). One of her regular callers, we learn, is a woman named Eve who owns a bar. One day a mental patient named Mickey, a guy whose past seems filled with mysterious connections to the CIA, the space program, and the Russians, walks out of a closed ward and into the bar and meets Eve. A few days later, Dr. Love, hoping to do some research into the ways that we ordinary folk live, adopts an assumed name and goes looking for a roommate. She finds Eve and moves in with her, and neither woman knows who the other woman really is. They also don't make the connection that Eve is a regular caller to the radio program (highly unlikely, since Dr. Love speaks with an accent). None of this is really as hard to follow as it sounds. And since one of the pleasures of this movie is the leisurely and logical way it explores the implications of mistaken identity, I'm not going to write another word about the confusions the characters get involved in.

“Choose Me” is a deliberate throwback to the film noir of the 1940s -- to those movies made up of dark streets and wet pavements, hookers under streetlamps, pimps in shiny postwar Studebakers, and people who smoke a lot. It's also about lonely people, but it's not one of those half-witted TV movies about singles bars and single women. It's about smart, complicated people who are trying to clear a space for themselves and using romance as an excavating tool.

The performances are key to this strategy. The best thing in the movie is Genevive Bujold's performance as Dr. Love. She is interesting, if detached, as the radio personality, but when love finally does touch her life, she is so unabashedly open and confessional and red-faced and sincere that we want to hug her. Bujold just gets better and better; coming so soon after her good work in “Tightrope,” this is a reminder of how many different kinds of roles she can play so well.

Keith Carradine is the drifter with the dangerous past. We are never quite sure how seriously to take him, and that's the idea behind his performance, I think: He is able to quite sincerely tell two different women he loves them and wants to marry them, and the funny thing is, we believe him, both times. Eve, the former hooker who owns a bar, is played by Lesley Ann Warren. It's another good performance, nervous and on-edge; she's the kind of woman who seeks a different man every night as a protection against winding up with the same guy for a whole lifetime in a row. There are other intriguing characters in this story, most notably Rae Dawn Chong as a cute young alcoholic with a weird marriage, a naive way of trusting strangers, and dreamy plans of becoming a poet someday. Her husband (Patrick Bauchau) begins to get real tired of seeing the Carradine character, who through a series of misunderstandings seems to specialize in robbing him of poker pots, dates, and the attentions of his wife.

All of these people interact throughout the whole movie without “Choose Me” ever settling into familiar patterns. It's as if Rudolph wanted to tell a story as it might actually have happened, with coincidental meetings, dumb misunderstandings, random chance, and the endless surprises of human nature. At the end of the movie we haven't learned anything in particular, but we have met these people and their loneliness and punch-drunk optimism, and we have followed them a little time through the night. 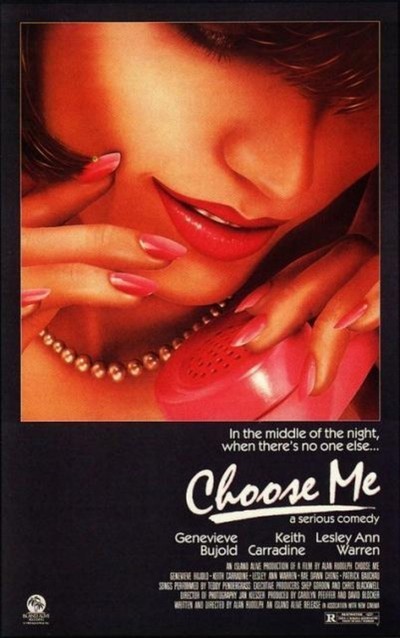