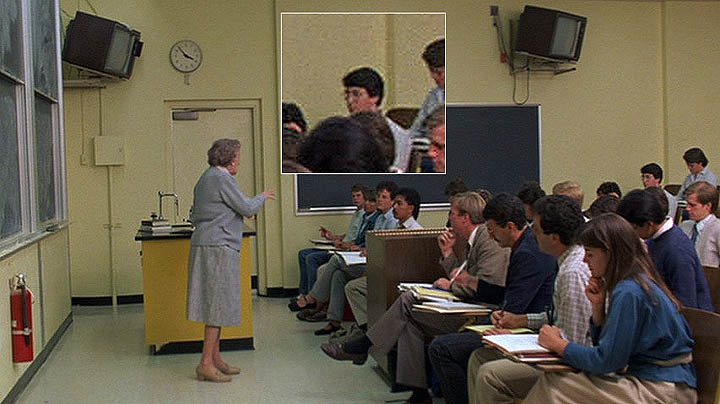 Me. And some other people.

One of the best educations in filmmaking that you can ever get is to spend a day on a set -- even (or maybe especially) as an extra, because that puts you right in the middle of the action, as it were. (When I was doing a Seattle Times story on the shooting of Alan Rudolph's "Trouble in Mind," Alan decided to stick me and my pal Eden, who was also working on the film, into the tiki bar scene, where I could observe everything that was going on all around. We appear as blurs behind the heads of Kris Kristofferson and Lori Singer.)

Anyway, back in 1986 (or early 1987?) my friend Nancy Locke, a longtime Seattle movie publicist, and I were invited to be extras on David Mamet's directorial debut feature, "House of Games." We showed up at Bagley Hall at the University of Washington (my alma mater) and I was put in a classroom, where Lilia Skala was our psych professor. In explaining the scene to us, Mamet mentioned we could now say that we had been directed by David Mamet. So, I'm sayin'.

I don't remember where they used Nancy, or if she made the final cut. (I'll have to ask her.) I do remember we did another semi-surreal scene in the hallway between classes, where we students brushed passed Lindsay Crouse while her character walked in a dazed, almost trance-like state. It was an experiment. They didn't use it.

I was reminded of this experience while looking at the new Criterion Collection edition of "House of Games." Roger Ebert gave the movie four stars, and in 1999 selected it as one of his Great Movies. It's pure Mamet -- hypnotic, suspenseful, surprising -- a noirish con game that reminds me of a Fritz Lang thriller, with stylized performances that hint of Bresson, Fassbinder, or Herzog's "Heart of Glass" (in which the director actually hypnotized the cast), but I've never seen anything quite like it. Three of my favorite actors -- Joe Mantegna, J.T. Walsh and Ricky Jay -- also star. Are you in?