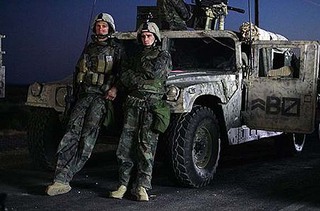 Before I do my proper "ten best" honors (in a form that is not a critics' poll ballot), I just want to say that the best things I saw on any screen in 2008 were:

1) "Generation Kill" (seven-part HBO mini-series, adapted by Ed Burns and David Simon, the makers of "The Wire," and Evan Walker Wright, a reporter embedded with the 1st Recon Marines in Iraq in 2003, based on Wright's book). I don't like the title. At some point in Episode Three I thought this was the funniest show on TV. About 15 minutes later, I still felt so, but I also felt something radically different. Susanna White is one hell of a director.

Just because they didn't play for a week or more on US movie screens doesn't mean they should go unacknowledged (any more than "The Dekalog" or "Fanny and Alexander" should), and I hope to have the opportunity to write about them in depth in 2009. ("Generation Kill" was just released on DVD December 16.)