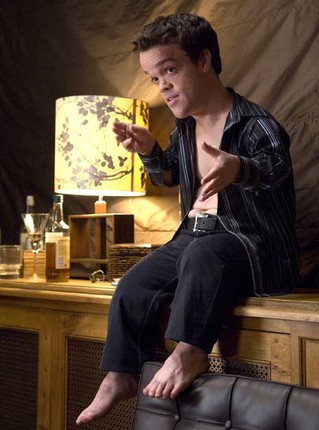 Ten contributors to MSN Movies cast their ballots for the best films of 2008, unaware of what anyone else would pick. A simple point scale was used to weight the choices. And the result is one of the more surprisingly satisfying year-end consensus-mixes I've seen so far. Yeah, I'm one of the participants, and six of my top choices wound up on the aggregate list, but still...

Best of all, each title is accompanied by a micro-mini-essay by one of the critics. It ain't easy compressing one's appreciation into nuggets of less than 250 words, but the effort can occasionally yield its own rewards...

See how that worked out? A mix of accessible popular favorites ("Dark Knight," "Pineapple," "Wall-E," "Slumdog") and... well, critical favorites ("Let the Right One In," "Wendy and Lucy," "The Edge of Heaven," "Christmas Tale"). But here's something I like: None of the Final Ten were #1 on more than two critics' lists, and the most cited films were "Let the Right One In" (8 lists) and "A Christmas Tale" (7 lists), with five of the other titles appearing on half the individual ballots ("The Wrestler," "In Bruges," "The Edge of Heaven," "The Dark Knight," "Wall-E"). The eclecticism is encapsulated in the #1 movie, a hodge-podge of idiosyncratic characters, emotions and stylistic flourishes that comes together as mysteriously and miraculously as the peculiar family it observes.

Mine will probably change before I write it up for Scanners, because the MSN Movies deadline was the first week of December and I'm still catching up with new releases, screeners and my NetFlix queue -- which now includes video on demand via TiVo HD! (Oh boy! I finally got to see Ben Stein's aptly titled "Expelled: No Intelligence Allowed"!)

Here's my MSN Movies list, pretty much the way it plopped out of my head. I just decided to leave it like that:

Here's my blurb about "Pineapple Express" -- the best and funniest Charlie Kaufman/Quentin Tarantino movie of the year, even though it wasn't written or directed by either of them:

Imagine some friends sitting around getting high in front of the TV late one afternoon, and they start fantasizing about the ultimate weed-action-paranoid-gangster-Ninja comedy they'd like to see (and be in, and cast one another in), each of them trying to outdo the others for awesomeness while struggling to maintain concentration. It's possible they might improvise a questionably coherent serial narrative as preposterously inspired as "Pineapple Express" -- if they were comic geniuses like BFFFs Seth Rogen and Evan Goldberg (co-authors of "Superbad"), who conceived and/or smoked this screenplay with some story contributions from their pal Judd Apatow, that is.

To say that "Pineapple Express" is the aforementioned movie, the transcendent stoner-buddy experience suggested by the title (which is also the name of a supreme class of bud), is both necessary and insufficient. "PE" is as conceptually clever and daring as anything by QuentinTarantino or Charlie Kaufman, and funnier besides. A dealer (James Franco, who should vie with Colin Farrell in "In Bruges" for year-end acting honors) and a customer (Rogen) inhale the titular bud and fall down the rabbit hole into a thriller bromance with bad cops and crooks and chases and explosions and guns. Did I mention Ninjas? And in the morning, over eggs and coffee at a greasy spoon, they solidify the legends of the night before, tweaking and spinning them so that they're even cooler and funnier in the retelling.