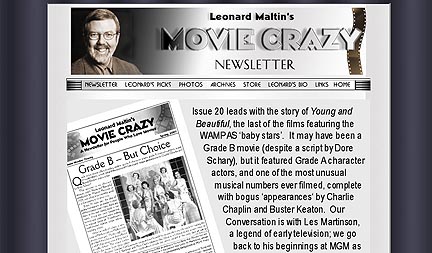 It's a newsletter and a web site!

Nobody does a better job of reminding us that movies are always in the present tense, no matter how long ago they were made, than movie historian, critic, and (above all) enthusiast Leonard Maltin, who's celebrating the fifth anniversary of his own, personal movie-zine, "Leonard Maltin's Movie Crazy" ("A Newsletter for People Who Love Movies"). That's right -- it's a newsletter. As in, printed on paper and snail-mailed to you. The "Collector's Corner" of the most recent issue (which just arrived in my mailbox today), appropriately features some vintage promotional envelopes -- one from RKO studios, and one "Direct From Location" in Old Tucson, AZ, for Wesley Ruggles' "Arizona," starring Jean Arthur. I love Jean Arthur. Almost as much as Barbara Stanwyck.

Though he also has a web site (and writes a "Journal" -- not a blog!), I love that someone of Leonard's stature still puts out a good, analog-style newsletter. (Could we consider it "artisanal"?) But, of course, it's also perfectly in character for Leonard, someone whose passion for movies has always been deeply personal as well as professional. (I take pride in getting Leonard on the web in the first place. He used to fax his weekly columns to me at Cinemania Online, which was a bit "klugey," as we used to say. So, I went to his house and set him up on e-mail in 1996 or so. Leonard was an ebay early-adopter -- for his astounding collection of movie memorabilia, of course -- and once he discovered e-mail, he took to it like a sprocket to celluloid.)

The new issue features an interview with 92-year-old Leslie Martinson, a television director and former MGM script supervisor who worked for Vincente Minnelli, John Huston, Sam Wood, Rouben Mamoulian and others, and who has plenty of stories to tell -- including anecdotes about Gene Kelly and Fred Astaire. "Long before I had any real awareness of directors and their careers, I knew the name Leslie H. Martinson," Leonard writes, recalling his days as a budding auteurist. "No one who watched television in the 1950s and '60s could have avoided seeing that name. It was emblazoned on countless TV shows, ranging from "Topper" and "The Millionaire" to every Warner Bros. show imaginable, when that studio dominated the airwaves..." Martinson directed episodes of such series as "Maverick," "Hawaiian Eye," "77 Sunset Strip," "Mannix," "Mission: Impossible," "ChiPs," and "Dallas" -- and some movies, too ("Lad: A Dog," "PT 109," the 1966 feature "Batman," based on the hit TV show).

The cover story, "Grade B -- But Choice," is devoted to an obscure 1934 musical called "Young and Beautiful," featuring "budding starlets, grade-A character actors, grade-B musical numbers, a pair of vaudevillians, a look behind the scenes of Hollywood, bogus appearances by Charlie Chaplin and Buster Keaton and a script by Dore Schary" [later famous as a producer of films such as "Crossfire," "Mr. Blandings Builds His Dream House," "They Live By Night" and "The Red Badge of Courage"].

Maltin describes "one of the most bizarre musical numbers ever staged, in which actors wearing full-face masks of major stars appear on stage together," along with the WAMPAS girls, beauties selected by the Western Association of Motion Picture Advertisers -- an organization that, between 1922 and 1934, chose an annual list of promising "Baby Stars," which included Clara Bow, Mary Astor, Fay Wray, Joan Crawford, Janet Gaynor, Lupe Valez, Jean Arthur (!), Ginger Rogers and Gloria Stuart.

These stars were not on display in "Young and Beautiful," however. (Betty Bryson, anyone? Dorothy Drake? Hazel Hayes? Lucile Lund? Neoma Judge?) Imagine this:

At first, youre not sure whether or not to believe your eyes; many of the caricature masks are quite good. Some of the performers adopt the actors' body language, and appear in costumes from the stars' most recent roles: John Barrymore as he appeared in "Reunion in Vienna," Wallace Beery as Pancho Villa from "Viva Villa," George Arliss as "The Iron Duke," Joe E. Brown in uniform from "Son of a Sailor," Eddie Cantor in costume from "Roman Scandals," along with Clark Gable, Maurice Chevalier, Adolphe Menjou, Jimmy Durante, Charlie Chaplin, Buster Keaton, Stan Laurel and Oliver Hardy. After an introductory sequence, the bogus stars participate in a kind of elaborate parade with the WAMPAS lovelies.

If that doesn't sound tantalizing, I don't know what will.

Believe it or not, "Young and Beautiful" is still available on VHS from Turner Classic Movies.

Thanks, Leonard! Here's to five -- or 55 -- more years of film fanaticism. You're right: "We movie nuts have to stick together..."