First but least, as always, it's time for the National Board of Review selections. Their top pick: Danny Boyle's "Slumdog Millionaire," which was also the fave in Toronto in September. No, I still haven't figured out who these people are, either, but they've been doing this sort of thing for 99 years and describe themselves on their web site as "the oldest organization devoted to motion pictures as art and entertainment." OK. 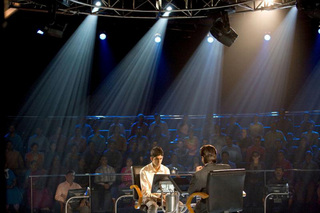 "The Curious Case of Benjamin Button"

In addition to naming five top docs (plus winner, "Man on Wire") and five top "foreign language films" (plus winner "Mongol"), the NBR also picks ten cherce "indies" -- so as to spread the love publicity around:

"In Search of a Midnight Kiss"