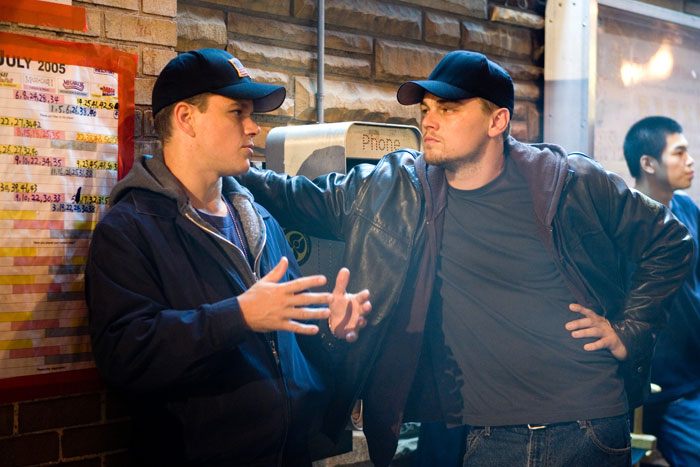 Who's the good guy and who's the bad guy? Matt Damon and Leonardo DiCaprio in "The Departed."

I have an essay over at MSN Movies on Martin Scorsese's morally conflicted characters -- in "Mean Streets," "Taxi Driver," "Raging Bull," "The Last Temptation of Christ," "Casino" and "The Departed." It's called "GoodFellas and BadFellas," and it's about crooks, cops, saints, sinners and (of course) Catholic guilt in movies with and without God. An excerpt:

By the time of "GoodFellas" and "Casino," Scorsese's mobsters are no longer troubled by guilt over their actions, because there's no God taking notice of them.

Instead, they aim for an infallible position in the heirarchy of men where they can get away with anything in the name of piling up cash. People make mistakes -- like whacking a made guy -- and they pay the price, but there's no spiritual dimension to these wiseguys' transgressions. You break the rules, you fall out of favor, that's all.

Narrator-protagonists Henry Hill (Ray Liotta) in "GoodFellas" and Sam "Ace" Rothstein (De Niro) in "Casino" are attracted to the mafia and Las Vegas, respectively, because they offer godlike status through earthly immunity. As a boy, Henry watches the gangsters across the street and marvels that they could get away with whatever they wanted and nobody, not even the cops, would complain.

For Ace, Las Vegas is a return to the Garden of Eden. We see him whisked from a limo through the glittery gates of Paradise (the Tangiers Hotel and Casino) as he recounts his ascension to a state of grace: "Anywhere else in the country I was a bookie, a gambler, always looking over my shoulder, hassled by cops day and night. But here, I'm 'Mr. Rothstein.' I'm not only legitimate, but running a casino, and that's like selling people dreams for cash ... Las Vegas washes away your sins. It's like a morality car wash. It does for us what Lourdes does for humpbacks and cripples. And along with making us legit comes cash. Tons of it." [...]

"As far back as I can remember I always wanted to be a gangster," declares Henry Hill at the start of "GoodFellas." "To me, being a gangster was better than being President of the United States." Looking at "GoodFellas" today, you may wonder what's the big diff. The world is divided into "somebodies" (us) and "nobodies" (them), and any measures taken by the elect -- including fraud, torture and execution -- is justifiable in the cause of preserving their way of life.

A U.S. postman is kidnapped and (briefly) detained by wiseguys who threaten to put him in a pizza oven if he delivers any more truant notices from Henry's school. The freeze-framed shot of the "nobody" mailman's head shoved near the opening of the oven could almost be a snapshot from Abu Ghraib. "How could I go back to school after that and pledge allegiance to the flag and sit through good government bulls***?" Henry wonders. Yeah, how?

Henry explains what it means to be a "good fella, a good guy," as the camera glides over the bones of a devoured feast at the Bamboo Lounge -- a meal nobody at the table will pay for. "To us, those goody-good people who worked [s*****] jobs for bum paychecks and who took the subway to work every day, worried about their bills, were dead. They were suckers ... If we wanted something, we just took it. If anyone complained twice, they got hit so bad believe me they never complained again. It was all routine, you didn't even think about it. "

These are the words of a sociopath, reminiscent of Enron, where traders joked about fleecing "Grandma Millie" during the 2000 California energy crisis. Or, in the famous words of a Bush White House aide, reported by Ron Suskind in 2004: "When we act, we create our own reality. And while you're studying that reality -- judiciously, as you will -- we'll act again, creating other new realities, which you can study too, and that's how things will sort out. We're history's actors ... and you, all of you, will be left to study what we do." From there, it isn't far to Henry's statement from a bit later in the movie: "Murder was the only way that everybody stayed in line. You got out of line, you got whacked. Everybody knew the rules ... Shooting people was a normal thing. It was no big deal."

Inside the casino, Scorsese cuts from table-level close-ups of cards and dice to cosmic God's-eye-views, as Ace outlines his moral universe. Sure, the casinos are owned by gangsters, and millions are skimmed straight out of the counting room, but from the point of view of the man in the middle like Ace, the bosses are the gods and the only real sinners are the cheaters.