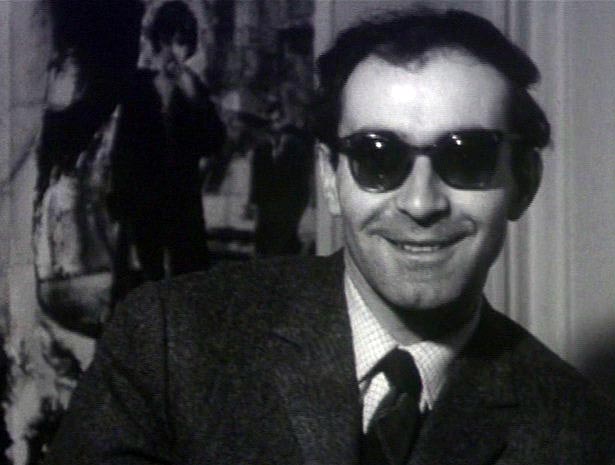 Following up on my recent posts about the commercial realities behind mid-century European "art films," and the various ways critics make sales pitches to exclusive audiences: Here's something fun and provocative from a 1964 French TV interview with Jean-Luc Godard, excerpts of which are included on the extras disc for the Criterion edition of "Contempt." (I transcribed the subtitles.) Like famed producer Bruce Dickinson, Godard put his pants on one leg at a time, but once they were on he made hits:

Q: Jean-Luc Godard, with "Contempt" you're once again on everyone's lips....

G: So much the better if it helps the movie.... I wouldn't really care as long as they go to my movies. That's what's important.

Q: What do you think of reviews?

G: I think much more highly of them than most people do. It's probably because I was a critic once, and I said a lot of bad things. I was cruel and mean to a lot of people. And though my opinions haven't changed, when I read bad reviews, the important thing for me is the discussion that's taking place. Whether it's good or bad is not the issue for me....

Q: Do you believe there's such a thing as a fair review?

G: (shrugs) Yes, but criticism isn't an artistic creation. It will always be inferior. Seventy-five percent of critics are only in that line of work temporarily. That's why critics are always bitter and sad towards those they praise and those they disparage.

Q: You became a director after having been a critic. Do you think it's a step up?

G: Yes, being a critic was a good experience. It's good training.

Q: Doesn't it run the risk of stifling the imagination?

G: No. It made me love everything. It taught me not to be narrow-minded, not to ignore Renoir in favor of Billy Wilder, or something like that. I like them both, even though they are extreme opposites. [...]

Q: ... Even with all her clothes on, ["Contempt" star Brigitte Bardot is] still a gold mine. [...] Those who would like to see Miss Bardot undress in a movie made by a bad or vulgar director wouldn't dare go see it. But with you their conscience is clean because it's art --

Q: Some of your films have been failures. How does that affect you?

G: One of my films in particular, "Les Carabiniers," wasn't even a failure. It was... nothing at all.

Q: Were you expecting that?

G: No, not at all. I found the subject matter too -- too "whorish," if you'll pardon the expression. But, on the contrary, people -- I think it was because it was an honest film about war that showed -- People couldn't take it. They have better things to do. These days they want to go to the beach or to the countryside. They don't feel like watching war scenes, unless it's something like "The Longest Day." There they can feel proud, like they lived through the Normandy landing, defeated 15 million Germans and took Berlin. They're delighted.

[Editor's note: In a separate interview with Fritz Lang, on the same disc, Godard says "You can't make a war movie in France," in part because the French don't like to be reminded of the extent to which they collaborated with the Nazis during the German occupation. Especially interesting, then, that a few years later, in 1969, Jean-Pierre Melville -- dismissed as aesthetically conservative and old-fashioned by many French critics of the time -- made his "war movie," "Army of Shadows," about the French Resistance. As Andrew Sarris wrote in 2006: "Ironically, ["Army of Shadows"] received mixed reviews from the French critics, especially the post–nouvelle vague reviewers at Cahiers du Cinema, who dismissed it as an outdated homage to the deposed and discredited Charles de Gaulle after the riots of 1968. Marcel Ophuls’ "The Sorrow and the Pity" (1969) came out just after "Army of Shadows," and it reflected a widespread skepticism in France and elsewhere about the true extent of French resistance to the German occupation.]

Q: What did you feel when you saw the theater was practically empty?

G: It really hurt my feelings, because I felt I had made a serious mistake. I wanted to teach people something yet make it interesting as a show. But not only did it not interest them, they were wary of it and didn't set foot in the theater.

I always say, the dream of the New Wave when you've been a critic and then you start making films, my personal dream, then and now, has been to make a film with a five-million-dollar budget on the large MGM set in Hollywood. It's a dream that will never come true. [...]

Q: Can cinema be a pure profession?

G: I think so. It consists of so much compromise that in the end it has to lead to purity.

Q: At a time when young filmmakers like Francois Reichenbach and Louis Malle are taking up television, what do you think of television?

G: Television is the same thing [as cinema]. For me, it's a means of transmission. I don't know why people in television and film are mad at each other. They're idiots on both sides, because we're trying to do the same thing. It's all show business in one form or another. It's about engaging people's interest and teaching them something. Personally, I would be sad if film ceased to exist. [But] I would do television. Television broadcasts things....

For instance, you're interviewing me about my life and my ramblings. I think it's of little interest because people don't know me, and what I am can't be of interest to them. You should ask me what I think about Europe or Vietnam. But when you have very famous people like de Gaulle or Pompidou, then, yes, you should ask them very personal questions, like the color of their socks or what brand of soup they like.

Q: Don't you think we all dream of doing that?