From zombies to Pasolini: Movies as schoolyard dares

"Anyone who leaves the cinema doesn't need the film, and anybody who stays does."  -- Michael Haneke on his first version of "Funny Games"

In 1982, I took my 21-year-old sister to see "Poltergeist." When it was over, she turned to me with tears in her eyes and said, "You have ruined my life." It was traumatic for her. I showed John Carpenter's "Halloween" in college and the experience so deeply shook a good friend of mine that she spent several sessions in therapy talking to "The Shape" (as he was billed). 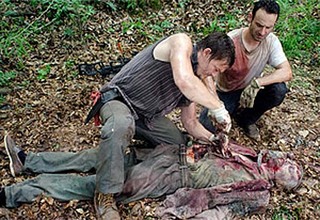 This entered my mind while watching the second-season premiere of AMC's "The Walking Dead" last Sunday night (the zombies are metaphors for zombies) -- the monotonously gruesome series that featured a squishy backwoods autopsy scene in which two humans decide to cut open the stomach of a head-shot "walker" to find out if he'd recently eaten the little girl they're looking for. The obvious analogue is to the shark-belly autopsy from "Jaws," but this one was just an excuse to make the audience squirm on the way to a dumb punch line (How much woodchuck could a zombie chew up before it makes you upchuck, Chuck?).

Part of the thrill of watching a horror movie is the sense of triumph and relief you have at the end: "See? I made it through that -- and I survived!" Some movies are conceived and sold that way. It isn't so far from the William Castle-like gimmicks of having ambulances outside the theater or nurses in the lobby or barf bags at the concessions stand, to the hysteria of "The Exorcist" in 1973 (considered a rite-of-passage test of courage for teens and college students everywhere) to more recent phenomena like the "Saw" and "Hostel" movies. 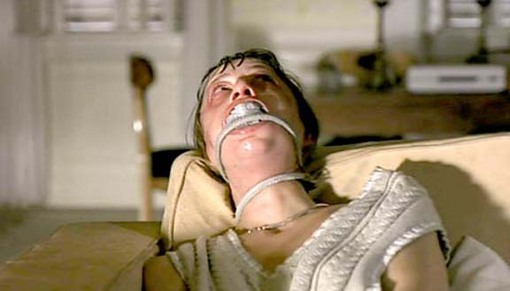 And sometimes art house pictures are presented or treated the same way. We've been over this kind of thing a number of times at scanners, with regard to Michael Haneke's "Funny Games and Gaspar Noe's "Irreversible," to name a couple. I wrote of the original "Funny Games":

"Funny Games" is an experiment along the lines of the famous Milgram and Stanford prison experiments. In other words, the movie is also an incitement to action. To politely and willingly submit to the movie's terms of authority is to sheepishly put yourselves in the same position as the captives in the movie, to accept its premise that "You brought this on yourself."

And of Dennis Cozzalio's decision not to subject himself to the rape scene from "Irreversible," I pondered:

I think of all movies as experiences, and there have been times in my life when I wanted to have as many experiences as possible, just to get them under my belt, to understand what they were like. Does that mean I want to have all experiences, without choosing (when possible) which to embrace and which to forego? No. I certainly have seen things in waking life (and in dreams) that I wish I hadn't seen -- and I have had the feeling that seeing certain films has diminished me as a human being (I'm talking to you, "Porky's 3: The Revenge.")

This exercise of free will has become a favorite topic of mine over the last nearly two decades since I stopped reviewing movies on a daily basis after seeing, if not necessarily reviewing, the bulk of what was released between about 1977 and 1993. What eventually got to me was not that so many movies were poorly made or misconceived (at least 80 percent, I'd estimate), but that they were uniformly bad. I didn't feel I was learning much from watching filmmakers repeat the same stupid mistakes -- most of which had to do with slavish, unimaginative notions about "story structure" that they'd had drilled into them by screenwriting manuals or development executives.

We have to face a few realities here: 1) Nobody can see, much less write about, every movie, even every "new" movie; 2) Time, availability, scheduling, spending money and other factors make it unlikely you will ever catch up with all the important, worthwhile movies you should see from the past (which keeps getting longer) or in the future (which keeps getting shorter). When I started writing about movies, I could only see them when they were made available to me in a particular time and place -- determined, almost always, by someone else. That is, somebody had to obtain a print and schedule a screening somewhere. Even movies that were shown on TV played on a certain channel at a specified hour and if you weren't in front of the set, tuned to that station when it was shown, you didn't see it.

This, obviously, is no longer the world we live in. 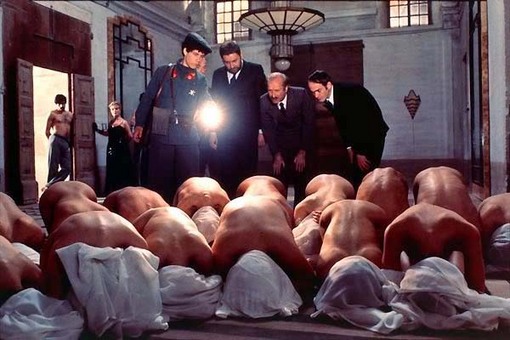 Which brings me to something Glenn Kenny wrote at Some Came Running recently ("The 'Salò' imperative, such as it is") that I wanted to find an excuse to quote. It seems that David Haglund at Slate published a post called "Must Film Buffs Watch the Revolting Salò?," about the new Criterion Collection Blu-ray release of Pier Paolo Pasolini's long-unavailable, "controversial and harrowing" (sorry for the clichés), "Salò: 120 Days of Sodom," in which he wrote that four out of five critics he surveyed thought the movie needed to be seen:

"Salò" depicts the sadistic debauchery of a Duke, a Bishop, a Magistrate, and a President in the Nazi-puppet state from which Mussolini ruled Italy. It draws from Dante's Inferno as well as the Marquis de Sade's 120 Days of Sodom and notoriously features "rape, torture, coprophagy, mutilation, and murder," as Richard Brody details in his capsule review for The New Yorker (subscription required). "The film is essential to have seen but impossible to watch," Brody adds: "a viewer may find life itself defiled beyond redemption by the simple fact that such things can be shown or even imagined."

So what if you consider yourself a serious film lover but don't want to find life itself defiled? Do you have to watch this movie? And will you regret it? 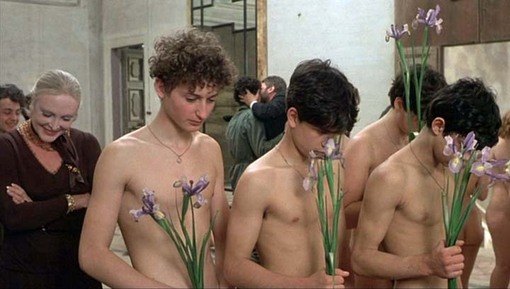 This is where, as we once said of Peter Frampton, Kenny comes alive:

This whole notion of film "buff"-dom, and/or cinephilia, as a kind of contest; I never got it. No one individual knows the entirety of film history; no one has seen everything; no one can speak with authority on every film, every filmmaker. Enthusiasts are enthusiasts, and yes, "professional" critics ought to have seen more, and processed more, than laymen or enthusiasts or what have you. The notion that you're going to get thrown out of some club if you don't "subject" yourself to film X seems entirely ridiculous. And while I'd be the first to argue, very strongly, that a wide viewing background and some substantial historical context is essential not just to persuasive and engaging critical writing but also to critical thinking itself, even the most learned and erudite will find themselves in a position when they're obliged to bluff, punt, or just pass on the subject. 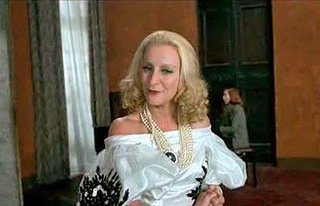 This might seem an especially inapt way to put it, but I personally don't give a shit whether you've seen "Salò" or not. I've seen it, I may watch it again now that it's out on Blu-ray (once my PS3 is replaced), but your having seen it is not the linchpin on which I'm going to base my assessment of either your cinephilia or your critical intelligence. I bring it up because I find (and you may be surprised to discover this) the whole perspective of the discussion to be kind of dispiriting; this whole sense of "Salò" as a kind of totem of all that is reprehensible in cinematic imagery and hence reducible to a parlor game acid test, the art-film equivalent of "The Human Centipede," for the adults in the room. Except discussing it on that particular level simply is not adult... [...]

For many reasons it's a shame that "Salò," a deliberately unreasonable cinematic disgorgement of despair, was Pier Paolo Pasolini's final film; it gives it the aura of a testament that it was likely not intended to be. I wrote about the film myself for what was then known as The Auteurs' Notebook, and concluded, "as an examination of any facet of fascism in particular, or power relations in general, "'Salò' is a welter of incoherence." I said "welter," and I meant "welter," and if I watch "Salò" again, it will be to reexamine my own assessment of it, not for the sake of testing my tolerance for unpleasant imagery. Again: Cinephilia is not a game of "Guts," for fuck's sake. Criticism even less so.