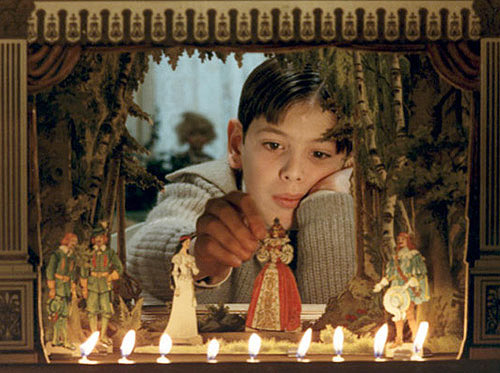 David Bordwell weighs in on the Great Debate of August with a substantial post called "Bergman, Antonioni, and the stubborn stylists," in response to Jonathan Rosenbaum -- who gives his verdict on a recent viewing of "Fanny and Alexander."

Timing aside, there wasn’t much in the piece that hasn’t been said by certain cadres of cinephiles for decades. Back in the 1960s, people called Bergman “theatrical,” “uncinematic,” pretentious, and intellectually shallow. He was even accused of hypocrisy. His spiritual, philosophical films always seemed to depend on a surprising number of couplings, killings, rapes, and gorgeous ladies, often naked. Rosenbaum contrasts Bergman with Bresson and Dreyer, more austere religious filmmakers as well as great formal innovators, and this gambit too is familiar from late-night film-society disputes. Jonathan’s case is news in the good, grey Times, but it’s an old story among his (my) generation.

I think that this generational antipathy has many sources. While Bergman had considerable academic cachet, this may have hurt him with smart-alecks like us. Cinephile priests and professors told us that Bergman was a great mind, but we suspected them of snobbery, for they often disdained even foreign filmmakers who dabbled in popular genres. Kurosawa was admired for "Rashomon" and "I Live in Fear" rather than for "The Seven Samurai" and "Yojimbo." And many of Bergman’s intellectual fans despised the classic tradition of American studio film. Hitchcock had not yet convinced literature profs of his excellence, and Ford was a gnarled geezer who made Westerns. Bergman and his acolytes seemed just too square. Our money was on Godard, especially after Susan Sontag’s magisterial essay on him. [...]

Speaking just for myself, I didn’t have a deep love for Bergman, and I still don’t. I was drawn to his early idylls ("Monika," "Summer Interlude") and impressed but chilled by the official classics ("Smiles of a Summer Night," "The Seventh Seal," "The Virgin Spring"). "Persona," I admit, was a punch in the face. Seeing it in its New York opening, I felt that all of modern cinema was condensed into a mere eighty minutes. But no Bergman film afterward measured up to that for me, and after "The Serpent’s Egg" I just lost interest, catching up with "Cries and Whispers," "Scenes from a Marriage," "Fanny and Alexander," and a very few others over the later decades.

We can talk tastes forever. Maybe you think Bergman is great, or the greatest, or obscenely overrated. I think that there’s something more general and intriguing going on beyond our tastes. What makes this hard to see is that the venues of popular journalism don’t allow us to explore some of the ideas and questions raised by our value judgments.

Take some of Rosenbaum’s criticisms, which Roger Ebert has persuasively answered. I’d add that Jonathan is sometimes applying criteria to Begman that he wouldn’t apply to directors he admires. Bergman isn’t taught frequently in film courses? So what? Neither is Straub/Huillet or Rivette or Bela Tarr. Bergman is theatrical? So too are Rivette and Dreyer, both of whom Rosenbaum has written about sympathetically.

More importantly, Jonathan’s critique is so glancing and elliptical that we can scarcely judge it as right or wrong. A few instances...

Be sure to read the entire piece.

And, in case you missed it, Rosenbaum offered his assessment of Bergman's "Fanny and Alexander" in a Scanners comment below:

Last night I saw the three-hour version of "Fanny and Alexander" -- the version that Bergman himself regarded as the compromised theatrical version (which is also the one that ranked so highly among critics in the Sight and Sound poll), not the much longer director's cut made for Swedish TV. The latter is also available in the same Criterion box set, though I haven't encountered much evidence that most of my colleagues outside of Scandinavian countries, including those who rank Bergman so highly and profess to be scholars of his work, have bothered to see it.

Sorry, guys, but I saw the three-hour "Fanny and Alexander" back to back with the 1953 "Sawdust and Tinsel," and I much prefer the earlier film. Both are impressive in some ways, but the earlier film is far more impressive to me. Maybe I'd feel differently about the five-hour version, but that's not the version people have been criticizing me for not seeing.

For a very smart and adept estimation of what's good and what's not so good in the three-hour "Fanny and Alexander," check out Pauline Kael's detailed review. Don't come back to me with Oscar nominations. After all, the vile racism of "The Deer Hunter" as well as what I assume is the boring wartime propaganda of "Mrs. Miniver" were both validated and ratified with best-picture Oscars.

To all the most vocally fervent Bergman and "Fanny and Alexander" supporters out there: when are you going to see the original 312-minute TV version and explain why the 188-minute version is presumably better? Even Kael seemed to imply that when she concluded her review by noting that Bergman ALSO made a TV version, failing to acknowledge that the shorter version was simply a digest that Bergman had to put together in order to get the film shown in theaters.