Akira Kurosawa's "Seven Samurai" (1954) is not only a great film in its own right, but the source of a genre that would flow through the rest of the century. The critic Michael Jeck suggests that this was the first film in which a team is assembled to carry out a mission--an idea which gave birth to its direct Hollywood remake, "The Magnificent Seven," as well as "The Guns of Navarone," "The Dirty Dozen" and countless later war, heist and caper movies. Since Kurosawa's samurai adventure "Yojimbo" (1960) was remade as "A Fistful of Dollars" and essentially created the spaghetti Western, and since this movie and Kurosawa's "The Hidden Fortress" inspired George Lucas' "Star Wars" series, it could be argued that this greatest of filmmakers gave employment to action heroes for the next 50 years, just as a fallout from his primary purpose.

That purpose was to make a samurai movie that was anchored in ancient Japanese culture and yet argued for a flexible humanism in place of rigid traditions. One of the central truths of "Seven Samurai" is that the samurai and the villagers who hire them are of different castes and must never mix. Indeed, we learn that these villagers had earlier been hostile to samurai--and one of them, even now, hysterically fears that a samurai will make off with his daughter. Yet the bandits represent a greater threat, and so the samurai are hired, valued and resented in about equal measure.

Why do they take the job? Why, for a handful of rice every day, do they risk their lives? Because that is the job and the nature of the samurai. Both sides are bound by the roles imposed on them by society, and in To the Distant Observer, his study of Japanese films, Noel Burch observes: "masochistic perseverance in the fulfillment of complex social obligations is a basic cultural trait of Japan." Not only do the samurai persevere, but so do the bandits, who continue their series of raids even though it is clear the village is well-defended, that they are sustaining heavy losses, and that there must be unprotected villages somewhere close around. Like characters in a Greek tragedy, they perform the roles they have been assigned.

Two of the movie's significant subplots deal with rebellion against social tradition. Kikuchiyo, the high-spirited samurai played by Toshiro Mifune as a rambunctious showoff, was not born a samurai but has jumped caste to become one. And there is a forbidden romance between the samurai Katsushiro (Isao Kimura) and a village girl (ironically, the very daughter whose father was so worried). They love each other, but a farmer's daughter cannot dream of marrying a ronin; when they are found together on the eve of the final battle, however, there are arguments in the village to "understand the young people,” and an appeal to romance--an appeal designed for modern audiences and unlikely to have carried much weight in the 1600s when the movie is set.

Kurosawa was considered the most Western of great Japanese directors (too Western, some of his Japanese critics sniffed). "Seven Samurai" represents a great divide in his work; most of his earlier films, Jeck observes, subscribe to the Japanese virtues of teamwork, fitting in, going along, conforming. All his later films are about misfits, noncomformists and rebels. The turning point can be seen in his greatest film, "Ikiru" (1952), in which a bureaucrat spends his days in the rote performance of meaningless duties but decides when he is dying to break loose and achieve at least one meaningful thing.

That bureaucrat was played by Takashi Shimura--who, incredibly, also plays Kambei, the leader of the seven samurai. He looks old and withered in the 1952 picture, tough and weathered in this one. Kurosawa was loyal to his longtime collaborators, and used either Shimura, Mifune, or often both of them, in every movie he made for 18 years.

In "Seven Samurai," both actors are essential. Shimura's Kambei is the veteran warrior, who in an early scene shaves his head to disguise himself as a priest in order to enter a house where a hostage is being held. (Did this scene create the long action-movie tradition of opening sequences in which the hero wades into a dangerous situation unrelated to the later plot?) He spends the rest of the movie distractedly rubbing his bristling head during moments of puzzlement. He is a calm, wise leader and a good strategian, and we follow the battles partly because he (and Kurosawa) map them out for us, walk us through the village's defenses and keep count as the 40 bandits are whittled down one by one. Mifune's character, Kikuchiyo, is an overcompensator. He arrives equipped with a sword longer than anyone else's and swaggers around holding it over his shoulder like a rifleman. He is impulsive, brave, a showoff who quickly assembles a fan club of local kids who follow him around. Mifune was himself a superb athlete and does some difficult jumps and stunts in the movie, but his character is shown to be a hopeless horseman. (As a farmer's son, Kikuchiyo would not have had an opportunity as a youth to learn to ride.) One running gag involves Kikuchiyo's inability to master an unruly local horse; there is a delightful moment where horse and rider disappear behind a barrier together, and emerge separately.

The movie is long (207 minutes), with an intermission, and yet it moves quickly because the storytelling is so clear, there are so many sharply defined characters, and the action scenes have a thrilling sweep. Nobody could photograph men in action better than Kurosawa. One of his particular trademarks is the use of human tides, sweeping down from higher places to lower ones, and he loves to devise shots in which the camera follows the rush and flow of an action, instead of cutting it up into separate shots. His use of closeups in some of the late battle scenes perhaps was noticed Orson Welles, who in "Falstaff” conceals a shortage of extras by burying the camera in a Kurosawian tangle of horses, legs, and swords.

Repeated viewings of "Seven Samurai" reveal visual patterns. Consider the irony, for example, in two sequences that bookend the first battle with the bandits. In the first, the villagers have heard the bandits are coming, and rush around in panic. Kambei orders his samurai to calm and contain them, and the ronin run from one group to the next (the villagers always run in groups, not individually) to herd them into cover. Later, after the bandits have been repulsed, a wounded bandit falls in the village square, and now the villagers rush forward with delayed bravery to kill him. This time, the samurai hurry about pushing them back. Mirrored scenes like that can be found throughout the movie.

There is also an instinctive feeling for composition. Kurosawa constantly uses deep focus to follow simultaneous actions in the foreground, middle and background. Often he delineates the distance with barriers. Consider a shot where the samurai, in the foreground, peer out through the slats of a building and across an empty ground to the sight of the bandits, peering in through the slats of a barrier erected against them. Kurosawa's moving camera often avoids cuts in order to make comparisons, as when he will begin on dialogue in a closeup, sweep through a room or a clearing, and end on a closeup of another character who is the point of the dialogue.

Many characters die in "Seven Samurai," but violence and action are not the point of the movie. It is more about duty and social roles. The samurai at the end have lost four of their seven, yet there are no complaints, because that is the samurai's lot. The villagers do not much want the samurai around once the bandits are gone, because armed men are a threat to order. That is the nature of society. The samurai who fell in love with the local girl is used significantly in the composition of the final shots. First he is seen with his colleagues. Then with the girl. Then in an uncommitted place not with the samurai, but somehow of them. Here you can see two genres at war: The samurai movie and the Western with which Kurosawa was quite familiar. Should the hero get the girl? Japanese audiences in 1954 would have said no. Kurosawa spent the next 40 years arguing against the theory that the individual should be the instrument of society. 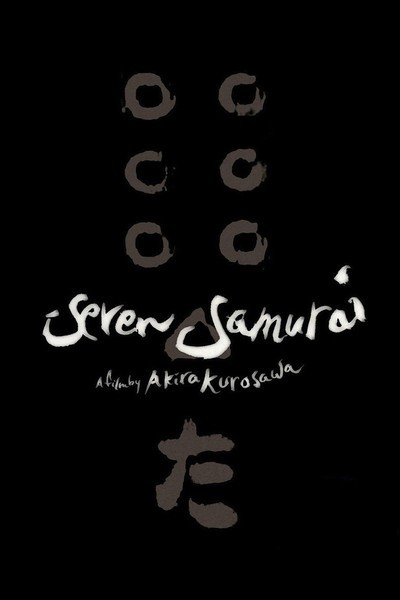