The tweet from Errol Morris came through a little before noon on Saturday, January 30:

SENSELESS TRAGEDY: My beloved editor Karen Schmeer was killed last night by a car used in the robbery of a drugstore. She was 39 years old.

It was a freak hit-and-run accident just before 8 p.m.on the Upper West Side of Manhattan. Karen Schmeer, on her way home from working on an HBO documentary about chess player Bobby Fischer, was crossing Broadway at 90th when she was struck by a rented 2010 Dodge Avenger, which was being pursued by police following a Zyrtec robbery at the CVS pharmacy on 86th and Amsterdam. The alleged driver was arrested and charged with second degree murder. Two other male suspects fled on foot.

She was "one of the greatest editors of her generation" Barker told the New York Times. Morris credited Schmeer, a Boston University anthropology grad who started in his office as an unpaid research intern, with "saving" his film "Fast, Cheap & Out of Control," on which he labored for years in post-production. The day after her death, he wrote on Twitter: "An extraordinary editor makes possible something that would not have been possible without them. Karen Schmeer was an extraordinary editor."

"A movie doesn't have to have an ostensible subject matter,'' [Morris] says [of "Fast, Cheap..."]. "That said, there was premeditation and deliberation here. There was intent.''

Morris says, however, that the film comes "awfully close to pure montage,'' a string of suggestively juxtaposed images meant to evoke but never explicitly state a theme.

"The multiple [film and video] formats make you aware of imagery as imagery,'' he says, "but I can't imagine this film without the narration by the characters. The ideas come from the relation between what is being said and what is being seen. If there isn't a connection, it doesn't work -- and I can testify to this from empirical knowledge gathered in an editing room.'' [...]

"There was a point where I was very concerned with where the film was going,'' Schmeer remembers, "and I didn't want him to complete a movie that I didn't like. We were kind of inundated with visual material, but we were losing sight of the characters, which are really the core of his film.'' [...]

True to his democratic nature, when he heard Schmeer's critique of his work in progress, Morris listened. "I credit Karen to a large extent with saving this movie,'' he says, "with convincing me to make longer passages and not allow the visual style to overwhelm the movie.''

When the original editor, Shondra Merrill, left the project, Morris promoted assistant editor Schmeer to the position. "Fast, Cheap..." is, in my opinion, one of the greatest films ever made -- and manifestly one that has been extensively carved and shaped through editing. As Morris said, it's "awfully close to pure montage." All films, of course, are created in the editing -- or, as in the case of a "single-shot" feature like Alfred Hitchcock's "Rope" or Michael Snow's "Wavelength" or Aleksandr Sokurov's "Russian Ark," by conceiving mise-en-scene as an alternative to actual cutting between shots -- but "Fast, Cheap..." relies more than most movies on the interplay of images, music and narration in the viewer's head to create meaning. There's no plot, just four men, filmed individually, talking to the camera about their lives, their jobs, their passions: a lion trainer, a topiary gardener, a naked mole-rat specialist¹, and an M.I.T. robot scientist. I love these guys.

The movie leaves it up to you to determine how these fellows and their lives' work are connected; it comes together in your head while you watch it, even if you can't always quite articulate how. But the patterns are right there in front of you, in the images and words emanating from the screen. That's an extraordinary achievement. Watch the excerpts in the clip above to get an idea of how the movie works: 1) the opening montage (circus images, plants, naked mole rats, robots -- and then the strange segment from an old jungle adventure picture); followed by 2) the transitions between the first interviews with the topiary gardener, the naked mole-rat specialist, and the AI scientist, then back to the wild animal trainer. Notice how you're already beginning to piece things together. When the movie circles back around to the old "Darkest Africa" serial, its inclusion makes sense in ways we didn't understand when we first saw it before the credits sequence. (Look for the recurrence of "Africa.") But as you watch the pre-credits sequence, what is the theme? Something, perhaps, to do with animals, various forms of natural and artificial life -- and death, adaptation, survival... "the hidden city beyond the Mountains of Despair"?

Notice the string of surreal visual associations (Buñuelian -- as in "Un Chien Andalou") that take us from the robot scientist back to the lion trainer for the first time: b&w shot of crawling robot (seen in opening credits); b&w shot of man and boy from the old serial; shot of volcano erupting from serial; shot of man and boy continuing to walk from serial; b&w shot of people arriving in big circus tent, its pointed peak echoing the shape of the volcano; color shot of naked mole rats underground; color shot of elephants at the circus; color fast-motion tracking shot of topiary gardener, head on (you'll catch a glimpse of an elephant topiary animal in the background); color fast-motion tracking shot of a clown dressed like an animal (pig?) from behind; b&w shot of a clown carrying a traffic light across one of the circus rings -- whip pan to the animal/clowns from the previous shot now coming (full-circle) toward the camera; vintage b&w shot of lion trainer Clyde Beatty in action. (See frame grabs of this sequence here.)

At the heart of the picture are questions about how we create meaning and structure with our brains by organizing and categorizing. What do our taxonomies say about the ways in which we choose to view and experience the life around us? (By the way, did you know that naked mole-rats, though mammals, are neither rats nor moles?)

Morris's next film, "Mr. Death: The Rise and Fall of Fred A. Leuchter, Jr.," takes the viewer on another unlikely, unforeseeable journey. Going into the film blind (as you should!), you could never anticipate where the film is going to lead. What does the title mean? What is the eponymous figure's "rise and fall"? While "Mr. Death" has a more chronological narrative structure than "Fast, Cheap...," the genius of both films is in how they reveal their subjects.

"Karen and I were very close and we had many, many arguments over the years,'' Morris told the Boston Globe. "I am dedicating my new movie to Karen," he wrote on Twitter. "I only wish she could be around to see it." 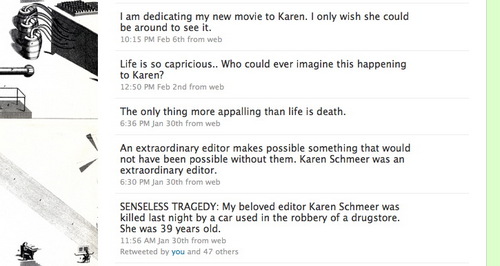 ¹ Please notice Ray's bow tie. He wore it for you -- and for himself. Some critics in 1997 thought Morris was "making fun" of him. These detractors don't know much about human beings, and reveal more about their own condescending attitudes than about the film. You will not be surprised to learn that Ray showed up for the Interrotron interview that day wearing his entomology tie on purpose, to show it off. That's what it's for. Ray is a science geek -- which is not a derogatory term. He has a sense of humor.

Photo of Karen Schmeer at top by Garret Savage for The Boston Globe.