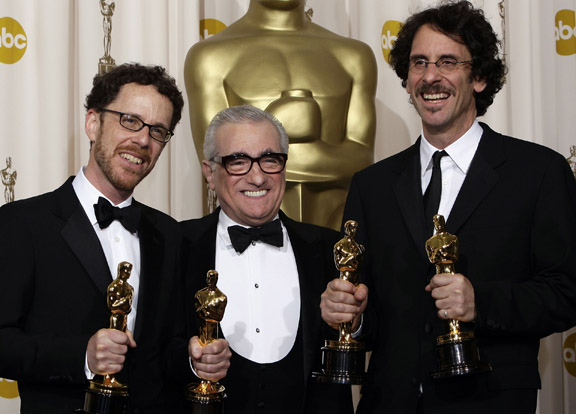 Everybody pretty much called it in advance, but nothing was certain until the very end. Joel and Ethan Coen's crowning achievement, "No Country for Old Men," toted some heavy Oscars Sunday night (for Picture, Director, Adapted Screenplay and Supporting Actor), but the Academy spread the wealth.

"We, uh... thank you very much," said Ethan, accepting the Best Screenplay Adaptation Oscar, and it was a terrific speech. Six words. Maybe five-and-a-half. Funny. Pithy. Whether it was intentional or the shorter Coen brother just went up on his lines, he demonstrated that screenwriting is not just about crafting dialog. If you set the scene properly, the words themselves don't have to be memorable, just the moment.

It was. And, because of the sense of drama created by the structure of the show, that scene felt like the tipping point for "No Country for Old Men." You didn't know where the evening's storyline was headed, but once it got there, as always, it felt as if it had been inevitable. Kind of like the ending of "No Country" itself....