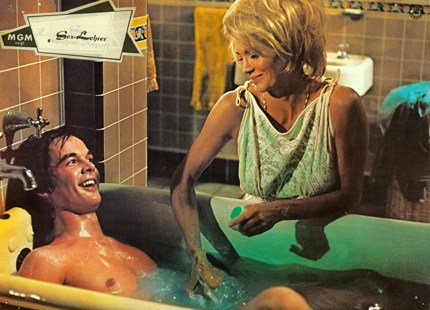 Angie polishes Ponce's pole in "Pretty Maids All in a Row." 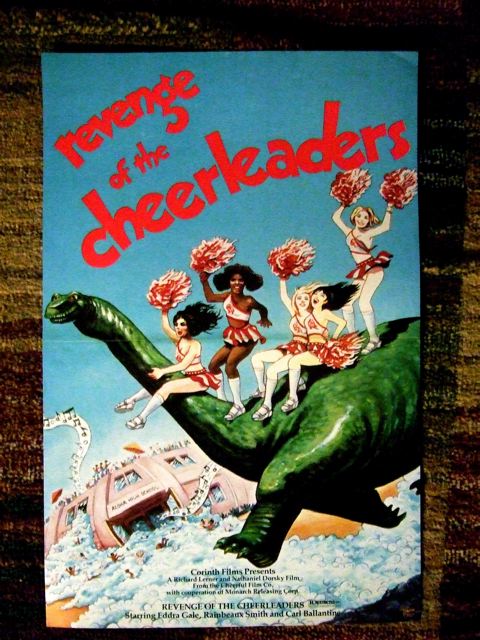 Dennis Cozzalio at Sergio Leone and the Infield Fly Rule reports on Quentin Tarantino's Grindhouse 2007 Festival at my former neighborhood rep house, the New Beverly Cinema (right by El Coyote!) in Los Angeles. Dennis includes an ebullient assessment of "Revenge of the Cheerleaders" (1976), a giddy teen sexploitation movie I have been very fond of since I showed in my college student film series. Writes Dennis:

There is no curriculum at the "morally compromised" Aloha High School, only figures of authority to disregard or blatantly undermine— these cheerleaders and the rest of the Aloha student body make Riff Randall and her crowd look like straight-A honor society members. The girls and boys only want to have fun, which translates into a heady brew of screwing, playing basketball, cheering, robbing students at a thug-happy rival high school of their drugs (during class!) and riding around in a cherry red 1955 Buick convertible with the top down, and their tops off, of course. (The nudity is democratic too—there’s more than a flash of full frontal male twiggery on view here, including Hasselhoff, though his Boner status, based on this evidence, is overinflated.)

It’s been a long time since I’ve encountered such a relentlessly likable feel-good-at-all-costs vibe in any movie, let alone one as low-rent as this one. Tarantino said in a recent interview, referring to discovering treasures in the world of exploitation movies, that not only do you have to drink a lot of milk to get to the cream, with exploitation fare you have to drink a lot of curdled milk to get to the milk. And that’s what "Revenge of the Cheerleaders" felt like to me Sunday night—the reward for having slogged through a lot of similar comedies that had the sex and nudity but none of the zip and tang and spirit this one has in buckets.

And there's so much more. Dennis also writes about Angie Dickinson and Rock Hudson in "Pretty Maids All in a Row," and other grist for the grindhouse...

Next Article: Ebertfest '07: "It's his happening and it freaks him out!" Previous Article: Chris Rock: Blacks more electable than retarded

Ebertfest '07: "It's his happening and it freaks him out!"