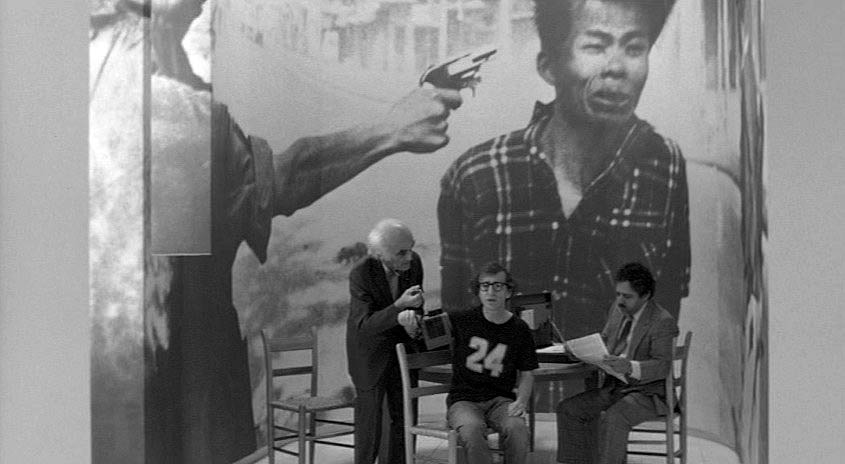 Regarding issues raised by Brian De Palma and "Redacted" (see below): Here are two frame grab from Woody Allen's 1980 feature "Stardust Memories," a United Artists release. The movie is a Felliniesque comedy (it starts right off as a parody of "8 1/2"), not a documentary. The blown-up image on the wall was taken a dozen years before "Stardust Memories" (February 1, 1968) during the Tet Offensive by Associated Press photographer Eddie Adams in Saigon. 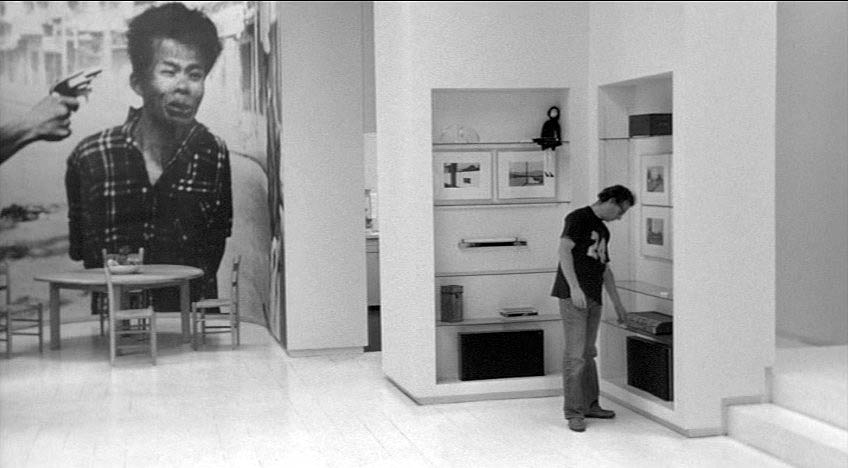 The man with the gun is South Vietnamese National Police Chief General Nguyễn Ngọc Loan. The man in the plaid shirt, who is or is about to be shot in the head (his death is shown in NBC News footage taken at the same time), is thought to be Nguyễn Văn Lém (or possibly Le Cong Na), and was either a Viet Cong officer or a political operative. His face was disfigured because he had been beaten. The title of the photo, which became instantly famous around the world, is "General Nguyen Ngoc Loan Executing a Viet Cong Prisoner in Saigon" and it won a Pulitzer Prize for Spot News Photography in 1969. It was widely reprinted and was used as a symbolic image by the anti-war movement.

The general killed the Viet Cong; I killed the general with my camera. Still photographs are the most powerful weapon in the world. People believe them, but photographs do lie, even without manipulation. They are only half-truths... What the photograph didn't say was, 'What would you do if you were the general at that time and place on that hot day, and you caught the so-called bad guy after he blew away one, two or three American soldiers?'

"Although a number of "galleries and artists" are acknowledged in the end credits of "Stardust Memories" for the use of photos and artworks in the film, the source for this picture is not cited. The film does contain a standard disclaimer, reading: "The story, all names, characters and incidents portrayed in this production are fictitious. No identification with actual persons is intended or should be inferred."

Images of the execution were also used in "Head" (1968), directed by Bob Rafelson, written by Rafelson and Jack Nicholson, and starring the Monkees, Victor Mature and Annette Funicello. Reviewing "Head," Nick Burton wrote: "Indeed, there is much newsreel footage here of the Vietnam war, and the frightening image of a man being shot point blank in the head, execution-style, reoccurs in this G-rated film enough to remind the audience just what was at stake when people's attentions were distracted by escapism."

Who, if anyone, owns the rights to the image known as "General Nguyen Ngoc Loan Executing a Viet Cong Prisoner in Saigon"? Who owns the rights to the execution footage attributed to "NBC News" (taken by a South Vietnamese cameraman Vo Suu, who worked with NBC correspondent Howard Tuckner? Would such images ever be shown on television or in mainstream print or Internet outlets today? Do (or did) either of the men who were photographed have any rights (moral or legal) over how their likenesses were used? Are the images legally considered to be in the public domain -- and, if so, when did that happen? The pictures were taken by credentialed, professional news photographers. Does that make a difference? The infamous private photographs taken by and of American military personnel abusing captives at Abu Ghraib prison in Iraq were released with the identities of the prisoners digitally obscured. Should the same standards be applied to other images -- say, of civilian or military casualties? Do those standards change at the official end of a war, or major combat operations?

An article in Famous Pictures Magazine reports: "After the picture and footage flashed across the world there were cries for Loan to be charged with War Crimes for his summary execution of Lem. Loan's execution would have violated the Geneva Conventions for captured soldiers or Prisoners of War (POWs) if Lem had been wearing a military uniform. Since Lem was caught wearing civilian clothes, plaid shirt and black shorts, Loan was only restricted by the laws of the South Vietnamese government, which allowed the use of such harsh measures." So, this may have been documentation of a war crime. How do such considerations affect the rights or responsibilities of those who reproduced the photograph? Do the rights associated with the images vary after the fact, depending on whether the usage is journalistic, commercial, non-profit, political, satirical, comedic, sensationalistic, or otherwise?

The Bush administration has tried to prevent the press from photographing even the coffins of unidentified US military casualties in Iraq and Afghanistan. Do government censorship efforts change our view of war images? Are the legal or ethical standards for showing victims of accidents or natural disasters different from those for showing casualties of war? How? Given that "Head" was released the same year the execution occurred and "Stardust Memories" twelve years later, does the passage of time change how journalistic images are used in fictional contexts? Would you rather not think about this? I don't have definitive answers to these questions. Do you?

NOTE: Errol Morris writes a New York Times blog called Zoom: A Fillmmaker Uncovers the Hidden Truths of Photos in which he examines photographs and the stories behind them for evidence about what we think we see in them and what we think we know about them.