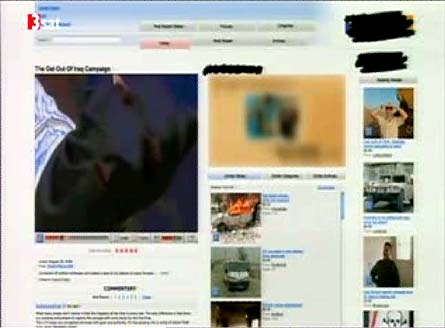 Because of the whole "Hitchcockian thriller" rep that's stuck to Brian De Palma for so many years and so many movies ("Sisters," "Obsession," "Carrie," "Dressed to Kill," "Blow Out," "Raising Cain," "Mission: Impossible," "Femme Fatale," "The Black Dahlia") some people seem to forget that De Palma is (was?) first and foremost a political filmmaker. Because his "Redacted," a fictionalized film that uses a variety of documentary techniques from amateur combat videos to "Al Jazeera" to YouTube," concerns war crimes committed by American soldiers in Iraq, the connection to his Vietnam movie "Casualties of War" seems obvious.

But the stronger connection, I think, is to "Greetings" (1968) and "Hi Mom!" (1970), two then-counter-cultural comedies, more influenced by Godard than Hitchcock, that toyed with our perceptions of Vietnam, terrorism, law and order, Black Power and other issues of the day as they were filtered through the mass media. De Palma provocatively mixed satire, "documentary," pornography, voyeurism, journalism, improvisation and Godardian alienation strategies into volatile, combustible Molotov-cocktail-movies.

I don't know when De Palma has ever been accused of being sincere, but "Redacted" feels to me as close as he's ever come. He's engaged in a way he did not seem to be with "The Black Dahlia" (though I realize that's not saying much) and sections of the film are shocking and incendiary. De Palma won the best director award at the Venice Film Festival, and I think he really set out to give the audience a better, more visceral understanding of what has been going on in Iraq for years now -- not by painting the Americans as "villains," but by showing what happens when raw recruits are thrown into guerilla warfare. Very much like in that other undeclared war that we're told we're not supposed to compare the current one to. And, as the title suggests, this effort is designed to get past the heavily censored narratives and images we have gotten from our government officials and embedded reporters (WMD, Jessica Lynch, looting, Pat Tillman...), to tell some of the stories that the mainstream press is still too cowed to report.

But chief among my problems with "Redacted" is that, if you've seen "Greetings" and "Hi Mom!" (and you absolutely should -- they're both on DVD), and you know that De Palma has now made an Iraq movie, that pretty much tells you everything you need to know. The night raid scene in "Redacted" is the "Be Black, Baby" National Intellectual Television documentary in "Hi Mom!" But what seemed radical and revolutionary and experimental in the late 1960s and early 1970s is now fairly commonplace. Adding visual references to Arab satellite networks and Islamist web sites and video conferencing doesn't have the same immediate impact. We've all seen this sort of thing in other movies and on network TV.

In fact, if you've watched the actual documentaries about Iraq on "Frontline" ("News War," "The Soldier's Heart," "The Lost Year in Iraq," "A Company of Soldiers," "Beyond Baghdad," "The Insurgency") and "Bill Moyers' Journal" ("Buying the War") and "60 Minutes" ("The Killings in Haditha"), "Redacted" looks like pretty tame and routine stuff, despite its inflammatory subject. (Do check out those links in the previous sentence, if you haven't seen them already.)

And while I think the movie is pretty fair about making points on all sides (it's a good sign that His Ignorance B--- O'------ started attacking the movie as "anti-troop" before he or virtually anyone had even seen it), I think it fatally wrongheaded in its handling some of the boots-on-the-ground characters. It's self-consciously a take on the platoon movie, with Kubrick references from "Paths of Glory" to "Barry Lyndon" to "Full Metal Jacket" on prominent display. We have the requisite platoon types, of course: the book-reading, glasses-wearing intellectual/moralist; the "journalist" who's out to collect war stories (only here he's an aspiring, untalented filmmaker who uses every cheesy transitional device in iMovie and doesn't stand a chance of getting into film school); the fence-sitter who's so morally shellshocked that he can't make sound decisions between right and wrong; the idiot follower; and the psychopathic killer the idiot follows. Although a French documentary takes pains to show the stress the troops are under, and how these men must make split-second decisions about life and death at any moment (see "Frontline"'s "The Soldier's Heart" for some real un(der)reported stories), the American Psycho and his fat toady are just flat-out cartoon-evil in ways that don't illuminate anything and, what's worse, simply hand ammo to the enemy (e.g., B--- O'------, A-- C------, and other propagandists and demagogues who unfailingly value ideology uber alles).

Where are the many, many good, decent soldiers (and Marines) who signed up after 9/11 and then, because they were thrown into this situation without adequate preparations or resources, found themselves ill-equipped to deal with blowback beyond anything their leaders had led them to expect? We know they're out there (over there and back here, if they were lucky), and any one of their stories is much more inherently dramatic and tragic and morally challenging than simply pitting "decent" American fighters against "evil" ones. I'm sure both kinds exist, but this is exactly the kind of senseless black-and-white false dilemma that got us into the Iraq-mire to begin with. There's a scene in which the two "bad apples" (did Donald Rumsfeld tape this bit?) shoot their own badass video that is so callous and crazy and pointless that I began to wonder if De Palma had consciously decided to include it in order to feed inflammatory material to the Fox News agit-prop machine. That ought to help promote the movie....