Bardem, Ledger and the truth about movie acting 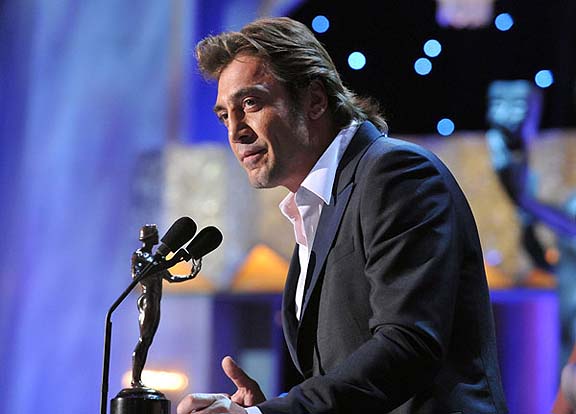 Javier Bardem in an eloquent moment at the SAG Awards. (SAG photo)

"I want to share this with my very good friend, Josh Brolin and Tommy Lee, and Kelly Macdonald, and with a great cast of “No Country For Old Men.” And to dedicate it to the Coen Brothers who ultimately are responsible for all of this. Thank you guys for hiring me, and thank you for taking the hard work of choosing the good takes, instead of the ones that I was really – I mean, where I really sucked."

Advertisement
Bravo to Bardem for publicly acknowledging what every cinematic actor knows but few talk about publicly. If you've ever asked yourself, "How can Actor X be so good in one picture and so bad in another?" -- Bardem's got your answer in a nutshell: Any performance is created from many random bits and pieces of film, carefully chosen (we hope!) and assembled from among hundreds of choices and many thousands of possible combinations. Actors may give several very different readings of the same scene, adjusting nuances and emotions or improvising something spontaneous that the director and the editor (n the Coens' case, the pseudonymous Roderick Jaynes -- can't wait to hear his Oscar speech) must put together from what would otherwise be incoherent scraps. 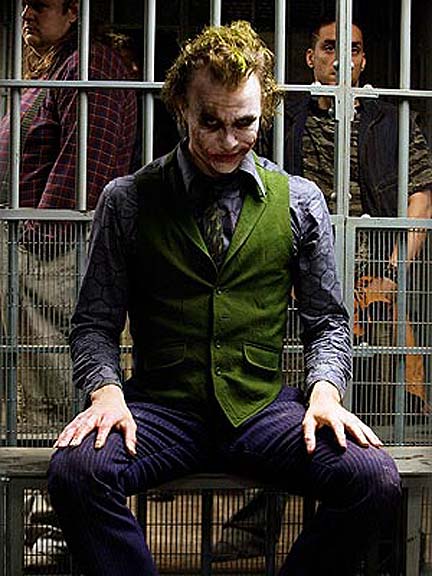 Heath Ledger as the Joker in Christopher Nolan's "The Dark Knight."

Any time an actor looks good, it's in large part because the director and editor have made wise decisions about what to use and how to use it. Likewise, if the actor looks bad, it's probably as much the fault of the director and editor as it is the performer. It could be that what you're seeing is exactly the performance the director wanted to elicit from the actor -- even if you don't like it. Then again, the director may have failed to capture the footage needed for a cohesive performance during production -- either because he/she didn't realize everything needed was not yet "in the can," or because of some kind failure of communication, or because, for whatever reason, the actor and director didn't see eye to eye on what the performance should be. The full performance is recorded, somewhere, when an actor leaves the set. After that (with the exception of tweaks that can be made in looping) it's up to the director and the editor to choose and assemble the right takes, and to augment the performance with music, sound and visual effects. The actor can be made to look ridiculous -- or much better than anticipated -- at any point.

Director Christopher Nolan ("Memento," "Batman Begins") recently directed the late Heath Ledger as The Joker in the Batman sequel "The Dark Knight." In a touching reminiscence for Newsweek, he explains the process from the other side:

When you get into the edit suite after shooting a movie, you feel a responsibility to an actor who has trusted you, and Heath gave us everything. As we started my cut, I would wonder about each take we chose, each trim we made. I would visualize the screening where we'd have to show him the finished film—sitting three or four rows behind him, watching the movements of his head for clues to what he was thinking about what we'd done with all that he'd given us. Now that screening will never be real. I see him every day in my edit suite. I study his face, his voice. And I miss him terribly.