Turner Classic Movies is saluting the June 30 birthday of director Anthony Mann with day of his films -- including 1949's "The Black Book" (aka "Reign of Terror") an Austro-Hungarian Expressionist film noir take on the French Revolution, photographed by one of Mann's frequent early collaborators (and one of the noirest of black-and-white cinematographers), John Alton. At Straight Shooting (bookmark it), Richard T. Jameson surveys the career of a filmmaker who

acquired a passionate cult among connoisseurs of film style for having made some of the most lucidly and powerfully visualized films in American cinema. Few filmmakers have equaled his genius for fusing landscape and dramatic action, and his heroes--in the films noir of the late Forties and his majestic Westerns of the Fifties--are a compellingly conflicted lot. [...]

Was Anthony Mann a director of the first rank? Not when the touchstones are Lang, Ford, and Hawks.... But his best work goes a long way toward making film noir and the Western our two richest genres, and his relentless pursuit of dynamic images ensures him the esteem of anyone who believes that movies should be worth looking at, minute by minute, frame by frame. 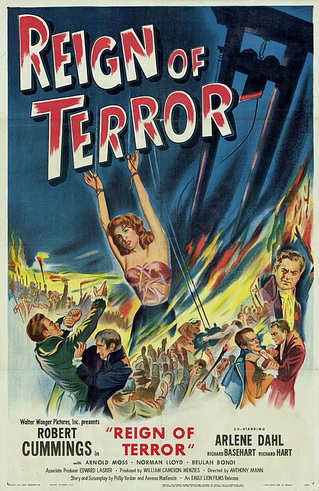 Mann brought the noir aesthetics of "T-Men," "Raw Deal" and "Side Street" to a western ("Devil's Doorway"), a tough drama about undercover INF agents in Mexico ("Border Incident"), an alt-historical suspense film about the attempted assassination of president-elect Abraham Lincoln aboard a locomotive ("The Tall Target"), and even a Korean War platoon picture ("Men in War" -- the sound of which will be instantly recognizable to fans of Pico and Alvarado on Firesign Theatre's "Don't Crush That Dwarf, Hand Me the Pliers"). But RTJ gives his highest recommendation to "The Black Book":

This black-comedy treatment of the French Revolution as gangster film is like a nonstop devil-wind of shrapnel, its paranoid compositions and camerawork so charged it has to explode. The American cinema's premier production designer William Cameron Menzies is credited as producer but not as art director; yet surely his contribution was huge, working miracles to create an atmospheric period piece on little more than B resources. Philip Yordan co-wrote the script--and one pitch-dark scene between Robert Cummings and Arlene Dahl strikingly foreshadows the reunion reverie of Joan Crawford and Sterling Hayden four years hence in the Yordan-written, Nicholas Ray-directed "Johnny Guitar." Still, I cherish more Richard Basehart as the phlegmatic Robespierre dismissing crony and arch-conspirator Arnold Moss: "Fouché, why don't you take a walk?" 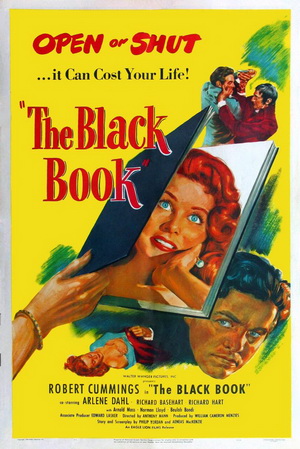