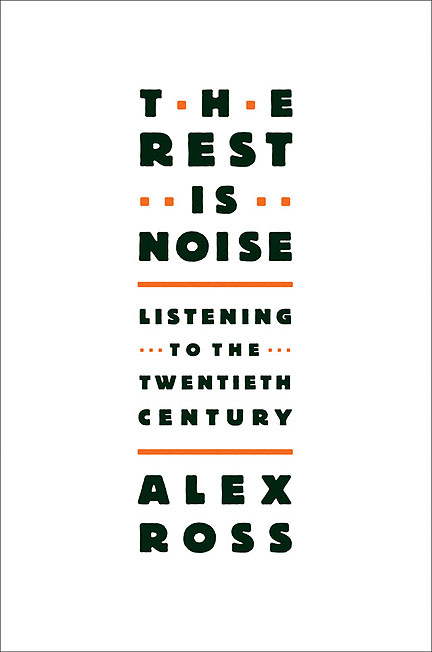 "I am not interested in writing about music as a horse race with Beethoven or Charlie Parker out in front." -- Alex Ross, December 2004

I've just finished reading New Yorker music critic's Alex Ross's mind-bogglingly ambitious critical history of modern "classical" music, "The Rest is Noise: Listening to the Twentieth Century." It's 1) a biting, passionate, ironical survey of political, religious and aesthetic fashions and dogmas (from Richard Strauss to Stalin to Boulez); 2) a serial biography, and 3) an illuminating analysis of individual compositions and musical influences. And I'm absolutely dazzled by it. With incisive humor, Ross chronicles various circular debates (historical, personal, nationalistic, musical) concerning whether, at one time or another, a particular work or a composer or a clique was, let's see, too elitist, too commercial, too bourgeois, too fussy, too fascist, too socialist, too florid, too ascetic, too anal, too free, too beholden to state or other interests, too abstruse, too grandiose, too formal, too casual, too programmatic, too old-fashioned, too melodic, too atonal, etc., etc., etc.

And this was just over last century, when, say, Stravinsky and Shostakovich were hailed and condemned as all of the above -- respectively, sequentially, cyclically, and/or simultaneously.

I came across some inspiring remarks Ross made at a 2004 symposium called "Shifting Ears: A Symposium on the Present State and Future of Classical Music Criticism" (see John Fleming's article in the St. Petersburg Times here). People tend to think of modern classical music as a rarified, elitist realm and movies as a popular industry/art form. But the perceptions are relative: There are big marquee names, big studios (labels, distributors), and major league international venues/festivals in classical music just as there are in movies. And there are academic, niche, or "experimental" circles in both worlds. Ross and John Davidson of Newsday proposed some ways of approaching music that, I think, work just as well for movies. Among Ross's estimable propositions:

# "We're all fighters in a strange guerrilla war in which the object is not to defeat an enemy but to win a place at the table. This doesn't mean you give up objectivity and become a PR agent for the business. It means, instead, that you write with more urgency, more immediacy. The writing itself becomes crucial. Language is our secret weapon."

# "Classical music has an actual audience and a potential audience. I try to write with both fanatical and unconverted readers in mind. The trick is in finding a language that intrigues both."

# "Nothing is more off-putting than the critic who puts down one kind of music in order to praise another. There is no need to mention Britney Spears until such time as Ms. Spears writes her first piano quintet." [This reminds me of Robert Altman's late-life conviction that he and the studios who once hired him were no longer in the same business, and that neither was interested in making the kinds of movies the other was interested in.]

# "If the big orchestra is playing the same repertory ad nauseam, I don't have to complain ad nauseam. Instead, I can seek out youth orchestras, new-music ensembles, chamber groups playing in inner-city schools. Critics can take the lead..."

# "There is nothing shameful in unchecked enthusiasm. If I walk out dancing on air, I say it in the review, even if my colleagues smirk."

"The Rest is Noise," without necessarily intending to do anything so specific, also provides a welcome perspective on year-end critical/historical summaries, polls, and the illusions of meaning we sometimes try to impose upon them, without much real evidence beyond our own hunches. (That -- and not commonplace snarkiness (!) -- is what I was attempting to convey with my loopy, switchback sentences in the post below, about the results of the Village Voice/LA Weekly Film Poll. What direct cause-effect meanings can be teased out of any snapshot consensus, whether it's a popular election or a secret ballot by committee?)

Ross has posted a paragraph from Marcel Proust on his blog ("The man who saw everything") that I'm tempted to quote in full because it's so hilarious in this regard. Instead, I'll just quote most of it. Ross introduces it as a comment "on the politics of style in twentieth-century music [and] the limits of a teleological interpretation of music history" -- but, you know, it could just as well be about movies:

Because [Mme de Cambremer] considered herself "advanced," because (in matters of art only) "one could never be far enough to the Left," she maintained not merely that music progressed, but that it progressed along a single straight line, and that Debussy was in a sense a super-Wagner, slightly more advanced again than Wagner. She did not realize that if Debussy was not as independent of Wagner as she herself was to suppose in a few years' time, because an artist will after all make use of the weapons he has captured to free himself finally from one whom he has momentarily defeated, he nevertheless sought, when people were beginning to feel surfeited with works that were too complete, in which everything was expressed, to satisfy an opposite need. There were theories, of course, to bolster this reaction temporarily, like those theories which, in politics, come to the support of the laws against the religious orders, or of wars in the East (unnatural teaching, the Yellow Peril, etc., etc.). People said that an age of speed required rapidity in art, precisely as they might have said that the next war could not last longer than a fortnight, or that the coming of railways would kill the little places beloved of the coaches, which the motor-car was none the less to restore to favor.... In any case, the day was to come when, for a time, Debussy would be pronounced as flimsy as Massenet, and the agitations of Mélisande degraded to the level of Manon's. For theories and schools, like microbes and corpuscles, devour one another and by their strife ensure the continuity of life. But that time was still to come.

For good measure, I'll throw in this paragraph (quoted by Ross on page 408 of "The Rest is Noise") from a 1958 article by Milton Babbitt in High Fidelity magazine ("Who Cares If You Listen?" -- originally titled "The Composer as Specialist"), about the relationship between the Creator and the Audience. We're always hearing complaints about how audiences don't turn out for certain cultural events that would have made them better if they had attended, or how they ruin things by consuming them and thus making them popular, or how they don't like the things they ought to like when they should like it, or how they're just not exposed to the stuff they really would (perhaps learn to) like if only they had the opportunities and the willpower. Babbitt put it this way:

I dare suggest that the composer would do himself and his music an immediate and eventual service by total, resolute and voluntary withdrawal from this public world to one of private performance and electronic media, with its very real possibility of complete elimination of the public and social aspects of musical composition. By so doing, the separation between the domains would be defined beyond any possibility of confusion of categories, and the composer would be free to pursue a private life of professional achievement, as opposed to a public life of unprofessional compromise and exhibitionism.

Next Article: Inverting a Zodiac code Previous Article: Consensus and the Big Film Poll Blowout of 2007

Consensus and the Big Film Poll Blowout of 2007