I saw three new movies on Monday. Each one could have been the best film of the day. I can't choose among them, so alphabetically: Werner Herzog's "Bad Lieutenant: Port of Call, New Orleans," Atom Egoyan's "Chloe" and Rodrigo Garcia's "Mother and Child." A story involving a cop uncontrollably strung out on drugs. A story involving a wife who meets a hooker. A story about three woman whose lives are shaped by the realities of adoption. Three considerable filmmakers. Three different tones. Three stories that improvise on genres instead of following them. Three titles that made me wonder, why can't every day be like this?

Nicolas Cage and Werner Herzog were surely destined to work together. Radical talents are drawn to one another. Cage tends to exceed the limitations of a role, Herzog tends to exceed the limitations of film itself. Knowing nothing about conditions during the shoot, my guess is they found artistic harmony. If not, they ended up hardly on speaking terms. Either way would have worked.

"Bad Lieutenant: Port of Call, New Orleans" has essentially nothing in common with Abel Ferrara's great 1992 film except for a title. Comparisons are pointless. The performances of Harvey Keitel and Nicolas Cage are both so extreme they're originals. Cage plays a New Orleans cop who at the outset of the film toys with the fears of a convict locked in a cell who believe he will drown beneath the rising flood waters of Hurricane Katrina. He toys, the bastard, but he doesn't let him drown, and ends by injuring his own back. 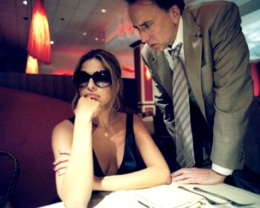 His doctor puts him on Vicodin for pain that may last for the rest of his life. The problem is, if you are on Vicodin for the rest of your life, you are going to need more and more Vicodin and the rest of your life may turn out to take less time than you expect. Cage moves into a mode where he consumes any drugs he can get his hands on--painkillers, cocaine, heroin, you name it. These he obtains any way he can, including theft, confiscation, and raiding the police evidence room. He becomes more and more reckless and desperate. All this connects with a gruesome homicide he's investigating, and some very dangerous people.

Another director would have approached this as a genre picture. Herzog envelops the genre and transcends it. His fascination involves the far shores of the human personality. Nicolas Cage is as good as anyone since Klaus Kinski at portraying a man whose head is exploding. It's a hypnotic performance, underlined by the gritty cinematography of frequent Herzog collaborator Peter Zeitlinger.

In a film with many extraordinary shots, there is one that will inspire much discussion. The bad lieutenant is in a room with two iguanas on a table--never mind why. Another director might have used them as a colorful background detail. Herzog finds them irresistable. He frames them in the foreground for what seems an inordinate amount of time, with Cage in the background, sometimes looking at them ominously out of the corner of his eye. We realize, My god! The iguana, to the extent that any iguana can, has Nicolas Cage's eyes!

Atom Egoyan's "Chloe," one of his best and certainly most commercial films, begins as a hypnotic story of suspicion and jealousy, and continues through passion and eroticism to an unexpected but logical conclusion. It becomes a battle of wills between the middle-aged wife (Julianne Moore) of a famous professor, and a 20-year-old prostitute (Amanda Seyfried). The professor (Liam Neeson) has a habit of flirting with women that his wife finds troubling, and when he says he missed a flight home on his birthday she doesn't believe him.

She has reason to know that a young blonde women (Seyfried) is a prostitute, and knows how to locate her. She thinks she's her husband's type. She pays her to "meet" her husband and report on how he behaves toward her. I've seen a similar device in other movies, but Egoyan treats it in an entirely different way. The two women find themselves drawn into a web of secrets and confidences, and Egoyan, as so frequently, is a master of sexual obsession and the ways of seduction.

We expect Moore to be a consummate and fearless actress, and so she is. The surprise is Amanda Seyfried. This is not the kind of role she's been playing: Bold, sensuous, intelligent. In this same Toronto festival, in "Jennifer's Body," she plays the victim and foe of a teenage demon (Megan Fox). She does a good job, but with "Chloe" you fully realize that here is an actress worthy of serious consideration.

I don't want to diminish your pleasure in watching this film, so I think I should immediately end any plot description. That means I can't fairly discuss the aspect of the film that interests me the most. I'll have to wait and see how other critics approach it, and then, if I must be a spoiler, I won't be the first one. "Chloe" has many elements in parallel with a famous film classic, but if I even mentioned its title, that would be going too far. Let me just close my saying that few directors bring more focus and intensity to eroticism than Egoyan.

Rodrigo Garcia's "Mother and Child" involves the stories of three women, and centers around pregnancy. Viewed simply as a plot, this could have been the material of sop opera. Garcia however creates characters so particular and quirky that we're really more interested in them than in what happens to them.

Samuel L. Jackson and Naomi Watts in "Mother and Child"

Two of them, played by Annette Bening and Naomi Watts, deliberately choose to be all but unknowable. Bening actually gets some half-incredulous laughs by how rude and peremptory her character is. She's one of those people there's no talking to, because she knows what you should have said and you didn't. Jimmy Smits plays a co-worker who is nice to her, simply nice, and you'd think he'd started World War Three. God help him if he brings her tomatoes from his garden. This isn't precisely a comedy, but Bening's comic timing is precise--not that her character thinks she's being funny.

Watts plays a talented, self-confident lawyer in her 30s who has no one--literally no one--in her life. She doesn't want anybody, either. She's hired by a high-powered LA law firm, and seduces her boss (Samuel L. Jackson), but this means nothing to her. He's a good man and doesn't comprehend her. She gets pregnant, not necessarily by him, and this is a surprise because she thought she couldn't have children.

Kerry Washington, the third woman, applies to an adoption agency with her husband. They are mercilessly interviewed by the future mother of the baby they intend to adopt (Shareeka Epps as a small but formidably self-confident college senior). The Bening character has a hopeless relationship with her mother and the Watts character never knew her mother, but Washington's character has a mother played by S. Epatha Merkerson who knows all about being a mother and having babies and has a scene with her daughter that had the audience roaring and applauding. The scene ends on a close-up of Washington that makes her look like a 12-year-old who deserved a scolding.

All three of these films achieved the one thing that's valuable above all else: They required close attention, and deserved it. They were marriages of direction, writing and acting, all in harmony, all on the same page, all leading to a suspicion that's been building all during this festival, that 2009 may turn out to be a pretty good year at the movies after all.

A scene from "Chloe"

A taste of Atom Egoyan's "Exotica" -- reviewed here in my Great Movies Collection.