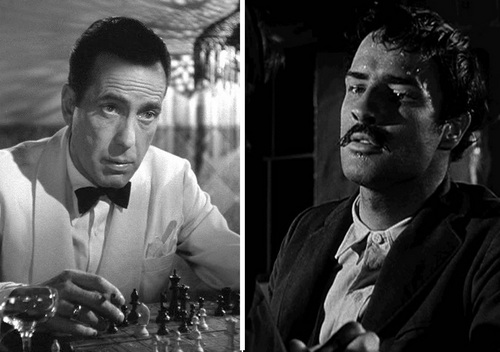 Everybody is making lists of the questions the candidates should be asked during the debates. My question would be: What's your favorite movie? As my faithful readers all know, the answer to that question says a lot about the person answering. It could be used as a screening device on a blind date. Among other things, it tells you whether the person has actually seen a lot of movies, and I persist in believing that cinematic taste is as important as taste in literature, music, art, or other things requiring taste (including food and politics). I know the answers of the most recent Presidents: "High Noon" (Clinton) and "Field of Dreams" (Bush). What might this year's candidates say? A Google search suggests their answers, (alphabetically):

Barack Obama on Facebook: "Casablanca," "The Godfather I and II," "Lawrence of Arabia" and "One Flew Over the Cuckoo's Nest."

Sarah Palin on Facebook: Didn't reply on Facebook. Google search yields only her official website, where "favorite movie" is ominously listed under "Trivia," and even more ominously is left blank. Movies are not trivia.

But just asking for a "favorite" movie can be limiting. I found this exchange between Entertainment Weekly and McCain:

Q. We read somewhere that Viva Zapata! is your favorite movie of all time?

A. Elia Kazan made three movies with Marlon Brando. One was "A Streetcar Named Desire," one was "On the Waterfront," and the third was "Viva Zapata!" Many people think Brando's performances in "Streetcar" and "Waterfront" were his best. I think Zapata! was his best. I'm in the minority about this. But go back and watch the scene of his wedding night, with [Brando] and Jean Peters - the actress who later married Howard Hughes, who made her give up acting - when she teaches him to read by taking out the Bible and reading it with him. That's a poignant scene."

Now what do we learn from these answers? First of all, we are impressed that McCain names three great Kazan-Brando movies. He even knows which title he's in the minority on. How many people know who Kazan was? Conclusion: He knows his movies. As for Obama, his reply is reasonable, and it shows him carefully mentioning "Godfather" Parts I and II, which indicates he knows there was a Part III. Conclusion: He knows what he's talking about. It's clear that Palin and Biden will sadly not be debating movies when they meet. As for Bill Clinton, when I asked him in 1999 to talk movies, he demonstrated surprising movie knowledge (see the transcript of our conversation on my website). Never got the chance to talk with George Bush.

The winning movie person is Clinton. In this race, he gets the gold medal. McCain silver. Obama bronze. If Palin and Biden were in the movie Olympics, the official scorecard would show: Did Not Compete. I didn't include Dick Cheney and Al Gore, because Gore narrated an Oscar-winning film, which trumps Cheney, I think.

What do we learn about the choices of "Viva Zapata" and "Casablanca?" Both are about, uh, mavericks. Zapata was a Mexican revolutionary, leader of the Liberation Army of the South. Sort of Mexico's Fidel Castro. Rick Blaine was a romantic exile and macho hero who gives away his ticket to freedom to save an anti-Nazi partisan, and the woman they both love. Does either choice say anything about the candidates? You tell me.

What I do know is that I am disappointed that both Biden and Palin were non-starters. So what? you ask. After all, didn't Obama and McCain have their campaign staffs fill in their Face Book profiles? Not a chance. Something as important as choosing your favorite movie, you don't delegate that to underlings.

For me, the important thing is that they both attend movies and care about them. As I've written many times, the movies are an empathy machine, drawing us into other lives, allowing us to identify with those of other races, genders, occupations, religions, income levels or times in history. Good films enlarge us, and are a civilizing medium. Bad films narrow us. No films at all impoverishes us. There is a splendid projection room in the White House. I hope the next president uses it a lot.