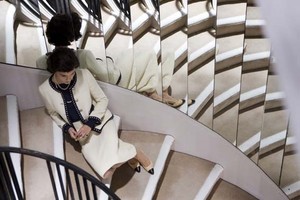 Look at it this way. We have the chance to see virtually every American film that's released, and many of the English language films in general. But with the crisis in U.S. distribution, the only foreign-language films are those someone paid hard cash for, and risked opening here. "You always like those foreign films," I'm told, often by someone making it sound like a failing. Not always, but often. They tend to involve characters of intelligence and complexity. If they're about people of subnormal intelligence, they're about that, or acknowledge it. In most of the world, people want to hurry into adulthood, not clinging to adolescence.

Have you noticed how many American mainstream films are about stupid people who are presented as normal? One opened recently: "Did You Hear About the Morgans?" No one in that film has an interesting thought as they stumble from one plot point to the next. I prefer characters who are articulate. Foreign films tend to be about people like that. Many American films are, too; in release now, for example, "Up in the Air," "A Single Man," "Crazy Heart," "Me and Orson Welles," "Mammoth," "Invictus."

My list of the year's best foreign films contains 15 titles. Why? Because that's how many I put on the list. Five others were on my earlier lists. Altogether now, adding my lists of documentaries and animated films, I have 50 "best films." Does that mean I'm getting soft? No, it means I reviewed 284 films in 2009, and these 17% were the best. Why do people insist that critics stick to a magic number? Manohla Dargis listed her top 10 films. Including ties, her list came to 19 movies. That's the spirit.

These were very good: 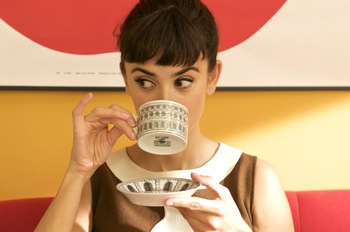 "Broken Embraces." Pedro Almodovar's "Broken Embraces" is a voluptuary of a film, drunk on primary colors, caressing Penelope Cruz, using the devices of a Hitchcock to distract us with surfaces while the sinister uncoils beneath. Involves a blind man who lost his great love in a car crash and years later learns the truth of her death, and how another man destroyed his last film. Penelope Cruz, Almodovar's constant Muse for over a decade, plays a prostitute who was with the blind man's producer when she fell in love with him-true love, and doomed. Dripping with primary colors, especially red, this is the year's most sumptuous film.

"The Class" is about the power struggle between a teacher who wants to do good, and students who disagree about what "good" is. In a lower-income melting pot neighborhood in Paris, a school year begins with high hopes. The students' intelligence may be one of their problems: They can see clearly that the purpose of the class is to make them model citizens in a society that has little use for them. The director, Laurent Cantet, worked for a year with François Bégaudeau, as the teacher, and the young actors who play students to achieve an uncanny spontaneity and realism. Winner of the Palme d'Or at Cannes 2008. 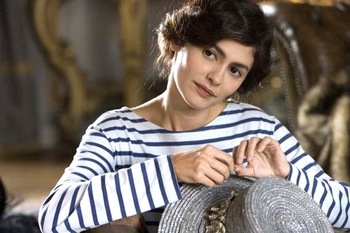 "Coco Before Chanel" begins with an abandoned orphan girl (Audrey Tautou), watches her grow into a music hall chanteuse, and then sidestep prostitution by becoming a mistress. From behind the clouds of her cigarettes she regards the world with realism and stubborn ambition. She becomes the most influential fashion icon of the 20th century. An unsentimental approach to Chanel's life. Less of a biopic, more of a drama. It's not about rags to riches but about survival of the fittest. Coco likes a rich playboy, but signed aboard for money, status and entre, not merely romance. She isn't a brazen temptress but a capitalist, who collects on her investment. Directed by Anne Fontaine. 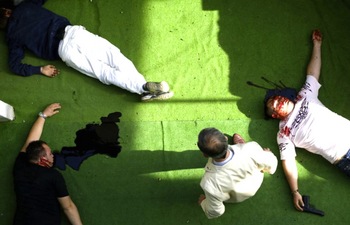 "Gomorrah." Remorseless drama about the foot soldiers of the Camorra, the crime syndicate based in Naples which is larger than the Mafia but less known. The recruits know De Palma's "Scarface" by heart. Living a life surrounded by drugs and women is a bargain they're willing to make even if it means death. It almost always does. An implacable algebra tightens the noose on day laborers, who kill each other for peanuts while invisible millionaires grow richer. Grimy and pitiless; the grand prize winner at Cannes 2008. Directed by Matteo Garrone. 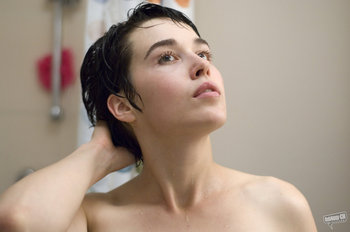 "Lorna's Silence." The story by the Dardenne brothers, among the best living filmmakers, involves a young woman from Albania, now resident in Belgium thanks to a marriage-for-sale deal with a pathetic drug addict. The vermin who has arranged the marriage now plans to kill the addict to benefit a Russian will pay her to marry him so he can obtain a passport she will be free to marry her lover. Sounds like it may be about plot, but it's about personalities, as intensely-observed as always with the Dardennes. In a way, everyone knows what has to happen. 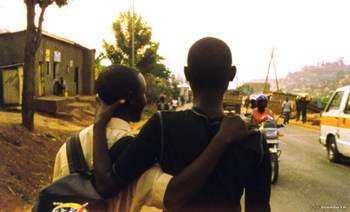 "Munyurangabo" considers the genocide in Rwanda through the lives of two teenagers. They aren't symbols, simply boys who have been surviving on their own in a big city, but are not toughened, and essentially good. They embark on a cross-country journey for purposes that eventually become sadly clear. Directed by Lee Isaac Chung, 30, a first generation Korean-American who grew up in a small farm in rural Arkansas. it was shot on location in Rwanda in two weeks, involved only local actors, and is in every frame a beautiful and powerful film--a masterpiece. Invited to Ebertfest 2010. 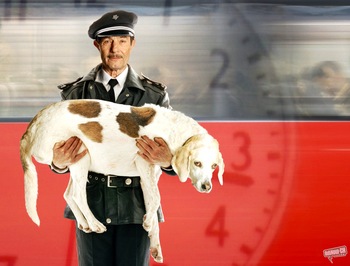 "O'Horten."  Bittersweet deadpan whimsy about a retiring Norwegian railroad engineer named Odd Horten. He sets his life by the railroad timetable and is baffled by retirement. Left on his own, he finds himself being driven by a blind man, sitting through a farewell party thrown by his fellow engineers (who sing him the choo-choo-choo woo-woo-woo song), and climbing a scaffold into the wrong apartment. Like Monsieur Hulot, he can always count on the consolation of his pipe. Directed by Bent Hamer. 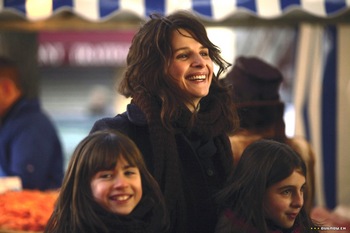 "Paris"  is about a group of Parisians. Their lives are not interlocking but parallel. Cedric Klapisch, the writer-director, creates a symphonic tribute to the city he loves, with each character a movement. A dying dancer, his sister (Juliette Binoche), a historian of the city with a creepy romantic obsession, an architect, a street vendor, a prejudiced bakery owner. At the end, one of the characters happens to glimpse some of the others through taxi window: anonymous Parisians, getting on with their lives. 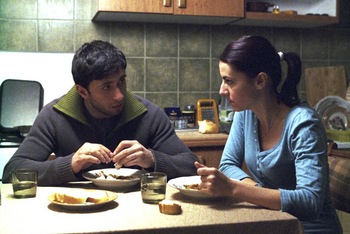 "Police, Adjective." A young Romanian cop is assigned to tail a suspected 16-year-old pot smoker. The kid is guilty, but the cop, having just witnessed the freedom in Prague on his honeymoon, doesn't want to arrest him and ruin his life with eight to 15 years in prison. This leads, not to the routine action ending of many American pictures, but to a curiously suspenseful argument with his captain over the dictionary definitions of the words "conscience" and "justice." A good example of the emerging Romanian cinema. Won both the Un Certain Regard jury prize and the Critics' Prize at Cannes 2009. 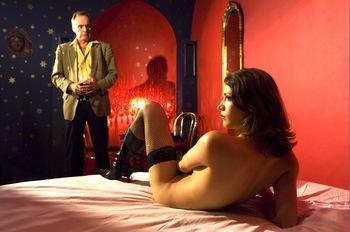 "Revanche." Tamara is a prostitute from the Ukraine, Alex is an ex-con who works as a bouncer in her Vienna brothel. They're having a secret affair, and lack the nerve to challenge the reprehensible pimp who rules their world. Alex plots an "easy" bank robbery, and brings her along in the getaway car. It goes wrong. He hides on the farm of his proud old grandfather, who lives alone, mourns his wife, feeds his friends the cows. Alex meets Susanne, a friendly neighbor's wife, and loneliness confronts with tragic coincidence. A 2009 Oscar nominee. 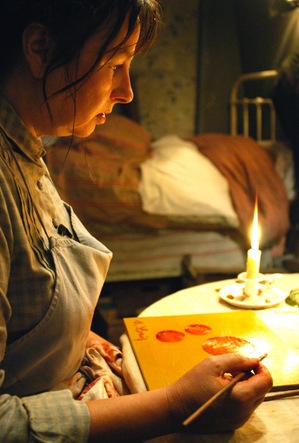 "Séraphine" is built upon one of the year's most acclaimed performances, by Yolande Moreau. She is a bulky, work-worn house cleaner who fiercely scrubs the floor, then she slips away from work to steal turpentine from the church votive candles, blood from the butcher and clay from the fields. These she combines with other elements to mix the paints she uses at night, covering panels with fruits and flowers that seem to regard us in alarm. Inspired by the true story of a woman whose work is now in many museums. Came from France as the year's most honored film, winner of seven Cesars from the French Academy, including best film and best actress. 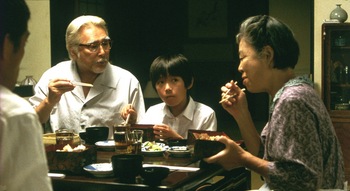 "Still Walking." Twelve years ago, the eldest son, doted on by his parents, drowned while saving a life. Every year the family gathers in his memory; the second son hates this because his father blames him for not being the one who died. The guest of honor is the pudgy, squirmy loser whose life was saved. This annual rite, we realize, is an ordeal for everyone except the bitter father, and probably him, too. Written and directed by the great Hirokazu Kore-eda, in some ways the heir to Ozu. Winner for best director, 2009 Asian Film Awards. 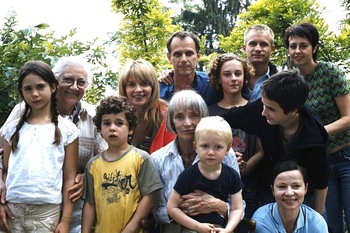 "Summer Hours" begins on Helene's 75th birthday. She's joined in the French countryside by her three children and their families. Much of the talk is about how far two of the them had to travel, and they're eager to be going home. Helene understands this. She understands a great deal. The film builds its emotional power by stealth, indirectly, refusing to be a tear-jerker, always realistic, and yet respectful of how sad it is to see your life disappear. Written and directed by Olivier Assayas, with Juliette Binoche and Charles Berling. 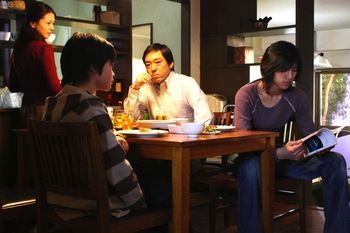 "Tokyo Sonata." About a family so locked into their lives they scarcely know one another. The autocratic father is fired and says nothing. He leaves "for the office" every day, and lingers with other jobless men. His son secretly takes piano lessons his father has forbidden. His wife observes much and is silent. Then the director, Kiyoshi Kurosawa, derails our expectations with two totally unexpected scenes, the second of spellbinding beauty which somehow resolves this story with masterful indirection. 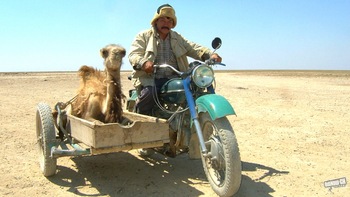 "Tulpan" shows such an unfamiliar world it might as well be Mars. The horizon is a straight line against the sky in every direction. There are no landmarks, no signs, no roads. We are among the modern yurt dwellers of Kazakhstan. A young sailor has come home to live with his sister and her family. They negotiate with a poker-faced man and his hostile wife for the hand of their daughter. Humor involving a veterinarian on a motorcycle and a fresh cucumber salesman. Also a great silence and desolation, which we sense they love. Doesn't there have to come a time in everyone's life when they should see a deadpan comedy about the yurt dwellers of Kazakhstan? Won the Un Certain Regard award at Cannes 2008.

[ Notes: In addition to these films, on my earlier best films lists for 2009 I named "Departures," "Everlasting Moments," "Silent Light," "You, the Living" and "The White Ribbon." Below, all of the trailers from IFC Films represent films that are streaming online, some of them free. ]