Films that are not for the dying so much 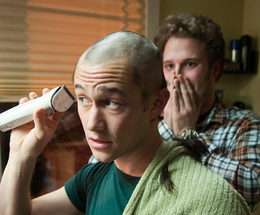 There are two good films at Toronto about the same thing: Romance that begins during the last months of life for a person with cancer. I wrote earlier about Gus Van Sant's "Restless," and now here is "50/50" by Jonathan Levine, with a screenplay by Will Reiser that is said to be semi-autobiographical. As a person who has been in love while dealing with cancer, these films inspire introspection, and while I admire them I realize they are to some degree escapism--poised at the "Bargaining" position at the center of Elisabeth Kübler-Ross's five stages of grief.

"Restless" stars Henry Hopper as Enoch, a young man obsessed with death, who learns to love life though the love of Annabel, a character played by Mia Wasikowska. She has only months to live and wants to use them to experience a real romance for the first time, not focus on death. "It is," I wrote, "an attempt by these two characters to steal a little happiness from the inexorable march of time." It strikes a tender elegiac note.

"50/50" is a romantic comedy with a sideline in the Buddy Movie formula. Joseph Gordon-Levitt plays Adam, a likable public radio writer in his late 20s, in fine health until he discovers the pain in his back is an alarming form of cancer. His chances of survival are, yes, 50/50. He is always plausible in the role. Seth Rogan is Kyle, his good friend, who does everything he can to keep him smiling and upbeat. Anna Kendrick is Katherine, Adam's therapist, and Philip Baker Hall is Alan, a plain-spoken and realistic chemo patient in a group session. 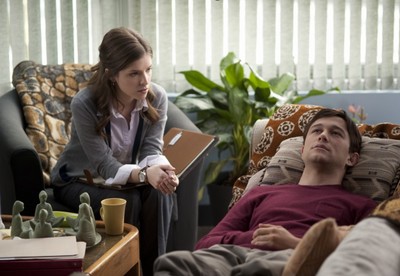 As the film opens, Bryce Dallas Howard plays Rachael, Adam's girlfriend. As she begins to waver in her commitment after his diagnosis, a tentative sweetness slowly grows between Adam and Katherine. The heart of the movie is in Rogan's broad but emotionally affecting work as the buddy, whose willingness to do anything for laugh is over the top but often very funny, and whose character is warm and lovable. No doubt the TV ads will focus on the Buddy laughs and not the disease.

Movies like these are made for the living and not for the dying so much. They provide a way for us to deal with our fears. The most realistic element in either movie is Rachael, the girlfriend, who responds to her boyfriend's illness not with positive support but with a general unwillingness to get involved in the messiness of disease. There is an upside to this: If he survives, he will know not to marry her, because she will be at his side in health but not in sickness. The most convincing characters are Alan, in the support group, and Katherine, its leader. The doctors are not particularly sympathetic. They have been down this road before.

My doctors have been much more human. But it would be irrelevant to compare either movie with my personal experience; more general questions arise. The fact is that few people with possibly terminal cancer enjoy such relatively painless periods of surcease. Nor are the side effects of treatment limited to a certain amount of discreet nausea. We aren't given the specifics of Mia Wasikowska's disease; Annabel's very short hair may indicate that chemo was used. If so, it seems to have left her surprisingly unaffected. Both chemo and radiation can cause nausea, weight loss, depression and exhaustion. They can be devastating. 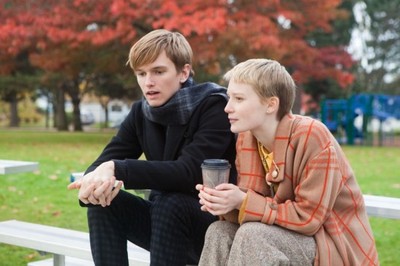 If Annabel is somewhat pain free, Adam's back pain could indicate cancers of the spine or inner organs, and is likely to grow severe. That will hurt. He will be given pain medicine. The most common forms will have such effects as deceptive euphoria and persistent constipation. They do not allow the sort of calm he exhibits here. Caring for such a patient will involve more than vomit bags, and may include messy intestinal details.

The people closest to the patients will be seriously tested. The patient may drift in a neverland of medication, but the lover becomes a caregiver. Regular sleep us unlikely, Daily routines are thrown off. Hospital stays are routine; these patients have a great deal of time do so romantic things and occupy touching spaces and talk as if they had more time. My wife's life was dominated for months by the demands of my illness. Her own life was on hold, and it became a lonely and demanding experience. It's at a time like that you really discover the person you married.

We need films like this. They help us deal with life, not death. There is a film that is unrelenting in its honesty about cancer, "Wit" (2001), by Mike Nichols, starring Emma Thompson. I thought it was one of the best filma of the year, but after my illness, thinking to view it again for a Great Movie review, I found I simply couldn't look at it. It was too painful. Perhaps that's why it played on HBO, and didn't go out theatrically. Movies can be so real we look away. I didn't admire "The Bucket List," in which Jack Nicholson and Morgan Freeman were dying men who set off on an escapist adventure, but I understand why other people did.

Movies idealize the dying. Many years ago I observed this in "Love Story," and created one of the first definitions in my Movie Glossary: Ali MacGraw's Syndrome. That's the medical condition in which you grow more and more beautiful until you die. Certainly Mia Wasikowska is as ethereal at the end as at the beginning, and Joseph Gordon-Levitt holds up pretty well. They are what they need to be in these two films, which I expect people to like as much as I did. That's as it must be.