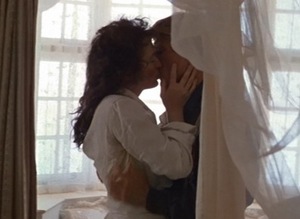 When Sydney Pollack was making "Out of Africa" in 1985, he considered the problem of how to film Meryl Streep and Robert Redford in love scenes that were not explicit, yet were erotic. "When I have Streep and Redford together," he told me, "I don't want to see them strip naked and writhe around in bed together. The challenge was to find love scenes that would have emotion and passion and yet not violate a certain place where we want to see them. There are two really sensual love scenes. One of them is the undressing scene. I always like scenes like that. I think they're sexy. I tried to make a sort of passionate dance out of them undressing each other. The second scene consists of three absolutely terrific lines I took out of a screenplay that was written in 1973 when Nicholas Roeg was going to direct this project. It's only three lines, but what lines: "Don't move. I want to move. Don't move."

Swept by waves of joy: Marianne and Johan in "Silent Light"

I say that having just seen three films back to back that contain powerfully erotic passages. Maybe you will not agree. Maybe you've become accustomed to writhing and thrashing about and frantic aerobic breathing and the sounds people don't make when something exciting ends, as it always must, in trembling silence. And then, unless there is an immediate fade, the directors face one of their most difficult challenges: What do the characters do then? I would not much want to see Redford and Streep writhing and thrashing, or Newman and Taylor, or Brad and Angelina, or Juno and Paulie. It would be a violation of their...importance. The three films are "Silent Light," "Everlasting Moments" and "Medicine for Melancholy." Reviews will follow in a few days or a week. Here I'll discuss what the Brits might call the "nasty bits," although in these films the scenes are solemn and transcendent. People who are deeply in love, especially at the beginning or even before the beginning, treat one another with a kind of reverence, a holiness. They are weaving a spell. They are starting a story not yet told. They are facing destiny.

That destiny may not include happiness. In fact, in all three films, the future is very much in doubt. Falling in love may not mean living happily ever after. It may mean being still in love, but unhappy ever after. Such a risk charges the relationship with real risk. They are holding each other precariously on the brink of a great fall. 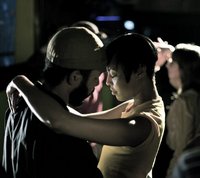 A warmth is growing: Wyatt Cenac and Tracey Heggins in "Medicine for Melancholy"

"Silent Light," directed by Carlos Reygadas, seems to involve unlikely characters. They are all members of a Mennonite community in Mexico--although the word "Mennonite" is not said by anyone, the characters speak in a German dialect, and you must play close attention to conclude they are in Mexico. Reygadas is not interested in superficialities. He considers characters who are profoundly committed to their faith, are rigorously honest, and would rather not be in this situation at all. There is a married couple, 40ish, with six children. And a local woman. We learn next to nothing about her personal life.

The man and his wife love one another. But the film, which is stately and beautiful, shows a great silence at the breakfast table, and we feel sorrow that is not explained. They say they love one another, and we believe it. Later the man walks out onto a hilltop in the fields and the other woman is standing there waiting for him. They smile as if not believing how happy they are to see each other. Fingers caress faces. They kiss. They kiss deeply, sincerely, for a long time, and it is not a preliminary to tearing off each other's clothes. They are hungry for each other's lips. They kiss in passion, but even more to comfort and caress

It is their doom to have fallen in love. The man seeks counsel from his father and a friend. He conceals nothing. His wife knows. Everyone believes he is a good man. We see that both women are good women. Everyone agrees that what is happening is wrong. This film does not presume that the man should leave his wife and be with this other woman. When he and the woman finally go to bed with one another, there are no gymnastics, no wild cries, no displays. They are making love. They mean it. Don't move. I want to move. Don't move. 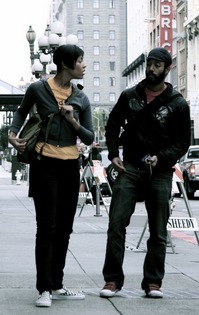 "This IS a one-night stand."

"Medicine for Melancholy," by Barry Jenkins, is about two 20-something African-Americans in San Francisco. They have a one-night stand and wake up hung over and regretful. I will leave out the plot details. At the end of a long and good day together, each has each started to suspect the other is someone special. They make love properly. We see no explicit nudity. We see their faces. They don't remember what they did last night, but they will remember what they are doing now. They are gentle with one another. There is a shot of bare flesh. It shows her fingernail lightly running along his spine. The shot is held only as long as that would take. It is incredibly erotic. There is a fade after they finish, and then she is standing by the window and saying she is hungry. Do they go to a restaurant? No, they go grocery shopping. When two new lovers go grocery shopping together, they are playing house, and they both know it.

"Everlasting Moments" is a great work by the Swedish master Jan Troell. The lovers here never even quite touch. The woman is married to a dock worker who is kind when sober and monstrous when drunk, and does back-breaking labor to support them, which she appreciates. To raise money for food, she tries to pawn a camera. The older man who owns the camera shop agrees to buy it but says she must hold it for him, and take photographs. In taking these pictures, she learns to think of herself in an entirely new way, and her life is enriched. The man clearly has fallen in love with her, and she with him, but they never say so, and they never need to say so. Their lives are better just for knowing one another. The tension between them, as her fingers almost touch his face, is more sexual than you can imagine.

These films are reminders that sex is important. It has meaning. I have no moral rules to lay down here, and when I was unmarried certainly my own genitals sometimes went cheerfully--even sincerely--astray. What people do is up to them. But these three titles are reminders that sex has become perfunctory in so many movies. It is plugged in like a chase scene, a fight, a gag line, a tear-jerking moment, a sunset. All part of the buffet.

There once was a time when movies approached eroticism with some awe. Now too often it is trivialized. How did it happen that exhibitionism became confused with sexiness? When did intercourse become something to be rushed through? The editing pace of many movies allows no time for caressing or foreplay; the lovers are so overcome they rip off clothes passionately and commence against the nearest wall or on top of the closest surface. A proper regard for the importance of human intimacy is the enemy of the 1.5-second ASL (average shot length) modern entertainment. Meet-and-screw is the best friend.

In society at large, bold and energetic displays of sexuality have become confused with sensuality. Strippers and Chippendale men objectify their bodies as trashy displays. I have seen more than one striptease in my life. The best I have ever seen was by Tempest Storm, in 1968. She performed slowly, almost sedately, as if in her boudoir. I interviewed her after the show. "I actually put on more clothes than I take off," she said. "There's some psychology in this. A performer who can communicate a feeling of modesty is sexier than one who just strips." That's what the movies are losing. Modesty. The feeling that the characters consider their bodies of importance, and that sharing them with another has meaning.

In "Out of Africa," could Pollack have found a way to allow Streep and Redford make love? Probably, but I think he made the right choice. He evoked the nature of their feelings, and used cinematic strategies to photograph in a romantic style. He didn't record, he heightened. Streep and Redford are fine actors, and have certainly made love in the movies, but star power can be a distraction. After a love scene progresses beyond a certain point, no matter how gifted the actors, how brilliant the director, we are only human and must think, good lord! Meryl Streep and Robert Redford! The spell is broken.

The actors in the films I have mentioned are all completely unknown to most moviegoers, although two have done a fair amount of TV. They are beautiful people, but in a plausible way, if you see what I mean. There is nothing like love in your eyes to make your face glow. There are no conventional movie star looks here. They are free to play these kinds of characters. And how inspired they must have been to appear in love scenes that grew organically out of their characters, were necessary, were critical in the telling of the stories. Don't move. I want to move. Don't move.

"Everlasting Moments" and "Silent Light" are in current release in art theaters. "Medicine for Melancholy" and "Everlasting" are films, that you--yes, you, if you live in North America--can actually see. Many readers complain that "art films" never play in their town, or even their state. Both films are available via on-demand on many cable systems, including Comcast, Charter, Cox, Time Warner, and Cablevision.

My 1968 interview with Tempest Storm.