Based on the R.J. Palacio novel of the same name, “Wonder” follows a year in the life of August Pullman (Jacob Tremblay), Auggie, for short. He was born with a genetic abnormality that has required him to undergo surgeries and medical treatments since his earliest days.

Director Stephen Chbosky has managed to take a story that could have been painfully mawkish and made it genuinely moving in (mostly) understated ways. The makeup work here is solid and believable, revealing Auggie’s sad eyes behind downturned facial lines and nubs of skin for ears. He’s a prepubescent Rocky Dennis. The script, co-written by Chbosky, Steve Conrad and Jack Thorne, is wise to establish quickly that Auggie is a regular kid in every other way. He loves “Star Wars” and Minecraft. He has an aptitude for science, a sly sense of humor, and an active imagination that helps him navigate uncomfortable situations. (“Wonder” occasionally dabbles in magical realism, but in ways that are more amusing than distracting.)

Uniformly strong performances help ground the story. Tremblay, who showed instincts beyond his years in the devastating 2015 drama “Room,” provides both a sweetness and an intelligence to his 10-year-old character that make him accessible even when he’s wearing an astronaut helmet to hide his face. Julia Roberts and Owen Wilson find just the right notes as his supportive parents. But the real surprise here is Izabela Vidovic as Tremblay’s older sister, who’s been generous enough to allow her brother to be the center of the family’s attention at the expense of her own emotional need.

His mom, Isabel (Roberts), put her career on hold to homeschool him from the beginning in the family’s Brooklyn brownstone. But now that Auggie is of middle school age, Isabel and his dad, Nate (Wilson), decide to send him to Beecher Prep so he’ll learn to socialize with other kids and become more comfortable in the outside world. All are understandably apprehensive about this major shift, fraught as it is with the potential for bullying and isolation. And indeed, when his parents walk him to the front gates and send him off on his own for the first time, the kids on campus stop their conversations to gawk and part for him. But Chbosky depicts this event matter-of-factly, allowing the tension of the moment to emerge naturally.

There are some familiar figures here: the hip teacher who gives innovative assignments that just happen to coincide with the film’s themes (Daveed Diggs); the mean rich kid who torments him alongside a posse of brutes (Bryce Gheisar); the shy girl who might become an unexpected friend (Millie Davis). But the effortless connection Auggie strikes up with a kid named Jack Will (Noah Jupe)—who also feels like an outsider as a working-class scholarship student—is one of the film’s truest joys, as well as a source of legitimate drama.

Just when “Wonder” seems to be settling into a routine at school, it shifts and revisits that first day from a variety of other characters’ perspectives. So we learn what happened to Auggie’s lonely sister, Via, when she met a cute new boy (Nadji Jeter) and dared to sign up for the high school play. We get a glimpse into Jack Will’s home life, which enriches the significance of his relationship with Auggie. We find out what’s really going on with Via’s lifelong best friend, Miranda (Danielle Rose Russell), who suddenly snubbed her at the start of the school year.

As he did with his insightful young adult drama “The Perks of Being a Wallflower,” Chbosky handles major adolescent events with decency and grace. The cumulative effect—as overly simplistic as it may sound – is the powerful understanding of what it feels like to walk in someone else’s shoes. The emotion of this enlightenment sneaks up on you in quiet ways. Even Wilson, whose character feels underwritten beyond providing comic relief during moments of family tension, gets perhaps the most heartbreaking, uplifting line in the whole film. You’ll shed a tear or two—especially if you’re a parent—and they’ll be totally earned.

All of which makes it so frustrating that “Wonder” throws that restraint and goodwill out the window in its finale and turns wildly sentimental. Chbosky cranks up the feel-good with a climax full of wild applause at the most clichéd place possible: a school assembly. How is it possible that so many cinematic moments of truth take place before a packed auditorium?

But the film does so much so well for so long that its pat conclusion feels forgivable. Early on during a screening of “Wonder,” when the film first reveals the scars and deformities that mark the hero’s face, my eight-year-old son turned to me and whispered, “He looks weird.” Once the movie was over, as we were walking out of the theater and I asked him what he thought, he exclaimed: “I loved it!” Such is the film’s transformative power. It is a machine for creating empathy. 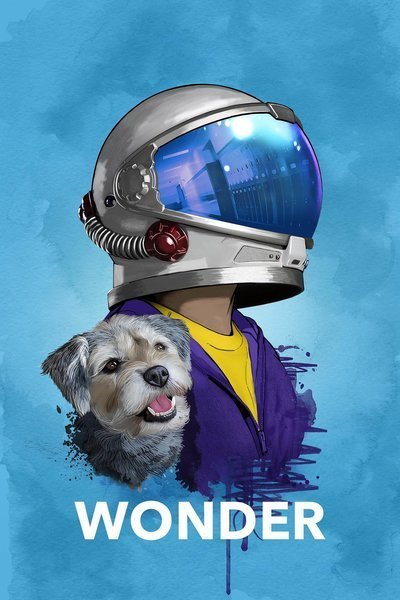 Rated PG for thematic elements including bullying, and some mild language.

Izabela Vidovic as Via

Noah Jupe as Jack Will