"The Monuments Men" tests the proposition that an appealing cast can put almost any script across. Near the start of this World War II drama about Yanks searching for art stolen by the Germans, star George Clooney asks, "Who will make sure that the statue of David is still standing and the Mona Lisa is still smiling?" and the audience thinks, "Why you, George, and your merry band of character actors playing over-the-hill soldiers, and us, if we can tag along too." By the midway point, that rah-rah sentiment has downshifted to, "You guys, I guess—and where are we now?" By the end, it's something like, "Wake me when you find that statue you're always talking about."

That's a harsh assessment of a film whose heart is in the right place, but heart alone does not a good film make. Directed by Clooney from a script he wrote with his regular filmmaking partner Grant Heslov, "The Monuments Men" is a throwback to a very specific type of World War II adventure picture: a star-studded adventure made between ten and 20 years after the war's end. Such films were aimed at a morally exhausted U.S. audience that wanted to be congratulated for its role in ending tyranny—however large or small or nonexistent it might have been—but that also wished to be entertained, preferably with a caper, a romance, and knowing jokes about bureaucrats and regulations.

Clooney and Heslov's film offers all these elements, plus an alternately rousing and lyrical score by Alexandre Desplat that evokes "Bridge on the River Kwai" and "The Great Escape." (Brass, kettle drums, whistling.) As the movie sends Clooney, Matt Damon, Bob Balaban, John Goodman, Bill Murray, Hugh Bonneville and Jean Dujardin—playing art historians or art experts of one kind or another—in search of German-pilfered paintings and statuary, it adds something else as well: an appreciation of how hard it is to get people to care about art when cities have been reduced to rubble and whole populations wiped out.

The movie's best quality is its willingness to be real about the heroes' prospects and illustrate how hard it is to make a moral or philosophical case for their mission when millions have already died. When a field officer informs Clooney's Frank Stokes that even though a particular church contains significant art, they'll still bomb it if Germans decide to use it as a hiding place, you understand in practical terms where he's coming from, because the lead-up to this conversation took you to the beach at Normandy, post-D-Day, then past many bombed-out cityscapes. "The Monuments Men" presents its heroes as mice skittering through the margins of history, trying not to get stepped on. They're mostly too old or out-of-shape to be effective soldiers, and they're aware that the combat troops they pass in the field would support their mission only to the point where they had to choose between saving a Picasso and getting shot.

John Frankenheimer's action thriller "The Train," starring Burt Lancaster as a French resistance fighter trying to stop Germans from looting the country's art at the end of the war, covered these themes in some depth, but with a grimy, sinewy, immediate quality. "The Monuments Men" is going for something different: a realistic portrait of wartime, one that shows the heroes being thwarted by higher-ups who aren't bad people but just have different priorities, and that isn't afraid to wander off into nooks and crannies of the main plot and let its characters hang out and just exist.

This would all be wonderful news if the film had a discernible shape and a bit of cinematic flair. Unfortunately, it's the most visually un-dynamic film George Clooney has ever directed, a succession of plain vanilla long-shots and closeups that betray no sense of how to block actors within a moving frame. (Odd how each new film Clooney makes is less visually interesting than the one before; it's as if you're witnessing a learning curve in reverse.) Clooney and Heslov's screenplay, meanwhile, amounts to a series of handsomely decorated, intelligently acted, pleasantly shaped, sometimes amusing scenes that ultimately don't add up to much. The not-quite-romantic subplot between Damon's character and Cate Blanchett—cast as a Belgian secretary for the German who's organizing most of the art thievery—is not charming, not sexy, and ultimately doesn't even make much dramatic sense; there are more botched subplots where that one came from. Every now and then, Clooney will chime in via voice-over to tell you where everyone's going, or what that scene that just ended meant to the unit, and to the mission. The narration is so slapped-together-sounding that you can picture the star in a recording studio scribbling lines on a legal tablet while viewing a scene that's not coming across, recording a passage in his affably gruff voice, then turning to the booth to say, "I'm thinking maybe one more take, but this time without the word 'deployed.'"

Every now and then, "The Monuments Men" produces a memorably charming or haunting moment. There's an appropriately underplayed sequence of the men discovering a wooden barrel filled with tiny, misshapen bits of gold, then riding a freight elevator in silence as they think about where the bits came from. There's a fine comic scene of Balaban instantly seeing through a deception, but taking his sweet time exposing it because he's trying to get his mind around how stunningly obvious it is. The initial "getting the team together" montage has a brief close-up that reminds of what a truly great actor John Goodman is: he suggests a character's entire self-image through the jaunty way he cocks his helmet. This is not a terrible movie. It's just not consistently good enough to get excited about. It's the kind of film that you'll stumble across on TV, watch for a few minutes thinking, "This is all right, I don't know why everybody was so hard on it," then change the channel. 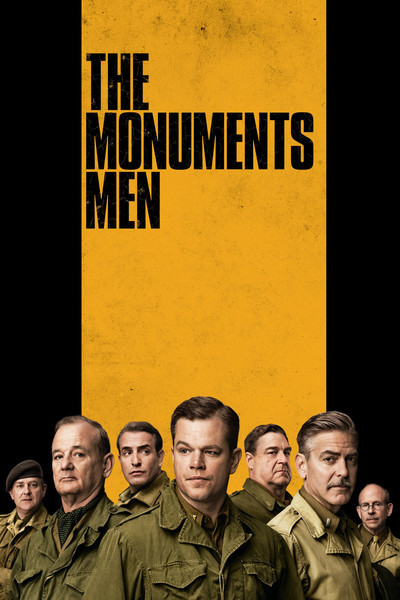