How odd that “The Imitation Game,” one of the more rousingly entertaining crowd-pleasers coming out this holiday season—as endorsed by its People’s Choice Award at the Toronto film festival—also happens to be one of the most devastatingly sad.

On one hand, this is a tense World War II thriller about a stellar team of Brits who cracked Nazi Germany’s Enigma code. The movie boasts its own inspirational rallying cry, repeated three times in case you miss it, which would be perfect for embossing on a holly-bedecked greeting card: “Sometimes, it is the people no one imagines anything of who do the things that no one imagines.”

On the other hand, it is an examination of the tragic circumstances that befell Alan Turing, the film’s central hero, who brings victory to the Allies by inventing a revolutionary machine that would give birth to the computer age. He would later be publicly vilified and savagely punished for engaging in homosexual  activity, which was criminalized in England at the time, before committing suicide in 1954.

Instead of being festooned with a chest full of medals, the closeted genius who saved countless lives by significantly shortening the war was cruelly subjected to chemically-induced castration in lieu of jail time. And, because much of the details were kept classified for 50 years, few knew of the extent of his wartime feats, even though he was awarded the Order of the British Empire for his services in 1945. He was officially pardoned of his offenses by Queen Elizabeth in 2013—a case of too little too late.

This atypical biopic about the brilliant, impossibly arrogant and socially awkward mathematician (played by Benedict Cumberbatch, impeccably perfect in every way) is a somewhat hard read at first. Most likely, it was the intent of screenwriter Graham Moore to make a puzzle out a film about puzzle solving. That is not necessarily a bad thing, however, once the pieces fall into in place. The fractured narrative starts off as a mystery in 1951 with a detective investigating a burglary at Turing’s home where, strangely, nothing was stolen. Eventually, the plot flashes back to 1928 and shifts into a heart-breaking love story as a teen Turing, a brutally bullied school-boy prodigy, chastely falls for a fellow classmate named Christopher.

But “The Imitation Game” is most on its game when it primarily sticks to being a John le Carre-lite espionage  version of “Revenge of the Nerds,” beginning in 1939 as it introduces a battleground of the mind that relies on superior intellect rather than bombs to beat the enemy. Norwegian director Morten Tyldum in his English-language debut provides just enough science to explain what is at stake while escalating the beat-the-clock tension involved in the mission conducted by Turing and a handful of other high-IQ cohorts. Alexandre Desplat’s hauntingly propulsive score further enhances the suspense while capturing the gravity of the situation.

It might seem a no-brainer to hire Cumberbatch for the job of bringing Turing to life. After all, what other actor these days is as well-suited to emblemize an aloof smarty-pants? Sorry, Robert Downey Jr. The torch has been passed. Instead of constantly reminding “Sherlock” fans of his Emmy-winning role as the Arthur Conan Doyle’s master of deduction, Cumberbatch has broken his own code of how to distinguish this particular eccentric genius as a completely separate but yet no less compelling entity.

To portray Turing, Cumberbatch’s seductive purr is less mellifluous, his lips are slightly pursed, his gaze is often averted and, despite his unwavering confidence in his thinking skills, there is an air of vulnerability and melancholy about him.

But, like Sherlock, Turing is given to verbal dust-ups that often end amusingly, especially with such haughty superiors as the uncompromising Commander Denniston (a superb Charles Dance, whose patrician nose practically rears up in disgust whenever his by-the-book overlord encounters Cumberbatch’s defiant whiz). Turing also has his protector in Mark Strong’s head of intelligence, who calmly, coolly and with a sly wink runs interference for his not-exactly-diplomatic secret weapon at every turn.

As for the rest of the code breakers, Matthew Goode stands out as a caddish chess champ Hugh Alexander, who initially butts heads with Turing until he realizes the depth of his abilities. On board as John Cairncross is Allen Leech, best known as Branson the Irish chauffeur-turned-terrorist-turned aristocrat on “Downton Abbey,” who is the most tolerant of Turing’s idiosyncrasies.

If anyone comes close to matching Cumberbatch’s efforts, however, it is Keira Knightley. She brings a much-needed warmth, humor and Anglicized spunk to the proceedings as Joan Clarke, immediately winning over the audience’s affections when she is mistakenly pegged as a secretarial candidate while trying out for a code-breaking position. Clarke is as much of an odd duck as Turing—and perhaps even brighter—as the lone female involved in deciphering Enigma. Since it is considered “indecorous” for a single woman to work and share living quarters alongside men, she must sneak about to contribute to the effort.

Some of the best scenes involve Clarke and Turing, who confide in one another as equals—especially since both must hide their true identities. One of the more meaningful moments arrives when Turing jealously watches as Clarke immediately charms Alexander, a shameless pickup artist. When Turing asks her how she so easily made him like her, Clarke replies with Knightley’s posh accent, “I’m a woman in a man’s job. I don’t have the luxury of being an ass.” The "like you" at the end of that sentence is implied, of course.

Matters turn slightly hokey as the final solution to Enigma code relies on several “By Jove, I’ve got it” revelations. But, by then, you will likely be fully invested in the outcome, no matter how out of left field it might seem.  Some of Cumberbatch’s most affecting work is when the older and close-to-defeated Turing is at the end of his rope, unable to even focus on a crossword puzzle because of the drugs he has been given. But as I sit here typing away, I realize I have Turing to thank for being able to access a wealth of information with just a few key strokes and a click of a mouse.

Not only did Turing help save the world, he continues to influence it every day. 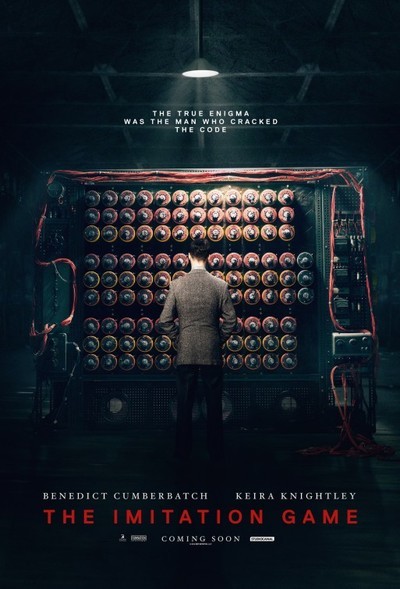