“Windfall” is the kind of acting experiment that usually works for me. Trap three talented actors on a single set and bounce them off each other. Sign me up. And the premise here is strong enough to keep the film afloat for about an hour as these very different acting energies collide in the middle of the room. Then writers Justin Lader and Andrew Kevin Walker realize that they haven’t really figured out how to end this movie, and the goodwill from that first hour starts to dissipate as the tone changes radically. Still, there’s at least one great performance in here, and the whole venture clocks in at a blissfully brief 90 minutes or so. It’s an arguably failed experiment, but it’s never painful.

A man (Jason Segel) who will never be named—and neither will the other two major characters—wanders around a nice vacation home in the desert. He drinks orange juice, throwing the glass far out onto the property when he’s done. He just sits and enjoys the fresh air. He starts to get a little more serious about the business at hand when he rifles through an office and finds some money hidden in a book. The man is about to leave with a Rolex and some cash when the owner (Jesse Plemons) arrives with his wife (Lily Collins). They are startled to see the invader and a relatively tame hostage situation unfolds. This isn’t exactly “Dog Day Afternoon.” It’s clear that the man isn’t in this for violence, and the CEO homeowner even tries to talk him through what to do next. He’s going to need more than what was in the office to get away, and so they actually call the CEO’s assistant to have money sent to the vacation home. That will take around 36 hours—plenty of time for things to go wrong.

Segel downplays his natural optimistic charisma in "Windfall" in a way that doesn’t completely work. No offense to the range of the actor, but I wished for a version with a slightly more desperate and dangerous home invader than what we have here, especially given how this tale ends. However, the way McDowell and Segel approach this guy allows Plemons to steal the show as the most confident person in the room. He’s billed only as CEO, and he nails the kind of arrogance that comes from massive success without resorting to scenery chewing. The CEO is convinced that this can’t be random. Why did the guy think that no one would be there? And the CEO knows that he’s probably on a number of enemies lists given how much downsizing he’s done to afford a place like this one. Does the robber hold a personal grudge?

Plemons brings such a fascinating energy to his character that he really holds the film together. So much so that when he disappears for a long nighttime conversation between Collins and Segel, the film starts to sag. It never recovers after that scene. Definitely not in its final beats that I just don’t buy. Part of the problem is that “Windfall” never achieves the slow burn it needs for the conclusion to be earned. It’s not building tension as much as treading water in an interesting way. So when it explodes, it feels sudden. Although maybe that’s the point. We never know when a decision will blow up in our face—decisions as drastic as choosing to rob a home or marry the wrong person come with inherent danger for anyone, CEOs and those he’s downsized alike. 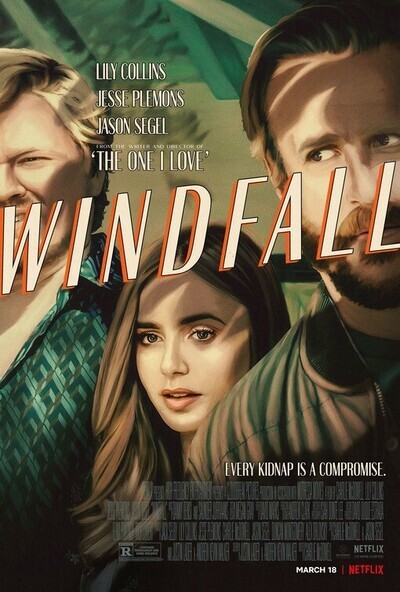