When the Game Stands Tall

To fully understand what’s in store in the real-life football parable “When the Game Stands Tall,” it’s probably good to know that star Jim Caviezel’s most noteworthy film role was as Jesus in “The Passion of the Christ.”

Turns out his ability to preach and sway his disciples comes in pretty handy as Bob Ladouceur, the high-school coach behind the miraculous decade-plus, record-breaking streak of 151 wins achieved by the De La Salle Spartans of suburban Concord, Calif.

Stoic, soft-spoken and solemn—think the opposite of blustery Al Pacino in “Any Given Sunday”—Coach Lad, as he is called, doesn’t so much give pep talks as deliver soul-enriching sermons. He underplays the importance of collecting trophies and beating opponents and instead promotes a sense of brotherhood, having your teammate’s back and pushing yourself to the limit and beyond to achieve your goals.

His approach to the game, one that he has given most of his life to, is perhaps best summed up in a quotation from Matthew 23:13 that is recited onscreen: “Whoever exalts himself shall be humbled. And whoever humbles himself shall be exalted.” In other words, it is not about you, it is about others.

All these sentiments are worthwhile, of course. And considering that De La Salle is a Catholic school and Coach Lad also was a religious studies teacher, they aren’t gratuitous. Still, most often in its early stages, the melodrama onscreen edges precipitously close to dissolving into a puddle of platitudinous pabulum served in the manner of a rote Sunday school lesson.

Part of the problem with this particular sports story is the difficulty of presenting De La Salle as an underdog. Which is why producer David Zelon (“Soul Surfer,” another Christian-influenced sports film) and director Thomas Carter (“Coach Carter”) decided to zone in on the year 2004, when the Spartans lost their focus after Coach Lad suffered a life-threatening heart attack (turns out he was a secret smoker—a reason for a PG rating) and one of the team’s brightest stars is killed in a random shooting (the other reason for a PG rating).

With their leader sidelined and a tragic act of violence resulting in a painful absence in the lineup, the streak soon is as broken as the players’ sense of dedication. After losing the first two games of the season, Coach Lad is given the OK to resume his duties. And we as moviegoers apparently have paid enough penance and watched enough hardships to finally earn the right to see some actual football being played.

Of course, coming back from a two-game slump doesn’t exactly qualify as a resurrection even though the filmmakers pull out every trick in the book to make it seem that way. The actual turning point that prevents  “When the Game Stands Tall” from becoming totally insufferable arrives earlier when the kids go on a field trip to visit wounded veterans in a recovery facility. The nervous and ultimately heartfelt interaction between the fresh-faced actors and these wounded warriors who brave through their disabilities is the film’s first of too-few emotional touchdowns.

Certainly, it is preferable than hearing Coach Lad’s dutiful wife (Laura Dern, who tries her best but is ill-served by the script) observe for the umpteenth time that his job causes him to neglect his real family. How neglectful is he? He doesn’t even know how to grill a burger. Some dad he is. Watching him toss the charred hockey pucks into the bushes? Priceless, but not all that funny.

There are roughly 10 too many scenes of workouts involving giant tires pulled down the field by rope wrapped around a player’s body to symbolize their renewed drive. But the game action is fairly well shot and edited (although those bone-cruncher sound effects that resound every time someone gets hit are a bit much). And the young actors, topped by Alexander Ludwig (tribute Cato in “The Hunger Games”) as an ace running back, occasionally flash a welcome spark of spontaneity and share a natural rapport together.

But Michael Chiklis doesn’t get to inject nearly enough humor as Coach Lad’s more demonstrative assistant. And Clancy Brown as Ludwig’s father is beyond redemption as the standard overbearing abusive parent who lives vicariously through his son’s victories.

The final acid test of whether “When the Game Stands Tall” stands up to some of the greatest sports films? I have tissues at the ready when I just think about "Brian’s Song" and "Rudy," I’ve been known to shed a tear or two over "Field of Dreams" and I always bawl my eyes out during "The Blind Side" when it shows up on cable.

But this sucker for scoreboard sentiment was left dry-eyed this time. To be fair, there was a glitch at my screening of “When the Game Stands Tall” and the sound went out with seconds to go in the final game. But it’s doubtful that it would have made any difference, judging by what I could at least see. Just as any coach would tell you, it is not whether you win or lose, it is how you play the game. But even though "When the Game Stands Tall" comes alive occasionally, it is basically a dropped ball. 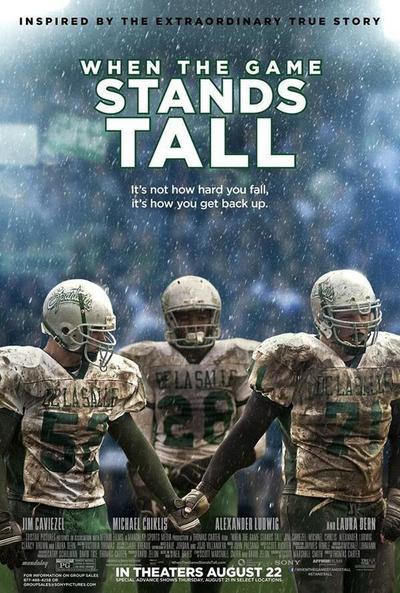 Rated PG for thematic material, a scene of violence, and brief smoking