The frightening process by which a parasite becomes untethered from its soul has been explored by an unofficial trilogy of films in 2019. It began with Jordan Peele’s “Us,” continued on through Todd Phillips’ “Joker” and culminated in Bong Joon Ho’s “Parasite,” all of which detail, with varying degrees of success, precisely why parasites tend to kill their often aloof hosts. Despite their considerable entertainment value, these pictures were ultimately mournful meditations on economic disparity that offered no easy answers on how to heal the societal ills they addressed. Director/cinematographer Jon Kasbe’s visually arresting and startlingly intimate documentary, “When Lambs Become Lions,” belongs in that same category.

Taking place in an unidentified corner of Northern Kenya, so as not to specify the identity of its primary subjects (each protected with an alias, though their faces are lensed with unflinching clarity), this film charts the systematic destruction of elephants by poachers who are parasitic in nature, profiting from the ivory tusks of the animals they slaughter. Yet what Kasbe has crafted is far more than an environmental polemic, aiming instead to conjure the power of his friend and colleague Bing Liu’s “Minding the Gap,” which masterfully demonstrated how cinema allows us to see ourselves reflected in the stories of others, even those to whom we would normally be diametrically opposed.

Filmed over the course of three years and clocking in just over 70 minutes (minus credits), “When Lambs Become Lions” is a triumph of shrewdly economical storytelling on the part of Kasbe and his co-editors Frederick Shanahan and Caitlyn Greene. For its first half, the movie toggles between the lives of a cocky poacher, dubbed “X,” and a morally grounded yet financially desperate ranger, Asan. Since Kasbe took the time to live with his subjects—sans cameras for the first couple months—he earned their trust so completely that they didn’t hesitate in performing illegal activities on camera. What’s striking are the number of similarities these men share, including a general dislike of violence. Asan opens up about the trauma he’s endured after witnessing the murder of elephants, whose trumpeting cries echo the screams of humans.

X is so disinterested in killing that he doesn’t even bother squashing a beetle, recalling the fun he had playing with them as a kid. Lukas, the ace hunter that he’s hired to carry out his dirty work, is skilled at using the poison of frogs to create arrows than can kill seven-ton animals, yet he claims that rangers are no less brutal, with their alleged penchant for feeding poachers to crocodiles. Though the film refuses to linger on gory sights, we do observe a group of rangers beating a poacher as he wails about his lack of options regarding how to pay for his children’s education. The real elephant in the room, so to speak, is the fact that conservation efforts in Africa were spurred not by lifelong citizens but white colonizers who appear indifferent toward the living conditions of those whose heritage they are determined to outlaw.

Like so many Kenyans, X and Asan had fathers who poached for a living, and both have done it themselves. It’s impossible not to understand why X would desire the sort of secure income that enables him to purchase a bicycle for his young son as a reward for receiving high marks in school. In contrast, Asan is barely scraping by, since his manager had failed to pay him for months. After one of his colleagues is killed in an ambush led by poachers, his wife cautions him against “being satisfied” with his job. Only at the midway point is it revealed that the link between these two men runs deeper that it may have initially appeared, as they share the same frame to strike a deal that causes Asan to lose all sense of his personal convictions. This is artfully conveyed by a shot of Asan’s foregrounded head blurring in focus, as the canopy of stars above him exude their piercing light.

It’s not long before Asan finds himself a target of judgment even in the eyes of his young son, who looks at his father with a penetrating stare evocative of Robert De Niro’s daughter in “The Irishman,” another film grappling with the consequences of living a violent life. Adding fuel to the flames of protest is Kenyan president Uhuru Kenyatta, whose public burning of $150 million worth of stockpiled tusks to affirm their lack of value when removed from an elephant was also prominently featured in Jennifer Baichwal, Edward Burtynsky and Nicholas de Pencier’s documentary “Anthropocene: The Human Epoch.” That film highlighted Kenyan nature preserves overseen by armed rangers as a ray of hope amidst our impending climate catastrophe, and perhaps the most optimistic aspect of Kasbe’s picture is the simple acknowledgement that neither X nor Asan are poachers by the time it arrives at its final cut to black.

Though the film’s publicity materials assure us that it “does NOT depict animals of any kind being harmed,” Kasbe did take his camera on ten hunts during the course of filming, and there is indeed a sequence in the picture where we see a poisoned arrow being shot and hear the cry of an elephant off-camera (we later learn that it fell into a river). This was the only moment in the movie that gave me pause, raising the question of a filmmaker’s responsibility in depicting such atrocities, capturing them on film for noble purposes by serving as an accessory to the crimes being committed. I felt just as uncomfortable watching this scene as I did during numerous moments in Tamara Kotevska and Ljubomir Stefanov’s galvanizing doc, “Honeyland,” which shows children getting stung by bees, and in one case, nearly being drowned, while the camera remains as motionless as Gene Tienery in “Leave Her to Heaven.”

Of course, interference of any kind would be antithetical to the cinema preferred by Kasbe, who believes that his own influence over the events depicted should be kept at a bare minimum. He made it clear to his subjects that he would not be a source of money to them, and proceeded to follow in their footsteps like a shadow, walking when they walked and going to bed on an empty stomach when they did (though he also volunteered to cook meals for them). Any attempt to alter the decisions of his characters would be, according to Kasbe, akin to compromising the truth, and by forcing us to experience the audible terror of the poacher’s prey, even without a trace of visible bloodshed, he ensures that it will haunt us long after we’ve left the theater. Regardless of whatever presumptions we may have about X and Asan, we cannot reach the end of this movie without seeing ourselves reflected in the fear, fatigue and familial devotion that flows from their eyes. 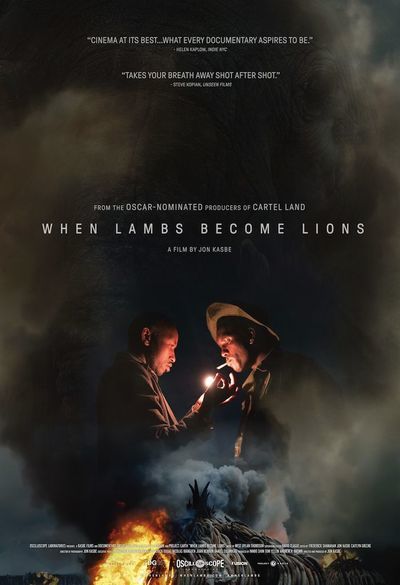