A woman walks alone through the untamed mountains and hills of Macedonia. She says nothing to the camera as she heads to a cliffside spot with no signs -- the directions are known only to her. Our fearless leader, Hatidze, climbs higher and higher until she stops at an unremarkable collection of rocks. She chips away for something behind these boulders, eventually striking her gold: a lively hive of bees, calmed by the smoke she brought with her, and their bright and shiny honeycombs. She tenderly extracts slabs of the insects’ handiwork and cups a few dazed bees into her own carefully made hive-like basket. Then, she climbs back down the mountain and through the hills. At home, Hatidze releases her fresh batch of bees to their new home, welcoming them with a sing-song chant. She’s lit by the sun behind her, the bees buzz around her as she continues the age-old tradition of wild beekeeping.

“Honeyland” opens on this gorgeous solitary moment, and it’s not the only chance directors Ljubo Stefanov and Tamara Kotevska will take to meditate on the balance between humans and nature. Hatidze operates almost entirely alone in this remote part of the country, pausing only to care for her partially paralyzed mother, tend to her other animals at home and make the trek to Macedonia’s capital, Skopje, to sell her harvest and shop. Her caring nature shines throughout the movie, even when her world is rocked by an unforeseen force: neighbors.

One day without warning, a rowdy family settles next to Hatidze’s domain. They bring with them all the noise her lonely life is missing: the mooing from their herd of cows, chirping from new chicks and the ringing cries of children. At first, she tries to make peace with the family and she befriends a few of the curious children. Unfortunately, the family decides to encroach on Hatidze’s bee business without heeding her advice, disrupting the natural balance of her life.

There’s enough human drama in “Honeyland” to distract even some of the more bee-phobic viewers. Away from her hives, Hatidze struggles to care for her ailing mom and wrestles with what could have been had her life taken her away from such a lonely place. The documentary takes a fly-on-the-wall approach when observing her experience, attempts to connect with others, the unruly family next door and their shared conversations. The camera doesn’t flinch when recording a bee slowly makes its way to sting one of the family’s young babies or when the family’s rough attempt at harvesting honey incurs the wrath of an angry swarm.

In a way, the neighborly spat can even be seen as a kind of rural allegory for the nature of capitalism. The family drives up the demand for bees and their honey without following the beekeeper’s golden rule, taking only half of what’s available to harvest and leaving the other half of the hive’s combs to their creators. “You take half, you leave half so they don’t attack my bees,” Hatidze warns. In disobeying her, they wreak havoc on the delicate ecosystem she’s built up over time, affecting them both.

But the documentary’s human subjects are not the only stars. More credit should go to the movie’s cinematographers, Fejmi Daut and Samir Ljuma, who not only brave getting up close to wild hives of untamed bees with a steady hand. They capture a sense of the bees’ microscopic world as they lap up leftover honey, climb out of the water and try to move one of their own after it stops flying. A number of shots look coated in warm, honey-colored tones, like that first opening scene and the candlelit arguments Hatidze shares with her mother.

The filmmakers are just as resourceful as their subject when it comes to using what nature’s given them. Most of the lighting in the documentary is just the sun or a candle, the camera’s jagged movements are the cinematographers adapting to their hilly surroundings to get that perfect shot. The directors get out of the way of the story and let nature take its course between the two factions. “Honeyland” is both an immersive experience and an undeniably gorgeous reflection on our relationship to nature. 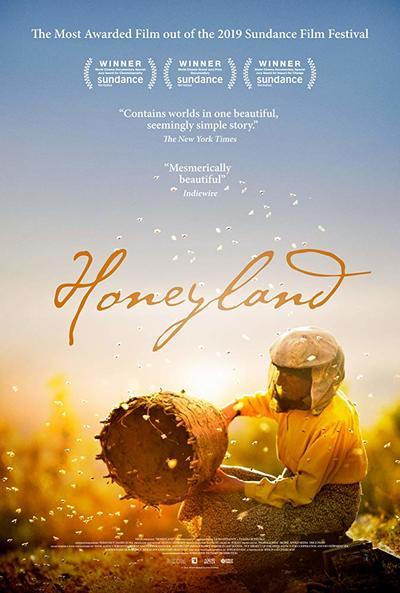