“Wetlands” is a film that wants to work in two ways: as a drama about a man desperately attempting to reestablish ties to his justifiably estranged teenage daughter, and as a gritty modern-day film noir filled with drugs, murder, gangsters, infidelity and even a genuine femme fatale thrown in for good measure. If first-time filmmaker Emanuele Della Valle had focused on one of these approaches, he might have come up with a reasonably compelling final product. But by shoving the two together and then tossing a couple of highly unnecessary subplots into the mix, he instead comes up with a terribly uneven narrative that doesn’t especially work as drama or noir and which manages to waste a pretty good cast in the bargain.

Adewale Akinnuoye-Agbaje stars as Babs Johnson (short for Babel, mind you), a one-time top cop in Philadelphia until he got himself caught up in a web of drug addiction and corruption that eventually led to an act so heinous that we are only informed of it via a gradually expanding flashback—in black-and-white, no less—running throughout the film proper. A year or so later, a newly sober Babs turns up in Atlantic City to work as a detective for the local police force in the hopes of reconnecting with ex-wife Savannah (Heather Graham) and their teenaged daughter Amy (Celeste O’Connor). This will prove to be a little more difficult to pull off than he thinks. Amy quite rightfully resents the fact that her father bailed on her for so long and now thinks he can get back into her good graces with such tokens as an ice cream cone or a fishing trip. As for Savannah, she is still bitter at her ex and is now romantically involved with a younger woman who is known only as Surfer Girl (Reyna de Courcy), who dreams of one day leaving the Garden State behind to head off to California to open her own surf shop.

While trying to mend fences in his personal life, Babs spends his professional hours trying to bring an end to the area’s thriving drug trade that is being run by local gangsters Jimmy Coconuts (Louis Mustillo) and Lollipop (Barry Markowitz). This also proves to be a little trickier than it seems because not only do the gangsters appear to be paying off the top cops in town, they also have Babs’ motormouth partner (Christopher McDonald) under their thumbs due to extensive gambling debts. To complicate matters even further, Babs discovers that Surfer Girl is also tied up in the local drug trade and has been courting danger by repeatedly shortchanging Jimmy and Lollipop in their dealings, a move that could end up putting Savannah and Amy in danger as well. Things quickly go sideways and when a dead body eventually turns up, all signs point to Babs as the killer. Oh yeah, while all of this is going on, a late-season hurricane is threatening to hit the area with unexpected and potentially metaphorical force.

“Wetlands” would clearly love to come across as a contemporary version of the classic film noirs that actors like the great Robert Mitchum used to crank out with offhand ease back in the day (though I seriously doubt that Mitchum would have ever consented to playing a character named Babs Johnson). Instead, the crime aspect of the story does not add up to much—those scenes feel oddly truncated (when the key murder finally occurs, the film has only about 15 minutes or so to wrap it up) and what we do see offers nothing in the way of surprise. (Even that traumatic flashback, once finally revealed in full, will not raise too many eyebrows.) The more personal stuff doesn’t work either because we never get any sense of the struggles Babs must be going through in trying to keep it together and show his ex-wife and daughter that he is once again worthy of their trust. Instead of fleshing out either of these areas, the screenplay instead wastes time on such dramatically pointless elements as Babs’ clandestine relationship with his partner’s wife (Jennifer Ehle), a newscaster who constantly pops diet pills in the hopes that she will not be replaced by someone younger, prettier and thinner. Then there is that hurricane, which is hyped to be a key element of the story but then peters out without making much of an impact. After this effort and Brian De Palma’s otherwise great 1998 film “Snake Eyes,” perhaps filmmakers should just agree that thrillers about murder and corruption in Atlantic City and hurricane subplots just do not mix.

“Wetlands” has a number of good actors but none of them are served especially well by the script. Akinnuoye-Agbaje provides an undeniably strong presence that is almost too much for the thin character he is playing while McDonald certainly makes an impression with a cheerfully odd performance that is arguably the best thing on display here. Heather Graham, on the other hand, is given virtually nothing to do but since it is nice to have Graham on the big screen in a major role for the first time in a while, I am willing to overlook that. On the other end of the scale, de Courcy, playing the character who is supposed to tie everything together, is one of the less distinctive femme fatales to come along in a while. The worst performance, however, is delivered by Ehle, who is not convincing for a single second as a newscaster, a lover or even as a plausible human being. To be fair, her character is so badly conceived—she seems to have been jammed into the narrative only to get Babs out of a tight spot with an admission of their affair—that Ehle should probably be commended simply for keeping a straight face throughout.

Other than the novelty of being the only example of a gritty crime drama featuring a key male character named Babs, there is absolutely nothing interesting or memorable to be found in “Wetlands.” The whole thing feels like the busted pilot to a mediocre television show and it is too blah to even get especially upset with, except in regard to the squandering of its actors. 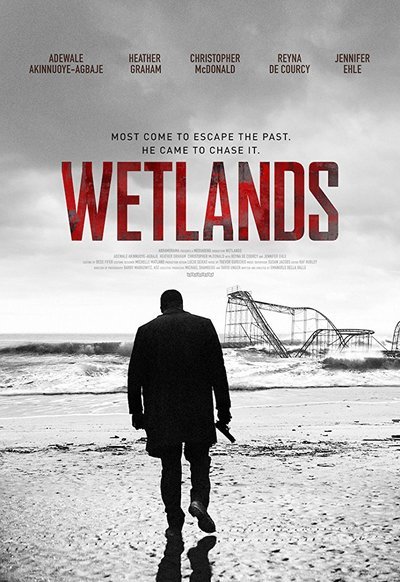