I’m going to be upfront here: this is one of those movies that really make me resent having to give out star ratings. “Wetlands” opens with a close-up shot of a creased epidermis that you think is one thing, then isn’t. But wait. Don’t get too relieved. The eighteen-year-old heroine, Helen, is tooling around some German town on a skateboard, and in voiceover, while a Peaches song plays on the soundtrack, she’s telling us about her…hemorrhoids. Soon she’s in a public bathroom. A disgustingly filthy public bathroom. Which she digs, she tells us, because she’s into “hygiene experiments.” And then she puts her hand WHERE? And licks her finger afterward? Yup? And then the camera dollies in to an extreme close-up of a pubic hair on the toilet seat. This is all before the opening credits.

“Three stars, Glenn Kenny, RogerEbert.com.” As the kids on the Internet say, “FML.”

But I’m sticking with the assessment, because. Even though “Wetlands” is absolutely, brutally unrelenting in its depictions of bodily functions and searching adolescent sexuality, it’s also an inventively sharp, briskly edited, spectacularly-acted post-adolescent coming-of-age story. It’s a tough sit (see what I did there?) a lot of the time, and to be honest, there were points when I thought “Can this movie please maybe go five minutes without mentioning anal fissures?” An unfair question, I guess, since much of the movie takes place in the hospital where Helen has to be treated for the very thing, the result of a shaving accident. From her hospital bed, the manically sexually adventurous Helen recounts the highlights of her various awakenings, ranging from her full-body shaving at the gentle hands of a much older co-worker to the drug-crazed adventure she and her best friend Corinna embark on after Corinna’s dealer boyfriend inadvertently leaves his stash behind. This latter scene, by the way, is one of the best and most exhilarating/harrowing cinematic depictions of drug-induced intoxication I’ve ever seen.

The movie, directed by David Wnendt, is based on an autobiographical novel by one Charlotte Roche, which was something of a success de scandale in Germany upon publication in 2008. The movie opens with a quote from an angry critique of the book, which says its characters “need God.” It’s not the absence of God that the material as such concerns itself with, but more the absence of a functional family. Helen’s parents are divorced, her mom’s a “spiritual explorer” who’s eventually settled on “the weirdest religion of all” (Catholicism, it happens) while her dad, early on seen inadvertently slapping his daughter in the face with an appendage that ought never be near one’s daughter’s face (it’s kind of funny, honest) is a guiltless roué. While Helen’s teenage attitude toward sex and sexuality is staggeringly irresponsible, there’s something refreshing about her cheerfulness in this respect. Honestly, if you’re a guy of a certain age and orientation, you might look at her and think, “Well, ‘hygiene experiments’ notwithstanding, I would have liked to have known a girl like her when I was that age.” If “Wetlands” disappoints at all, it is in having to ascribe all of Helen’s behavior to A Big Sadness, which is not illegitimate in and of itself, and as I suppose it’s a feature of the source material, there’s no getting around it. But it kind of undermines the political thrust of Helen’s blatant disregard for convention.

Of which the obsessive grossness is, I think, part of the point. It’s not early John Waters on steroids, but it is a little bit “Everybody Poops” for grownups. The gross and naughty bits are part of life, part of being human, and the film’s very insistence on that is going to strike a lot of people as completely gratuitous. Which, the film would counter, is exactly why it exists. I’ve given fair warning as to the gross-out factor (and I really hope that nobody in Hollywood sees this as a provocation to try to raise the bar in a new “Hangover” type picture); having done so, I eagerly await “Wetlands” becoming the hot new date movie among young, daring cinephiles. 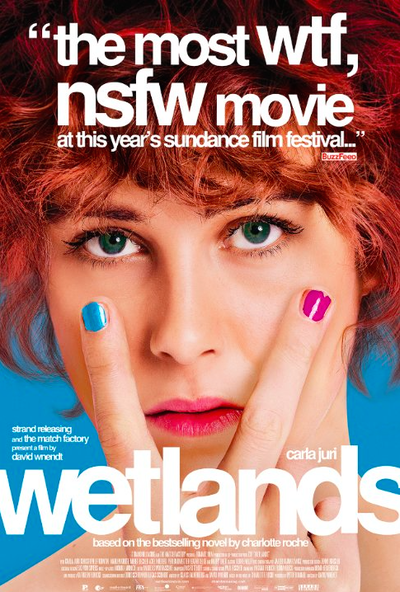