Steven Spielberg’s eloquent and graceful “West Side Story” opens with the familiar image of the Jets prowling across New York City. They toss paint cans to one another, gathering in larger numbers as they slink and slide through the streets. Occasionally, their strides break into a dance move—a spin or a slide across the pavement—always in unison. It’s almost as if they can’t help it, as if they need to express themselves through movement. Much of “West Side Story” is about that need, that sense of something under the surface that just has to escape—restlessness, passion, anger, displacement—the sense that “something’s coming” that so many people feel when they’re young. Immediately, one can feel the craftsmanship of this restaging of the classic Broadway smash. The camera doesn’t just capture action on a set—it glides with the performers, and we glide along with them. The editing avoids the choppy rhythms of so many recent musicals, allowing viewers to feel motion and connection. We are instantly hooked and will be for the next 2.5 hours.

Fans of the original stage production and beloved film will argue over the need for a 2021 version of “West Side Story,” although restaging a classic play is an annual event in major theaters around the world. For some reason, remakes in film are more often seen as attempts to supplant an original whereas theater goers are accustomed to the process of new voices interpreting classic texts. The new voices here are those of absolute geniuses, including Spielberg, writer Tony Kushner (Angels in America), cinematographer Janusz Kaminski, choreographer Justin Peck, and a stunning ensemble of new voices and talented veterans. Kushner and Spielberg have stayed loyal to the play and original film while also making notable changes in a way that makes it fresh and vibrant. And they have staged their production in a way that’s often mesmerizing. One misguided casting decision holds it back from absolute greatness but there are so many breathtaking, perfect sequences in this “West Side Story” that I suspect it will do what the original did for a lot of people, including this critic who was raised on movie musicals—make them a fan of the entire genre.

The opening sequence sets up the rivalry between the Jets and the Sharks. The former group of tough-talking New Yawkers is led by Riff (Mike Faist, giving one of several star-making performances in the film), who is tired of the Sharks taking the city that he thinks belongs to him. Leading the Puerto Rican Sharks is Bernardo (David Alvarez), a boxer who isn’t about to give an inch to anyone and who warns his sister Maria (Rachel Zegler) to never even look at a “gringo.” That doesn’t last long. Maria, Bernardo, and his partner Anita (Ariana DeBose) go to a dance that night where Maria catches the eye of Tony (Ansel Elgort), a former Jet who is trying to go straight. Just released from prison after nearly killing a guy, Tony lives in the basement of the store in which he works, watched over by a mother figure named Valentina (a transcendent Rita Moreno, who won an Oscar for the first film and could do so again).

Of course, anyone even vaguely familiar with the Shakespeare-inspired original knows that this New York Romeo falls hard for his Puerto Rican Juliet. And yet Spielberg and Kushner find new notes to hit in a musical that many know by heart. The changes are not superficial but feel like elements that are being pulled out of the original in a way that 2021 audiences will see differently than those did in 1961, including enriching the immigrant narrative at the center of this piece. Characters like Maria, Bernardo, and Anita have a rich back story that the original never allowed, and Spielberg also allows his historian side to influence the take, opening the film with a shot of the Lincoln Center for the Performing Arts under construction—a job that historically pushed immigrant communities out of that part of the city. So much of “West Side Story” takes place against a backdrop of crumbling facades or under the shadow of a wrecking ball. It’s a glorious symbol of not only a time when the city and country were changing but how it reflects the incomplete nature of these young people looking for their lives to be built.

In terms of performance, “West Side Story” make instant stars of at least three people: Mike Faist, Ariana DeBose, and Rachel Zegler. Of course, theatre fans don’t need an introduction to DeBose, a Tony nominee who was in the original production of Hamilton. As anyone who knows the original can tell you, DeBose gets the showstopper in “America,” and it is one of the cinematic highlights of the year. Spielberg and Kushner pull the number down from the rooftops, sending Anita and her friends through the streets, dancing and singing with such passion that you can sense it through the camera. Spielberg and Kaminski’s staging here is stunning, moving so gracefully around the performers in a way that’s never distracting but only designed to make sure you don’t miss a thing. The camerawork incorporates a little too much lens flare but it’s the framing and fluidity that make it exemplary.

Faist and Zegler also find that well of passion that Riff and Maria need. On the other hand, Elgort rarely feels like he’s on the same page. These characters need to be almost jittery with the adrenalin of youth—an uncontrollable feeling that leads them to dance, to love, to fight. Everyone gets that but Elgort. He’s a blank slate in the first half, brought slightly to life by the melodrama but never enough to stop the thoughts of what could have been with a performer who better understood Tony’s desperation. He’s caught between friendship and love, knowing that giving into either could send him back to jail or worse. Elgort never conveys those stakes.

Luckily, everything around him does. Faist finds a remarkable vulnerability in Riff; Zegler makes you believe that love has her feeling pretty; Alvarez nails the over-protective nature of men who go too far; DeBose has arguably the largest range from “America” to the end of Anita’s tragic arc. And then there’s Rita Moreno. When I realized a moment that she was about to have in terms of one of the original songs from the show, I gasped. She grounds the final act of the film in a way that it really needs.

There’s so much beauty in this “West Side Story.” It merges things that have truly shaped pop culture from the graceful precision of Spielberg—who has always had a musical director’s eye in terms of how he choreographs his scenes—to the masterful songwriting of Stephen Sondheim and Leonard Bernstein to the brilliant writing of Tony Kushner to the immigrant experience in this country. It grabs you from the very beginning and takes you there. Somehow, someday, somewhere. 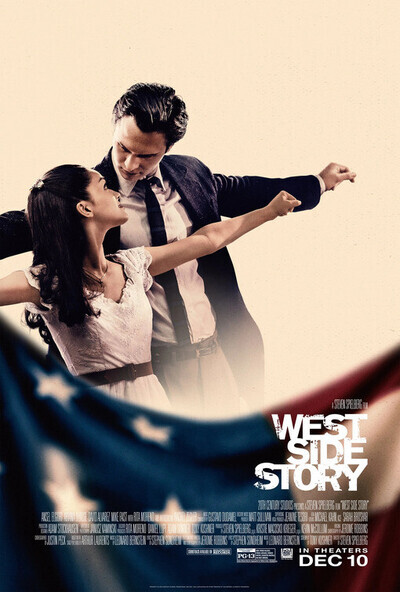 Writer (based on the stage play, book by)