The opening scene of “Welcome to Happiness” suggests a far more intriguing film than what follows. None of the bewildering developments that occur are explained, yet there’s tangible nuance beneath each exchange. Woody (Kyle Gallner), a young children’s author, is sitting in his apartment when his printer suddenly pops out a page of questions. A knock on the door quickly follows, and a woman (Bess Rous) enters. She doesn’t have a clue why she’s there. A seemingly random series of coincidences have led her to Woody, and he is surprisingly tender in welcoming her. He appears to have gone through this before. After asking her vague questions such as “Do you or don’t you?”, he performs a magic trick with a rock before guiding her to his closet. He pulls aside the hanging clothes to reveal a door that he promises will open for her once it’s ready. After he leaves, a light emanating from the door illuminates the woman’s face. It’s not long before Woody finds himself alone, once again, in the apartment.

What makes this scene work, above all, is the performance by Rous, who is entirely believable as a lost soul harboring inner pain that she masks with the saddest of smiles. It’s clear that she faced some sort of trauma in her past, and has been unable to fully grapple with it. You understand why she goes along with Woody’s bizarre requests in the same way that people communicate with the deceased through the spiritual assistance of mediums. Regardless of whether or not mediums are phony, their words bring a sense of catharsis and closure to those willing to believe them. There’s something a touch smarmy about Gallner’s performance in these early scenes that made me assume Woody was some sort of scrappy guru. Yet we soon learn that he’s as baffled as anyone else about everything he’s required to do for these strangers. He’s simply following the orders of his stern landlord (Nick Offerman). I suppose a guy will do anything for affordable rent these days.

The irony is that as Gallner’s performance gets stronger, the film around him grows weaker. As a debut feature from writer/director Oliver Thompson, “Welcome to Happiness” has numerous promising elements, yet they never quite coalesce into a satisfying whole. The biggest problem is Thompson’s forced attempts at whimsy that prevent the film from delving into the turbulent crises of his characters. The movie's aggressively upbeat tone, accentuated by a wholly intrusive score, consistently struck me as false, though this may have been in part because most of the script’s attempts at humor fell flat. I’m still trying to figure out why Keegan-Michael Key is in this movie. His role is a thankless one at best, though he does have an admittedly amusing moment where he finds himself overcome with laughter while looking at a sketch of a swimming cat. Whether this scene led Key to make the kitty comedy “Keanu” remains one of the film’s only lingering mysteries.

Whereas the first half of “Welcome to Happiness” is needlessly convoluted, the second half becomes increasingly simplistic with each successive scene. Without giving away any particulars, allow me to say that the big reveal of what lies beyond the door in Woody’s closet is not worth the wait. Imagine an awkwardly choreographed “Kumbaya” session crossed with the interminable climactic monologue from “The Matrix Reloaded” as enacted by the cast of “Downton Abbey.” That roughly approximates the therapeutic gobbledygook that allegedly brings various damaged characters a newfound enlightenment, with a message that essentially boils down to, “Everything happens for a reason, so get over it.” Such advice is insultingly pat for people like Nyles (Brendan Sexton III), who recounts his agonizing memory of a botched robbery that left two innocent people dead. Is he really just supposed to “move on” from that sort of guilt? Michel Gondry’s great “Eternal Sunshine of the Spotless Mind” dealt far more honestly with the hard truth that when bad experiences are erased from one’s life, the good experiences go right along with them, as well as any personal growth that occurred from overcoming them.

The best scene in the movie—next to the first one, of course—takes place when Woody tries to help a woman (Chauntal Lewis) who lost a hand in an accident. He believes the door in his closet will open for her, since it supposedly leads to a portal where people can correct past missteps in their lives. Yet what he doesn’t realize is that the woman has already come to terms with her circumstances, and that the door will only welcome those who have lost all hope. A later scene plays like a blatant variation on the Parable of the Prodigal Son, as Woody finally confronts his landlord …emphasis on lord, considering his name is Moses. “I did everything you asked!” he cries, demanding why “junkies and prostitutes” are chosen to enter the door, but not him. One wishes the film spent more time exploring his struggles with depression, rather than patching his emotional scars with flimsy Band-Aids. Every plot thread is resolved in the neatest way possible, even the one involving Woody’s love interest Trudy (Olivia Thirlby), who spends the whole movie storming off before materializing again as if all red flags had been forgotten. The very last moment of the film is so cute that you might not mind how—like so much else in “Welcome to Happiness”—it reeks of denial. 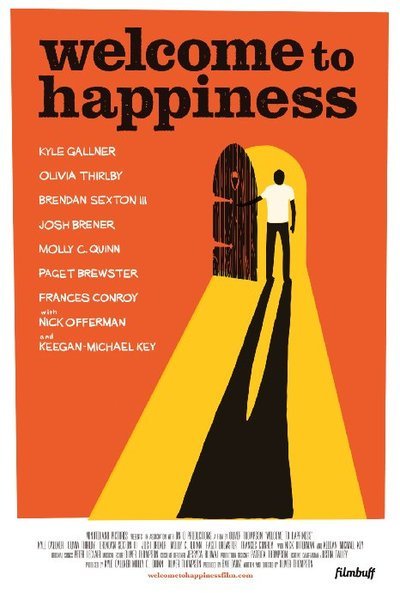