“Keanu” is a pure pop confection that delights even as it proves to be wildly uneven. This big screen debut of comedic powerhouses Keegan-Michael Key and Jordan Peele as leading men highlights many of their greatest strengths, as they bounce between personas, voices, and different physicality with ease. The premise gives them the opportunity to play uptight and loose, milquetoast black men and outlandish thug stereotypes sometimes in the same scene. Their striking differences and chemistry as comedians give the film its ragged energy. But "Keanu," directed by Peter Atencio, only provides you exactly what you expect and nothing more. In many ways, it plays like a less subversive sketch from the duos magnificent, defunct show “Key and Peele," been ballooned to 98 minutes—the film’s greatest problem.

Rell (Jordan Peele) fills his empty days after a breakup with excessive weed smoking and morose lounging on his couch, surrounded by posters of films like “Heat” and “New Jack City.” When a kitten finds its way to his doorstep after escaping a crazed shootout at a drug running facility, Rell’s life finds purpose again. Soon, Rell’s grief gives way to a near-obsession with Keanu, as observed by his cousin Clarence (Keegan-Michael Key). When Keanu is kidnapped by powerful drug kingpin Cheddar (Method Man), the duo adopt the identities of the mysterious Allentown assassins they’re mistaken for in order to get close enough to get Keanu back.

“Keanu” essentially plays with the same few jokes over and over. Some of them work, like the sheer ridiculousness of every man that comes in contact with Keanu falling in love with him, the calendar that Rell shoots of Keanu reenacting various iconic films or watching Keanu bounce between moments of excessive brutality unscathed. Others, like the continual referencing of George Michael, are run into the ground. What proves to be infuriating about the film are the more fascinating avenues it chooses not to take. For example, Rell's weed dealer, Hulka (Will Forte) is a less bombastic, unrefined version of rapper Riff Raff. The various ways he adopts black culture, stylistically and verbally, are milked for maximum amount of humor while sidestepping the uncomfortable politics inherent in doing so.

One of the best aspects of “Key and Peele” was the show’s ability to produce full body laughter while grappling with the uncomfortable ideas of black identity in American culture. “Keanu” flirts with these ideas very briefly. The act of code switching is something every black person experiences on some level. The dramatic divide between how we speak when we’re at work, for example, versus the communal language of Ebonics (or African-American Vernacular English, depending on the circles you run in) around other black people is touched on. Clarence’s discomfort with taking on that guise to get Keanu back gives the film one of its few moments when it addresses the racial politics inherent in the masquerade. There’s also a very fascinating scene involving Clarence somehow able to convince Cheddar’s group of criminals of the merit of George Michael, which leads to them bonding more profoundly than expected. Under the surface of seeing these hardened drug dealers sing along to George Michael are questions about the nature of the emotional walls black men sometimes put up because of a culture that demands them to. This nods to a thematic vein dealing with the expectations of black masculinity and vulnerability, even if the script written by Peele and Alex Rubens doesn’t tap into it enough.

“Keanu” gets the braggadocio about the act the duo puts on, but the humor has a sort of weightlessness because there isn’t much thought behind it. Rell and Clarence may be more down-to-earth than the criminals they face, but they’re just as dishonest with themselves about their own emotional landscapes. That this fact isn’t grappled with all that much is an incredible failing of the film. The emotional aspects of the narrative are dropped in favor of displaying another visually bold, slow motion action sequence or reflecting on Keanu’s cuteness. We don’t see enough of Clarence and Rell’s personal lives for the film’s conclusion to work beyond being simply funny.

Atencio's film also fails its most important female characters. Clarence’s relationship with his family, particularly his wife, Hannah (Nia Long), isn’t explored well enough for the ending of the film to feel earned. As Hannah, Long is warm, funny, and has great chemistry with Key when the filmmakers remember she exists. Cheddar’s second-in-command, Hi-C (Tiffany Haddish) is given more to do. Whenever she’s on-screen the film lights up. She authentically plays tough, street smart, and a brand of sexiness that is rooted in her own swagger more than any sort of rote objectification. But like Nia Long, Haddish isn’t woven through the film properly enough for the last minute twist and her budding relationship with Rell to completely work. And a cameo by Anna Faris, playing a doped-up, aggressive version of herself, runs far too long.

As Clarence and Rell’s masquerade unravels, so does the film, even if its core remains so sweet and tender it’s hard not to love. There is still a lot of worthwhile humor and even a few good scenes in the last half, but the messy structure works against its potential greatness. At key points, the film seems to actually be referencing another Keanu in the Keanu Reeves film, “John Wick.” “Keanu” could use some of the clever world building and strong emotional core that elevates “John Wick” beyond just being an impressively choreographed and shot action flick. Without these qualities, “Keanu” is fun, and even sometimes outright hilarious, but it doesn’t live up to the skills of its central performers. 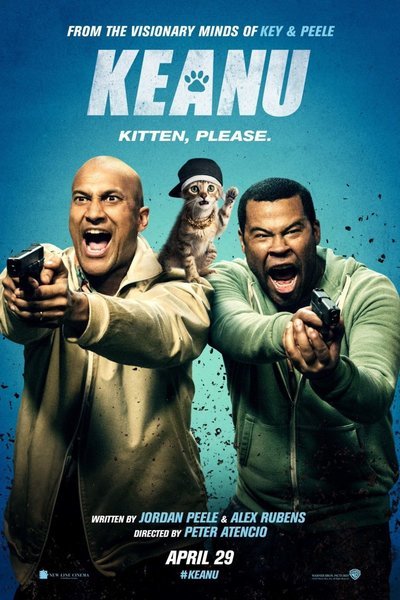 Rated R for violence, language throughout, drug use and sexuality/nudity.

Will Forte as Hulka