Venom: Let There Be Carnage

“Venom: Let There Be Carnage” is many things: a blockbuster comic-book sequel, a mismatched-buddy comedy, an opportunity for some gloriously self-aware overacting. But at its core, beneath the wacky quips and gnashing teeth and gobs of goo, it’s something else entirely: a love story. Not between Tom Hardy’s Eddie Brock and Michelle Williams as the one who got away, not even between Woody Harrelson’s villainous Carnage and Naomie Harris’ misunderstood mutant Shriek, but rather between Eddie and the hulking symbiote dwelling within him, Venom.

They may tell themselves they’ve achieved an uneasy détente since the original “Venom” from 2018. They may get testy with each other and argue over who’s really in charge. But eventually, surprisingly, they reveal a genuine, emotional connection as they come to the shared realization that they’re actually better together.

This is not a spoiler! Video messages before a recent screening from Hardy and director Andy Serkis admonished us all not to divulge any juicy revelations (which, come on Sony, we as journalists wouldn’t do anyway). However, you must stay through the credits, because some truly mind-blowing developments occur that you’ll definitely want to see.

It may sound insane to ponder notions like vulnerability and tenderness given that we’re talking about a movie in which a preening alien lives inside an intrepid reporter, bickering and bantering with him in the growl of a diabolical Cookie Monster (also Hardy, having a ball). Sure, Venom is constantly grousing about how he doesn’t get to bust out enough and eat people, and that a diet of chickens and chocolate provides insufficient sustenance. He’s often the voice of Eddie’s fears and insecurities (“Just leave me alone, you’re always nitpicking!” Eddie complains), but he’s also Eddie’s chief cheerleader, encouraging him to reconcile with Williams’ Anne, who’s now engaged to the far more suitable Dr. Dan Lewis (Reid Scott). He is the little voice inside all of us, writ large.

But silliness was the first film’s strength, which everyone involved seems to have realized and leaned into hard for the follow-up. The character of Carnage literally bellows: “Let ... there ... be ... Carnage!” at which point viewers around the world will have to take a drink. Under director Serkis, taking over for Ruben Fleischer, “Venom: Let There Be Carnage” is zippy and breezy. It’s not about the world ending, as is so often the case in comic-book extravaganzas, and it’s only sort of about one man’s struggle with his own literal and figurative demons. Besides giving a gung-ho physical performance, Hardy shares story-by credit with returning screenwriter Kelly Marcel—who, by the way, was wise enough to mine “Fifty Shades of Grey” for its inherent, absurd humor. While the bondage gear here may seem appropriate, “Venom” offers a very different kind of complicated, intimate relationship.

This time, Eddie has a chance to reign supreme once again over San Francisco journalism (such a quaint notion, that people actually read newspapers and follow specific reporters) by securing an interview with convicted killer Cletus Kasady (a scenery-chewing Harrelson), who’s about to be executed at San Quentin State Prison. But because Eddie’s reporting led to Cletus’ lethal injection, a physical clash occurs between the two men that includes some bloodshed—and the transfer of a few drops of symbiote material. As if we needed more reasons to stay six feet apart.

Cletus’ transformation into the red-hued Carnage—a larger, fiercer, and more weaponized version of Venom—is a frenzy of sound and fury. It’s also the first sign that the action in this sequel isn’t going to be nearly as compelling as the comedy. But at least you can actually see what’s happening more clearly than you could in the original film, thanks to the work of Robert Richardson, a three-time Oscar winner and Martin Scorsese’s frequent cinematographer (“Casino,” “The Aviator,” “Shine a Light”). The first “Venom” also featured the work of a true artist in Matthew Libatique, but so many of those giant set pieces took place in the dark, at night, that it was often hard to tell who was doing what to whom. Here, it still gets a tad murky—particularly during a nighttime showdown outside a school for troubled children—but overall, the action is vivid. (Richardson is also an amusing choice, given Scorsese’s scandalous comments about whether Marvel movies are cinema. The director of photography apparently thinks they are.)

There’s never a moment or sequence in which Cletus marvels at his shocking, newfound abilities, which seems like a missing piece. Rather, he immediately wears Carnage around like a tailor-made suit, as if he were born that way. And his first order of business is to retrieve the woman he loves from a high-tech lock-up, Harris’ Frances Barrison, better known as Shriek for her ear-splitting vocal abilities. In a clever twist, such startlingly loud noises also weaken Venom and Carnage—although for some reason, the two symbiotes can howl at each other during battle like kaiju stomping across Tokyo and that doesn’t harm them. Maybe it’s a different pitch or frequency or something. Regardless, Cletus’ reunion with the woman he’s loved since childhood, as we see in a flashback, is never as interesting as the repercussions of Eddie’s ever-changing relationship with Venom. The film’s highlight is Venom’s solo trip to a Halloween rave, where he’s the hit of the party in what everyone assumes is an elaborate costume. There’s also a fantastic, smaller bit involving convenience store owner Mrs. Chen, played with expert timing and technique by Peggy Lu.

But what both of these scenes reveal is the softer, sweeter side of this symbiote, and the unexpected affect he’s had on people beyond just Eddie. They hit harder than the grandiose moments in which the giant black and red blobs hurl themselves at each other in mid-air. But don’t get too comfortable with the idea of a cuddly, cozy Venom. As the end credits remind us, there are always more movies in store. 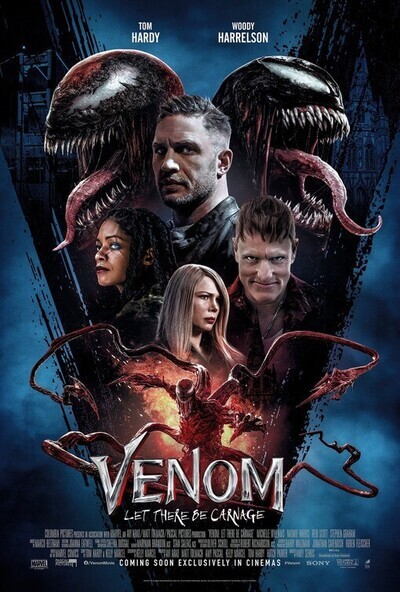