Valerian and the City of a Thousand Planets

Every summer movie season needs at least one out-of-left-field entry that is so cheerfully bonkers it stands as a living rebuke to an industry that churns out noisy and soulless garbage like “Transformers: The Last Knight.” This year, that film is “Valerian and the City of a Thousand Planets,” a deliriously entertaining film that finds writer/director Luc Besson swinging for the fences in his efforts to make a weirdo sci-fi epic for the ages and coming up with a virtual home run derby. It's a film filled with humor, charm, excitement and so many memorable images that many viewers will find themselves struggling to keep from blinking so as not to miss any of the eye-popping delights crammed into each overstuffed frame.

The film is inspired by Valerian and Laureline, a French comic book series created by Pierre Christin and Jean-Claude Mezieres that is said, especially among European comic book buffs, to have influenced the look of any number of films over the years, including “Star Wars.” The comics also helped to instill an interest in the genre in a ten-year-old Besson, who would eventually go on to employ Mezieres to help design the look of his own elaborate sci-fi epic, “The Fifth Element.” Besson may be one of the leading players on the international moviemaking scene, but while watching “Valerian,” he has reverted, in the best possible way, to the mindset of a kid helplessly enthralled by the wild plotting, bizarre alien worlds and breathless derring-do on display—albeit a kid who has been able to marshal together armies of cutting-edge visual technicians and a near-$200 million budget (the largest in French film history) to bring it all to life exactly as it played in his head.

Set in the 28th century, the film centers on Valerian (Dane DeHaan) and Laureline (Cara Delevingne), a pair of special operatives fighting crime throughout the universe. As the story begins, the two are sent off to Big Market, a virtual-reality bazaar whose hordes of vendors can only be seen and approached after donning special equipment, to confiscate an ultra-rare and powerful Mül Converter, an adorable creature capable of reproducing anything that it eats. The cocky Valerian soon finds himself being pursued by any number of creatures while the far more cool and collected Laureline is charged with saving his bacon, presumably not for the first time.

The twist this time is that, due to a technological malfunction, Valerian is also trapped between two different levels of reality with most of his body in the real world while his arm is stuck in the virtual universe. This may not make a lot of sense in the explanation but the end result on the screen is a hilarious and exciting thing of crackpot beauty that is just one high point of a film filled with them.

After securing the Mül Converter, Valerian and Laureline report to Alpha, a massive floating city that began centuries earlier as the International Space Station and has expanded over the years to serve as a home away from home for aliens from throughout the universe to live together in harmony. Now Alpha’s very existence is being threatened from within, and Valerian and Laureline are charged with getting to the bottom of things before it is too late. The two uncover evidence of a massive government conspiracy to cover up a ghastly mistake. As they try to unravel the scheme before all is lost, the two are separated and have a series of adventures involving a wild collection of creatures, the most memorable of which is a shape-shifting “glampod” played by pop princess Rihanna, who turns up to help Valerian rescue Laureline.

Besson has long been one of the most stylish filmmakers, but he outdoes himself here. There is not a scene in the film that does not contain a visual worth savoring, whether it is an unusual creature, an extravagant costume or just a throwaway oddity lurking in a corner. (This is one of the rare recent films in which the 3-D option is clearly the way to go.) At the same time, though, Besson is using his visual skills as a way of telling the story instead of merely serving up bits of gourmet eye candy. Take the extended early sequence set on a bucolic distant planet whose sleek and iridescent inhabitants go about their business before being interrupted by a cataclysmic event. The scene is an initial grabber because of the absolutely gorgeous design of the planet and its inhabitants. But as it goes on, we quickly get a sense of who they are in relation to each other and how their world functions without a single word of dialogue to explain any of it.

Some will complain that the screenplay is little more than a series of action sequences linked together by a story that doesn’t make any sense and absurdly clunky dialogue. While some of the criticisms are valid—there are times when the dialogue sounds as if it underwent one pass too many through translation software programmed by George Lucas—Besson’s narrative is more ambitious than usual this time around and, for all the silliness on display, ultimately touches on real-world concerns such as political corruption and the international refugee crisis in ways that lend real emotional weight to the proceedings. At the same time, “Valerian” is unusually optimistic in its depiction of the future from the charming prologue showing the evolution of Alpha to the sight of its inhabitants living together in peace. At a time when virtually every futuristic film envisions some form of dystopian nightmare, the sunnier take shown here is refreshing.

The only weak element to “Valerian and the City of a Thousand Planets,” ironically enough, is Valerian himself. Throughout his career, Besson has never shown much interest in telling stories based around conventionally masculine heroes. Most of his films have centered on tough and resourceful female characters, and when guys have been front-and-center, Besson has subverted their macho natures in some way (such as dressing Bruce Willis in Jean-Paul Gaultier in “The Fifth Element”). Here, Valerian should be brave, bold and resourceful, but as inhabited by DeHaan, he comes across more like a callow kid struggling to emulate the effortless cool of Han Solo. Besson is clearly more interested in the character of Laureline, and viewers will be, too, thanks to Delevingne's performance. She is funny, convincing in the fight scenes, charismatic as hell, and capable of taking an absurdly melodramatic speech like her climactic oratory on the importance of love and making it work. Thanks to films like “Wonder Woman” and the recent “Star Wars” entries, we are in a new age of exemplary female heroes at the multiplex, and Laureline is fully deserving of a place among them.

“Valerian and the City of a Thousand Planets” is an utter delight and one of the most gorgeous fantasies to hit the screen in recent memory—the kind of film that can take moviegoers logy from the usual array of craptaculars and render them giddy with its pure fun. The question, of course, is whether viewers will be willing to give its weirdo charms a chance. But if you want to come away from a film feeling dazzled instead of simply dazed, this is an absolute must. Besides, it is almost certainly going to become a cult favorite in a few years, so why not get in on the ground floor while you can? 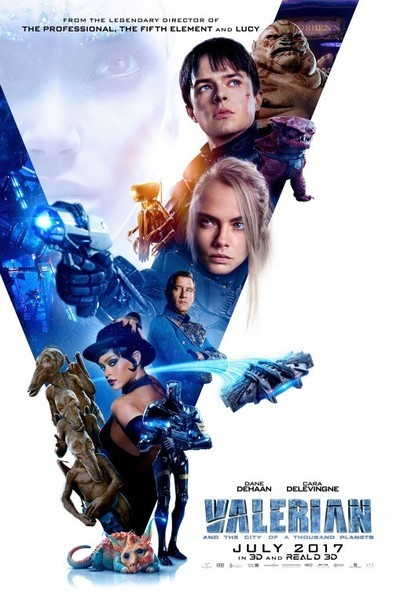 Valerian and the City of a Thousand Planets (2017)

Ethan Hawke as Jolly the Pimp