“Transformers: The Last Knight” opens and closes with chaos. The first scene features bodies flying everywhere as flames pierce the sky in Michael Bay’s reimagining of the Knights of the Round Table, in which Merlin’s magic is a gift from the alien robots so many know and love. The last scenes, and this is no spoiler if you’ve ever seen a Michael Bay movie, feature bodies flying everywhere as metal and flames pierce the sky. In between, there’s a bit of mythology, some running and screaming, a ton of slo-mo, a dash of racism, a great actor wasted in a character who could have been named “Exposition Dump,” and so much incoherent noise that you’ll want to bang your head on the seat in front of you just to get some rest.

After two sequels that took the fun spirit of the “Transformers” and turned them into something with the artistic depth of a Monster Energy Drink, Bay appeared to reboot the franchise with the relatively solid “Transformers: Age of Extinction.” He found one of our most charismatic leading men in Mark Wahlberg, gave him an awesomely perfect name like Cade Yeager, filled out a better-than-average supporting cast, and provided major set pieces across the world, including leveling a bit more destruction at Chicago. “AoE” suffered from Bay Bloat (165 minutes!) and some of the other technical problems of the previous sequels, but it offered hope.

Hope dies during "Transformers: The Last Knight." From the very beginning, this is an incoherent mess. Cade’s daughter and her boyfriend—both memorable characters from the last film—are gone, the daughter written off with a couple of horrendously manipulative beats about her being at college and Yeager being on the run. He can save the world but he can’t see his daughter. Whatever, fine, but also gone are Stanley Tucci (other than a brief cameo as Merlin in the opening scenes) and Kelsey Grammer. The villains of the first film are replaced here by a purely CGI enemy named Quintessa (Gemma Chan), an interstellar being who wants to use the home planet of the Transformers to destroy Earth by basically crashing them into one another. She’s such a cartoonish, poorly designed villain that she never feels like a real threat.

I’m getting ahead of myself. “The Last Knight” picks up relatively where the last film left off. Optimus Prime is headed back to his home planet to tell the universe to leave Earth alone. Yeager is now in hiding, as being a massive alien robot is still against international law, and he's still aligned with the remaining Autobots. He’s “in hiding” in the biggest auto field in the Midwest, but those kind of logical leaps are easy to let slide in a summer blockbuster when it’s working. He has a new assistant (Jerrod Carmichael), is working on repairing Bumblebee, and gets a spunky preteen sidekick who feels like the character sitcoms used to add late in their run when everyone knew the original kids got too old (think Sam on “Diff'rent Strokes”). And then pretty much all of the set-up—including any sort of immigration analogy about the fear of foreigners represented by the hunted Transformers—is thrown out. There’s a point in the script when you can literally tell when it was handed to a different writing crew. It starts as one movie and then, bizarrely, takes a hard-right turn to England and becomes something else entirely.

You see, Yeager found a talisman on a dying transformer, and that relic ties him to the long and storied history of the aliens. As these films have grown in budget, Bay has piled on more and more mythology, and I think the reason this is billed as the final chapter is because there’s literally nowhere else to go. Through remarkably expository scenes courtesy of Sir Anthony Hopkins and John Turturro, we learn that people have known about the Transformers for centuries and that notable geniuses like Mozart and FDR helped keep their existence a secret. In return, the robots gave the human race gifts, including the Transformer watch that killed Hitler. No, I’m not making that up.

Weaving the mythology of these killer cars into world history isn’t a bad idea, and reflects the tongue-in-cheek pleasure these movies could have been (I’d watch the heck out of “Bumblebee vs. The Third Reich”) but it’s all so thinly and poorly handled here. Before you can truly enjoy it, we’re back with the revelation that Cade now has a connection with the Transformers (because of the talisman and because of some other nonsense I couldn’t begin to explain) and his new gorgeous friend Vivian (Laura Haddock) is the only one who can wield Merlin’s staff, a necessary skill to save the Earth.

You’re saying, “How could a movie that weaves together metal dragons, Merlin’s staff, Sir Anthony Hopkins and world-killing aliens be all that bad?” Because it’s just not fun. More than any film Bay has made, "The Last Knight" is incoherent to the point of parody. Action scenes are poorly choreographed, dialogue is weaker than ever, and plot twists make no sense. At one point, the leads are on a submarine and I couldn’t for the life of me tell you why. Not only is it transparent that no one involved bothered with the plot—Wahlberg has never given such a lazy performance as he does here—but the editing and effects are stunningly shoddy. There’s no geography to any of the scenes, so you can’t tell what the heck is happening. At least the last film had a few action set pieces that worked and the third film had the destruction of Chicago to wow viewers. This film does not have a single memorable action sequence in it. And it starts at such a ridiculous pitch that it has nowhere to go—Yeager is reintroduced shooting a robot in slow motion. Bay has always been willing to forego things like rising action or building tension to try and blast viewers to their seats from first frame to last. But it gets so exhausting to watch another movie that starts at 11 and then never varies the volume.

Here’s where the chorus of Critic-Proof Franchises kicks in. Michael Bay made this for fans of the franchise and not the notoriously-hard-on-it critics. Diehards will ignore that I liked the first film and parts of the third and fourth films (the second is still a cinematic abomination). I get it. We love to forgive the failures of franchises we adore. Even critics do that. But even fans of this series have to take a hard look at the outright, shocking laziness of this movie—one that does the bare minimum to get butts in seats. Even in bad action movies, there’s often a glimpse of artistic potential gone awry or attempts to entertain that just didn’t work. I began to actively try to find that here, to find a way to see how this went off the rails. I came to the conclusion that no one cared. There’s just so little effort to make sense or make it interesting, even for the fans. It was a contractual obligation and a paycheck. They could have called it “Transformers: Someone Needs a New Beach House.” 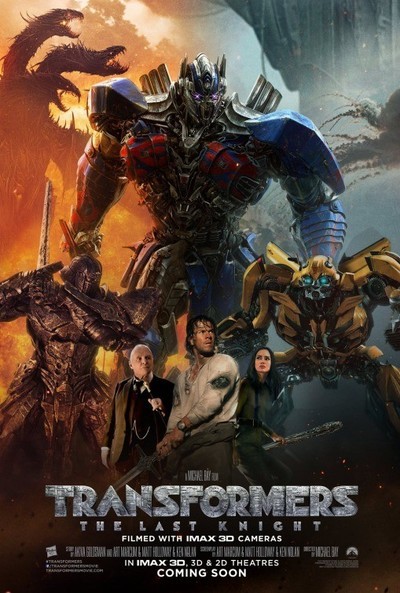 Rated PG-13 for violence and intense sequences of sci-fi action, language, and some innuendo.