Kudos to Val Kilmer, sort of, for framing "Val" as something other than a record of things that happened. The movie even invokes the idea that fiction is a lie that gets at a greater truth. It's questionable whether "Val" ultimately does that: it's frank about the star's physical deterioration and his feeling that his career was a disappointment in relation to the talent he believed he possessed. But in many other ways, it often plays like an exercise in image management, treading lightly on explosive autobiographical terrain from his adult life, but going deep on family trauma (particularly the childhood death of his brother Wesley) and tales out-of-school.

A festival sensation picked up by mini-studio A24, which has become known for stylish dramatic rawness, "Val" is edited like a deathbed flashback (or like "Listen to Me Marlon," about Marlon Brando, Kilmer's idol and one-time-only costar). The subject's life passes before his eyes in the form of film and video, a slipstream of nostalgia and regret. There are bits from from childhood home movies, Hollywood productions; the archives of Julliard (where he studied acting); assorted entertainment TV programs, electronic press kits, and DVD supplements; and Kilmer's own library of handheld camcorder and phone footage, which he's been accumulating for decades.

The star, who lost his voice to cancer, speaks through a voice-box while holding a finger over the opening of a tube embedded in his throat. In flashbacks to earlier eras, Kilmer's narration is read by his son Jack, whom he dotes on in past and present footage. Unfortunately, Kilmer steps around memoir landmines that'll be familiar to anyone who's followed his career, such as his abusive behavior on sets (including "The Island of Dr. Moreau," where he was accused of burning an assistant cameraman's face with a cigarette) and charges of cruelty and infidelity by his ex-wife, Joanne Whalley-Kilmer. There are odd moments where the vibe of the film's narration, as well as Kilmer's sly interaction with the documentary camera, make it seem as if, on top of any therapeutic value "Val" might have, he also sees the project as an extension of fan events where he signs merchandise for cash. Doing what a man with bills has gotta do—though hopefully with a touch of artistry.

The low point of the film is a montage of Kilmer's costars (including Robert Downey, Jr. and Tom Sizemore, not the most convincing allies one could enlist) endorsing Kilmer's defense that he was a perfectionist trying to make each project as good as could be. (Ask an egomaniac to name their worst flaw, and nine times out of ten they'll say, "I'm a perfectionist.") Despite circumspect editing, a lot of the footage from Kilmer's '80s and '90s phase makes it seem as if he and other (mostly male) costars were entitled and sometimes drug-addled assholes who couldn't get outside themselves and understand how obnoxious they were, much less how their behavior was hurting the production and angering their collaborators.

Kilmer even defends Brando's "creative process" on "The Island of Dr. Moreau," which—according to a member of the production team who was present for the entire filming—relied on cue cards and the use of body doubles (one of which appears briefly in "Val"), and limited the legendary actor's participation to four hours a day, with the journey to and from Brando's hotel eating up two of those hours. If "Val" co-directors Leo Scott and Ting Poo were attempting a "seeing through the unreliable narrator" effect, it didn't come across. Rather than express regret or remorse at his excesses, Kilmer seems to have decided that anything that went wrong on a set was the fault of small-minded people standing in the way of his genius. Rather than be disillusioned by Brando's proud display of slovenly arrogance, he seems to view it as the fulfillment of an artistic fantasy.

A scene of "Moreau" director John Frankenheimer tearing into Kilmer for his arrogance plays out mostly as captions over a black screen, Kilmer having set the camera down at Frankenheimer's orders after the director repeatedly warned him that he didn't want him shooting a personal documentary on a professional set. Like so many scenes in "Val," it's hard to tell if the footage is being presented in the name of warts-and-all honesty or because Kilmer believes the clips vindicate him.

With hindsight—and rather incredibly—it seems like the latter, though Kilmer is so wounded by his illness, treatments, and surgeries that any obstinance that comes through is undercut by our awareness of how frail he is, how vulnerable to sickness and injury. The film's most wrenching scene is a long, unedited, stationary shot of Kilmer seated at a card table at a fan convention, signing autograph after autograph until he feels queasy and has to excuse himself. He then rises unsteadily to his feet, plops down an out-of-focus sofa in the background of the shot, and pukes into a trash can (the sound is muted, perhaps to allow Kilmer one shred of dignity).

In narration, Kilmer chastises other actors, and by extension himself, for trying to live off the past in this way. But this is one instance where he's being harder on himself than he should be. After turning 50, even male leads’ options start to dry up, so who can blame someone of Kilmer's stature from trying to profit off the fact that he was in "Top Secret!", "Top Gun," "The Doors," "Batman Forever," "Tombstone," and other '80s and '90s touchstones? He seems angry at himself for not being indestructible. It's hard to completely despise a prodigy who's been beaten up this badly by life, especially when we see so much footage of his adult children interacting with him in the present, seeming grateful to have had him as a father.

The film is most satisfying when it's just giving us details of Kilmer's philosophy of acting, which is uncompromising to the point of being exasperating, but lively, and ultimately preferable to the default attitude of so many straight male actors who denigrate their profession as trivial, or somehow unbecoming of an adult. Quoting poets, philosophers, playwrights, and mentors who share his lofty opinion of the value of art, he presents a much-needed defense of acting as a way to help the audience understand itself, just as it helps open-minded, open-hearted actors untangle their own thoughts and feelings.

By pretending to be someone else, Kilmer’s best performances incarnated the notion of a lie that reveals a greater truth. He could be, to put it mildly, a thorny person to work with, but when you see him in a classic like "Tombstone," he's all huckleberry. 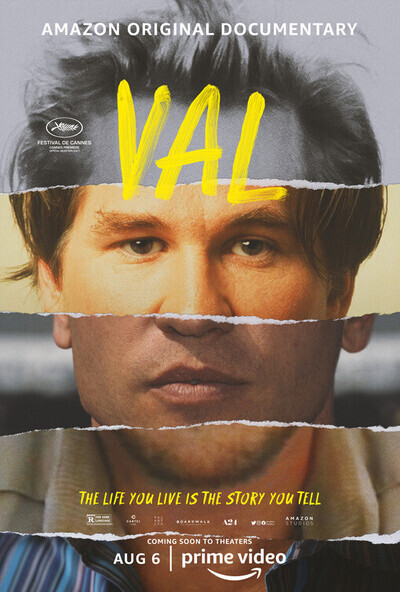 Val Kilmer as Self

Kevin Bacon as Self (archive footage)

Sean Penn as Self (archive footage)

Marlon Brando as Self (archive footage)

David Thewlis as Self (archive footage)

Kurt Russell as Self (archive footage)

Tom Cruise as Self (archive footage)