A question has been nagging at me ever since the first Batman movie, and "Batman Forever" makes it inescapable: Would Bruce Wayne continue his keen interest in crime fighting if he didn't get to wear theBatman costume? The opening scene plays like a commercial for a rubber wear shop, and throughout the movie, the dominant images are of fetishistic gear: The belt buckles, boots, gloves, capes, masks, and of course, the cute little dime-sized nipples on Batman's and Robin's chests. When Batman tries on his new prototype costume late in the movie, and there's a close-up of its gleaming buttocks, the audience chuckles knowingly.

Batman would be a sensation in any leather bar, but "Batman Forever" is at pains to show that he has heterosexual tastes. Nicole Kidman plays Dr. ChaseMeridian, who sounds like a bank, but is, in fact, a student of abnormal psychology. She's powerfully attracted to Batman the moment she meets him, and wonders what he's looking for in a woman: Would it help, she wonders, if she carried a whip? She's thrilled that Batman reads her books ("Not every girl makes a superhero's night table"), but less than thrilled when her date for the Gotham Charity Circus is boring old bachelor Bruce Wayne. Maybe the clothes do make the man.

This theme - the girl in love with the image but not the reality - is also standard in the Superman series, where Lois Lane chases the Man of Steel, but rejectsClark Kent. What's new in "Batman Forever" is that Batman himself(Val Kilmer) has to do a little seduction. At the circus, young acrobat DickGrayson (Chris O'Donnell) saves the crowd by rolling Two-Face's TNT bomb into the river. His family is killed during this process. Bruce Wayne, impressed by the orphaned young man, invites him to stay at Wayne Manor, but Dick is a rebellious motorcycle freak who wants outta there - until Wayne shows him his collection of bikes, including priceless oldHarleys and Indians. The subtexts in this scene are so deep, you have to wade through them.

The plot of the movie involves the embittered Two-Face (Tommy Lee Jones), a former district attorney who is deranged after half his face is scarred by acid. He's mean, but not brilliant. For brains, the movie provides Edward Nygma (Jim Carrey), who uses a computer program to name himself the Riddler, and who hooks up with Two-Face to steal lots of loot to finance his evil scheme.

TheRiddler's scheme is one of the more amusing aspects of "Batman Forever," considering that the movie is being distributed by Warner Bros., a division of Time Warner, which owns HBO and other cable outlets. The Riddler wants to put a copy of "The Box" on top of every TV set in Gotham.

This device is not exactly an Internet provider. It works by sucking up the brainwaves of its users, transferring them to the Riddler, whose own I.Q. expands at dizzying speed.

Although the first two Batman movies were big winners at the box office, there was a feeling after "Batman Returns" (1992) that the series had grown too dark and gloomy. Batman was a reclusive neurotic, his enemies included the deformed Penguin (raised from childhood in sewers), and the movies tried for a marriage of superheroes and film noir. That didn't work: The message of noir is that there are no heroes.

TimBurton, director of the first two brooding Batman films, steps up to producer for "Batman Forever," and the new director, Joel Schumacher, makes a generally successful effort to lighten the material. There are more clever one-liners for Alfred the butler (Michael Gough), lots of laughs for theRiddler (played by Jim Carrey like a riff on his character in "TheMask"), and even sitcom moments like the one when Alfred tells Bruce Wayne that the "young master" has run off with the car. "TheJaguar?" asks Wayne. "No, sir. The other car." The movie looks great, of course; Gotham City is a web of towering spires, bridges and expressways, planted in a swamp of despond. Boardrooms and laboratories look like German Expressionist sets, and the charity circus could come straight from Murnau's "Sunrise." There are neat gimmicks, like the Riddler's brain-wave helmet, and neat stunts, as when the Batmobile climbs straight up the side of a skyscraper. And there is a consistent visual motif: two hands clasping in a firm grip. Dick Grayson is caught in such a grip by his acrobat father during a dangerous trick, and later the shot is repeated to show thatBruce Wayne is now his surrogate father.

But somehow Batman still doesn't come alive. Val Kilmer is a completely acceptable substitute for Michael Keaton in the title role, but in all three of the movies, Batman remains shadowy and undefined. The movies exist for their villains, who this time both seem to be playing the same note; the Riddler and Two-Face alternate in overacting, until the pace grows wearying. There is no rhythm to the movie, no ebb and flow; it's all flat-out spectacle.

Is the movie better entertainment? Well, it's great bubble gum for the eyes. And younger children will be able to process it more easily (some kids were led bawling from "Batman Returns," where the PG-13 rating was a joke).

I liked the look of the movie and Schumacher's general irreverence toward the material. But the great Batman movie still remains to be made. Here is the most complex and intriguing of classic comic superheroes, inhabiting the most visually interesting world, but somehow a story hasn't been found to do him justice. A story - with a beginning, a middle and an end, and a Batman at its center who emerges as more than a collection of costumes and postures. More than ever, after this third movie, I found myself asking, Who was that masked man, anyhow? 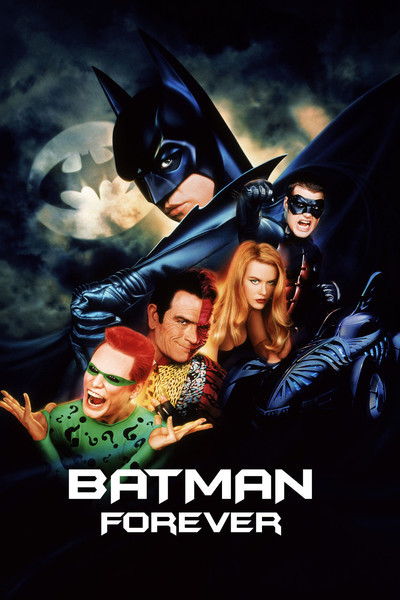