"Unpregnant" has a plot that could fuel a week of apoplectic segments on Fox News Channel. In Missouri, a 17-year-old high school student named Veronica (Haley Lu Richardson) gets pregnant by her boyfriend, despite being a conscientious condom user. She can't get an abortion in Missouri without parental consent, and her ultra-religious, abortion-opposing parents will never allow it, so she convinces her estranged childhood best friend Bailey (Barbie Ferreria) to drive her to the nearest state that will let her do it.

What follows is a hybrid of film genres that coexist uneasily at first, but reconcile about halfway through, once the story gathers speed and emotional force. "Unpregnant" is a road trip movie with a new eccentric character (and supporting performance) waiting in every town. It's also a warmhearted, often wacky teen comedy, about girls who used to be close but grew apart: Bailey is a bohemian lesbian and latchkey kid raised by a single mom, while Veronica joined a clique of popular, well-to-do, gossipy kids. As the duo drives through Oklahoma and Texas in a muscle car borrowed without Bailey's stepdad's permission, they realize the old, deep bond is still there—and that even though they move in different social universes now, they still have one crucial thing in common: they're young women struggling to make independent choices in a culturally conservative, right-wing Christian-defined part of America where men pass laws to control women's bodies.

And it's here that the film edges into a hybrid of the political satire and the social problem/message picture. As the story unreels, Veronica grows increasingly exasperated at the obstacles placed between her and her wish not to have a child before she's legally allowed to vote. She is not a reckless person. She's done everything "right," according to her upper-middle class parents' worldview. She gets excellent grades. Most of her major decisions were geared towards getting into a college and and having a career. She is monogamous, and practices birth control with her boyfriend Kevin (Alex MacNicoll), a sweet but clingy and intellectually limited guy that she never had any intention of marrying or having kids with.

And yet Veronica's punishment—either for not being abstinent, an unrealistic option for most teenagers, or accepting her unexpected pregnancy as God's immutable wish—is to be forced to secretly travel 900 miles over three states, to get to the nearest clinic that will terminate the pregnancy without notifying parents who will never allow it. Inevitably, Veronica's ire turns to conservative state legislatures that figured out they could get around the 1973 "Roe v. Wade" Supreme Court ruling allowing abortion by passing laws that functionally ban the procedure in certain US states, under the false pretense of looking out for parental rights or women's health and safety. Parental consent notification is one of them, but there are lots of others: the "admitting privileges" ploy; waiting periods; mandatory exposure to anti-abortion videos and lectures; and forced ultrasound procedures where "wands" are inserted into patients' vaginas (a process that feminist writers and activist groups have compared to sexual assault-as-punishment).

This is all a lot to fit into one movie. Beyond its complete unacceptability to any viewer who opposes the very idea of abortion—not the film's target audience, obviously—"Unpregnant" struggles with its ambition to be so many different things at the same time (five screenwriters are credited). Aspects of the film's story work well in one context (such as Veronica's political rants during the more straightforwardly dramatic scenes) but not in others. There's a tightly constructed, calculatedly outrageous sequence built around a couple of married Christian activists (Sugar Lyn Beard and "Clueless" alumnus Breckin Meyer). The action packed climax is deliriously absurd, and probably the peak for Goldenberg as a visual stylist, but it works at cross-purposes with the movie's otherwise earnest and compassionate tone.

There are also times when the film fails to capitalize on the talents of its guest actors. The routinely brilliant Giancarlo Esposito is wasted as a conspiracy-minded, government-hating limo driver who helps the girls in the final leg of the tale. Australian singer Betty Who radiates star power as a female stock car driver named Kira who flirts with Bailey and shares a brief romantic interlude with her at a fairground, but she's never granted a plot function worthy of her magnetism. That "Unpregnant" keeps contriving increasingly dumb reasons to bring back the doofus-hunk Kevin to stalk and pester the heroine, but can't figure out how to engineer return appearances by a vastly more original character like Kira, testifies to the film's inability to figure out which parts of itself are worth placing in the spotlight. (With her imperious height, close-cropped blonde hair, and knowing smile, Who is an action hero-in-waiting; maybe George Miller will read this.)

Nevertheless, the film's solid grounding in friendship and comic teamwork carries the day. "Unpregnant" becomes more affecting as it goes along thanks to the sincere, committed, and mostly unaffected lead performances by Richardson and Ferreira. They struggle at first with a dynamic that's too familiar from other teen films (notably 2019's "Booksmart," with which it awkwardly shares comic bits), but their performances grow in depth and effectiveness with each new stop along the road.

I love the way the film shows Veronica and Bailey's bond growing tighter by letting their reactions to big dramatic moments grow cooler and less extravagantly emotional. A couple of moments near the end that other movies would've milked for hugs and tears are downplayed in a way that feels true to real-life best-friendships. When you get each other as deeply as these two, you don't need every life milestone to be pumped up into a Hallmark moment. A smile or nod will do. 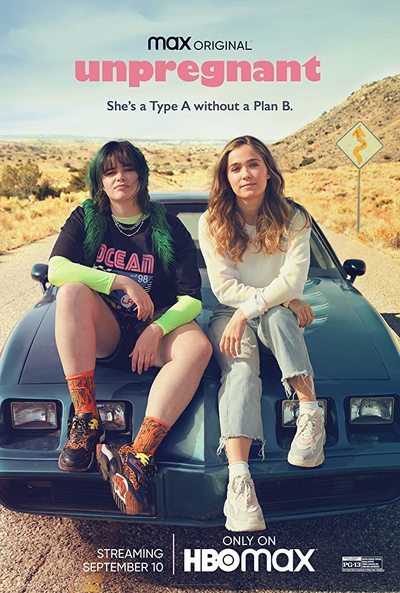 Betty Who as Kira