Olivia Wilde’s electric feature debut, “Booksmart,” is a stellar high school comedy with an A+ cast, a brilliant script loaded with witty dialogue, eye-catching cinematography, swift editing, and a danceable soundtrack. Most importantly, it’s incredibly fun to watch again and again. While paying homage to the teen comedies that have come before it, “Booksmart” sets itself apart with the characters at its center. Molly (Beanie Feldstein), a type-A bookworm obsessed with being the top of her class, and her best friend Amy (Kaitlyn Dever), a quieter if no less driven feminist activist, worked hard to get into good colleges. When Molly finds out that their less studious classmates have also gotten into the same prestigious schools, it shatters her understanding of the world. Instead of enjoying their usual quiet night in, Molly convinces Amy to dress up -– they’re going to party at least once before they walk across that graduation stage.

After helming a few music videos and shorts, Wilde has blossomed into a fully-fledged filmmaker with style and voice to spare. Her sense of humor shines through every ridiculous situation, sharp quip or a visual gag, be it poking fun at a rich kid’s pimped out ride with a license plate reading “FUK BOI” or the existence of Gigi (Billie Lourd), a character best remembered for her unprompted wild antics, mysterious ability to pop up at all of the night’s parties and her “cool girl gone eccentric” vibe. Wilde also has fun riffing on Hollywood musical tropes and creating a stop motion drug hallucination that’s almost too bizarre to describe. It’s better if you just watch and laugh your way through it.

Wilde’s acting background helped lead the cast to give both wonderfully deranged and emotionally moving performances. We ride the highs and lows of Molly and Amy’s odyssey through Los Angeles at breakneck speeds but nothing feels lost. We get a sense of their deep friendship, much like the two best friends at the center of 2007’s “Superbad.” They tease each other, they have their own shared language, like using the name Malala to ask each other for help, and rituals like over-complimenting each other’s outfits. Usually, so many names on a script would be cause for worry, but the contributions of Susanna Fogel, Emily Halpern and Sarah Haskins and a final draft by recent hit scribe Katie Silberman (“Isn’t It Romantic,” “Set It Up”) does not disappoint. When I spoke with some members of the cast and crew at South by Southwest, the actors said they felt supported by Wilde to build out their characters as they saw fit, which is likely why the high schoolers sound like kids their age talking about their chosen Harry Potter House.

Feldstein and Dever are perfectly matched to bounce off of each other’s personalities, even if their characters seem similar at first glance. Playing the best friend part in “Lady Bird,” Feldstein had limited screentime to show off her comic chops, but it was obvious that she already had great timing and hilarious exaggerated reactions. Given the spotlight in “Booksmart,” she takes her antics to 11 with a confident and determined energy for her misguided and strongwilled character. Dever makes a lot of Amy’s shy girl persona and her quiet crush on another girl. She subtly plays out Amy’s mortification at her parents’ cutesy enthusiasm, her reluctance to be honest about her feelings and her protective loyalty to Molly, even when she feels overwhelmed by her friend’s bombastic personality.

As wonderful as it was to watch a movie about strong and supportive female friendships, it was just as refreshing to see it set in a high school that’s full of diverse students, different sexual orientations and gender expressions. The supporting cast is just as wonderfully funny as the stars and is given something more to do than be the token high school stereotypes. In fact, many of Molly’s first impressions of her classmates turn out to be wrong, and while their characters may not get the full in-depth exploration, they weren’t reduced to one trait or reductive punchline.

Wilde’s film is a complete package delivered to theaters with a bow on top. The movie’s cinematography matches the teens’ wild “After Hours” adventure with dreamy yet colorful lighting. No high school party ever looked so good. There’s one scene where cinematographer Jason McCormick, who shares Wilde’s background in music videos, captures the moment Amy’s crush, Ryan (Victoria Ruesga), leans her elbow on Amy’s knee, causing time to slow and the pink and yellow party lights to saturate the karaoke room, like that moment when your heart skips a beat because someone you like acknowledges your affections. The snappy rhythm of Jamie Gross’ editing makes the girls' adventure feel like it’s flying by to the infectious beats of Gorillaz’s Dan the Automator. It’s a sensational mix that left me with an elated feeling by the time the credits rolled.

In “Booksmart,” girls just want to have fun. Put aside the pressure to succeed or live up to strict ideals and focus on what’s important: our friends. “Don’t make the same mistake I made,” warns the teens’ favorite teacher, Miss Fine (Jessica Williams), and that statement feels like a warning for the audience, too. Focusing so much on work and success has pushed generations of women to burn out. Perhaps “Booksmart” is trying to teach the next graduating class that there’s nothing wrong with balancing all that hard work with some party time. 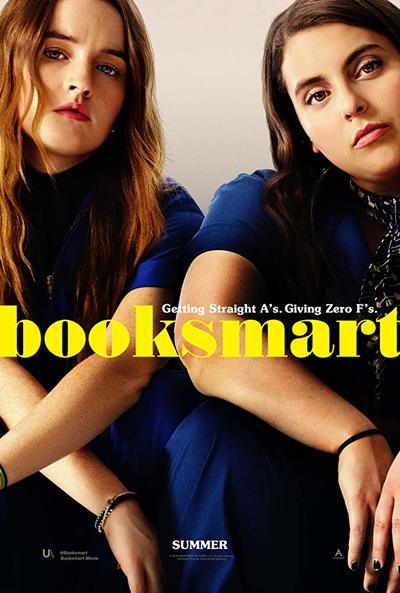 Rated R for strong sexual content and language throughout, drug use and drinking - all involving teens.

Molly Gordon as Annabelle "Triple A"

Will Forte as Amy's Father