Netflix has developed an incredibly deep catalog of true crime docuseries and they show no signs of slowing down the growth in this section of the streaming service. The success of “Making a Murderer” and “The Keepers” set a template over at Netflix and it feels like there’s something new every month week from major buzz-generators like “Tiger King” to projects like “The Innocence Files,” “Fear City,” and “The Trials of Gabriel Fernandez.” The big one—and I do mean big—for November is the sprawling, ambitious “Trial 4,” an eight-hour examination of the case of Sean Ellis, a Boston teenager convicted of the murder of a police officer named John Mulligan. The evidence strongly supports Ellis’ innocence, and the docuseries directed by Remy Burkel and executive produced by Jean-Xavier de Lestrade (who directed “The Staircase,” one of the most acclaimed true crime docuseries of all time) never really questions it for a second, using this case to as an anchor to tell a story of rampant corruption in the Boston Police Department. “Trial 4” truly takes its time allowing us to get to know Ellis and those fighting for him, and the series is at its best when its deeply empathetic side comes out. It’s too long at eight hours—there’s a stronger version that runs at least two full episodes shorter—but the best of “Trial 4” reflects on what’s lost when corruption is allowed to flourish.

Boston Detective John Mulligan was working a night shift in a Walgreen’s parking lot in 1993. An employee was walking past Mulligan’s car when he saw something horrific (the employee speaks in “Trial 4” about the trauma he still carries): the officer had been shot multiple times, mostly in the face. It was no mere robbery. It looked brutal and personal. And the officer’s gun was missing. Rumors started quickly that Mulligan’s pants were found around his ankles and that the murder looked more like an execution than a mere gun robbery. However, another murder investigation across town revealed that a teen named Sean Ellis had been in that Walgreen’s around the time of the murder with his buddy Terry Patterson. While they had no motive other than to steal a gun, Ellis and Patterson were arrested and tried. The first two trials led to deadlocked juries; the third convicted Ellis of a crime he clearly didn’t commit. “Trial 4” is about the fight for that fourth and final trial, which took over two decades.

“Trial 4” is one of the densest true crime docuseries ever made. There’s archival footage of the case, including a cop arriving on the scene, and multiple interviews with major players on both sides—although it’s telling that every episode ends with a list of who was contacted but refused to discuss the case to make sure to remind viewers of the efforts to get both sides of this story. The series focuses most of its energy on Ellis himself, following him around as he awaits trial for what everyone hopes is a final time, and works with an unforgettable attorney named Rosemary Scapicchio, who is the kind of person every wrongly convicted soul wants on their side, fearless and aggressive in her efforts to prove Sean’s innocence.

A cover-up of corruption is revealed throughout “Trial 4.” The investigating officers in the Ellis case were undeniably corrupt, investigated multiple times in the city of Boston for stealing money from people they arrested—a young man tells a story of being tied to a chair in his own apartment while they basically robbed him—and there’s significant evidence that those officers had a connection to Mulligan that needed to stay secret. Putting Ellis away meant that the corrupt network would go away too. These people paid witnesses, robbed criminals, and coerced testimony, and “Trial 4” devotes a lot of time to analyzing the entire system that allowed them to get away with it.

In the final episodes, it shifts to an equally fascinating look at Boston politics, chronicling the campaigns for the District Attorney of Boston, a position that will basically determine Sean’s fate. It’s amazing to consider how much an innocent man’s incarceration can hang on a local election, and “Trial 4” is ambitious enough to dig into the campaigns in a way that almost recalls projects like “City So Real.” But it never loses its human touch. An early scene in which Sean and his girlfriend from when he was convicted reminisce about the time that they met is heartbreaking without emphasizing how much was lost.

Clearly, there’s a lot to admire about “Trial 4,” but it suffers from a common problem in recent docuseries (looking at you, “The Vow”) in that there’s a five or six-episode version of this story that feels more urgent. The story of Sean Ellis should rage with righteous anger, but the length of this project allows that to dissipate more than it needed to. Still, I won’t forget this story, and anyone who commits eight hours of their life to it will likely feel the same. 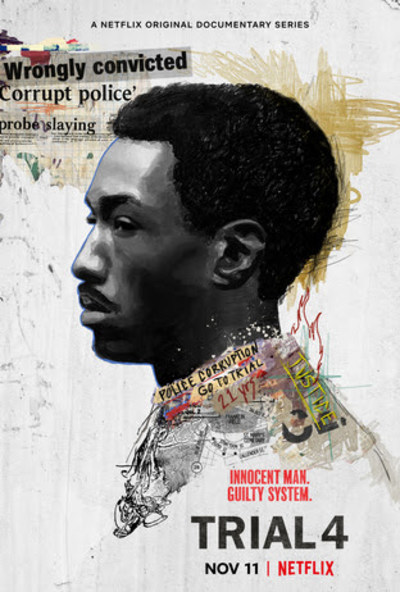