“Tiger King” is Netflix comfort food of the highest order: it immerses viewers in a mind-boggling lifestyle and series of scandals, and yet the term “true-crime” doesn’t do justice to its greatness. This is animal-print Shakespeare; a sociological excursion into the minds of eccentric Americans who are addicted to the power that comes from owning tigers, AKA big cats. Theirs is a dramatic, intricate hierarchy, and co-directors Eric Goode and Rebecca Chaiklin study its every facet. “Tiger King,” arriving on Netflix today, includes approximately five different true-crime tales (including arson, a disappearance, and an alleged murder plot), and bundles them into one obsession-ready seven-episode series. It’s the kind of story that’s rife for binging as much as extensive conversations about all the bonkers stuff that unfolds.

To top it off, after watching "Tiger King" you can get lost in the YouTube channel of the doc's main focus Joe Exotic, whose original country ditties ("Here Kitty Kitty") are used to accompany many of the miniseries' major developments. Joe Exotic is, in his own words, “A gay, gun-carrying redneck with a mullet,” and is also the owner of the G.W. Zoo in Oklahoma, where he breeds tigers for his zoos or for other owners, to the horror of animal rights activists. Joe is larger than life and fixated on fame, so much that he creates his own reality show about running the zoo. (The show's producer, Rick Kirkham, encapsulates Joe as “a mythical character living out in the middle of Bumf**k, Oklahoma, who owned 1,200 tigers and lions and bears and monkeys and sh*t.”) A lot of the amazing footage that gives “Tiger King” its big laughs and scope comes from Exotic’s consistent documentation—and a lot of these videos have been on YouTube for years.

But “Tiger King” only starts with Joe Exotic. It branches out to his workers, his two husbands, and also zoo-owning peer Bhagavan “Doc” Antle, who exercises his own god complex at his South Carolina Zoo, and believes that there's nothing sexier to people than a tiger. Then there’s Jeff Lowe, who sneaks cubs into Las Vegas penthouses, among other cons. One tiger owner, Mario Tabraue, was the inspiration for Tony Montana in “Scarface,” and talks about his actual crimes in between footage of tending to his big cats. To give you some perspective on the scandalous figures who populate “Tiger King,” Tabraue only appears for a few minutes.

Each player here has a decades-long love of wild animals, an enigmatic presence in front of a camera, and a cadre of dark secrets. Perhaps no one has more than Carole Baskin, whose popular Big Cat Rescue tiger haven down in Florida is aligned with PETA against Joe and other breeders. As you can imagine, Joe hates her as much as he loves his cats, and his bravado knows no censorship when it comes to disparaging her, threatening to kill her, or trying to convince the world that it was Carole who made her missing ex-husband Don disappear. Part of the hilarious madness of “Tiger King” comes from how Joe and Carole’s shared passion is a life sentence, the two constantly clashing, often in the most petty ways, because they have a wildly different approach to the same dream of tiger preservation.

The aesthetics of this story alone—Americana, tiger memorabilia, guns, bizarre facial hair—are a gold mine for a true-crime story, and many other stories would stay at the surface. But “Tiger King” digs deeper, seeking to explore what kind of person would own big cats, or give their life to someone who does. With nary a weak episode, “Tiger King” establishes rich dynamics of possessiveness, of individual kingdoms that can be destroyed from the inside just as much as the outside. This makes everyone's many back-stabbings all the more vivid, especially as Joe later on has to fight for ownership of his zoo, while balancing his political aspirations.

Take episode two, “Cult of Personality,” which focuses on the control that Joe, Doc, and Carole have over the people in their enterprises. Joe has workers who are given miserable living conditions and are fed with expired meat; Don has a cult of women animal trainers that he grooms from a young age; Carole has volunteers who skip Christmas in order to tend to her big cats. Are these leaders providing a sense of direction to their helpers, or taking advantage of them? “Tiger King” has no answers about this, but it gives everyone a chance to comment on the other, and a full picture is painted in the process. Every key player tries to analyze and rat on somebody else, like whenever Joe talks about Carole’s business, his words then reflecting back on himself. Everyone also clings to overdue karma, and thinks that the police didn't do their job regarding the series' multiple baffling, unsolvable crimes. “Tiger King” also becomes one of those docuseries, like “Wild Wild Country” before it, in which your favorable opinions will volley back and forth.

Chaiklin and Goode's miniseries has some Netflix doc storytelling mainstays (such as an opening that functions like a trailer, and a whimsical score), but the very scope of "Tiger King" makes it stand out from its contemporaries. “Tiger King” works through its saga while eschewing the narrative order of a strict timeline—it was shot over five years, and the doc’s five credited editors organize it as a series of events and thematic explorations that completely fill the seven episodes with natural comedy and juicy big cat owner drama. There is an immense amount of care to this story, which shines in its nuanced tone—it’s not as plainly silly as its absurdity guarantees.

The miniseries even gets a boost from a first-person perspective, with co-director Goode (the more on-camera of the two directors) acting as surrogate for our active astonishment (like when Tabraue casually brings up Doc’s cult of tiger trainers, it sends the doc off on a ten-minute exploration of that). Goode and Chaiklin seem to be learning about the next bizarre detail at the same time we do, and “Tiger King” always has that addictive quality of seeing that there's even more to such an unbelievable tale. 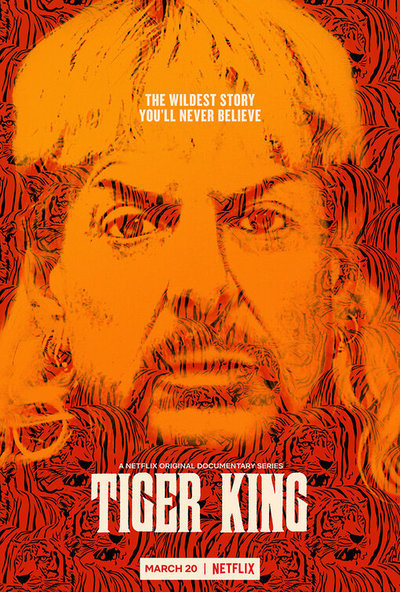