This is Not Berlin

An avant-garde tale of youth spawned with intoxicating memories of mid-'80s Mexico City, Hari Sama’s semi-autobiographical “This Is Not Berlin” is high on alternative ideas of decades past. Ultimately about the gray, adolescent area between belonging and standing out, this feverishly sensual film follows an uncertain teen as he tries out a few brazen identities, haircuts and voices along the way before discovering the comforts of a pertinent combination. In “Berlin”—not unlike in Olivier Assayas’ “Something In the Air” or John Carney’s “Sing Street” or any good coming-of-age film with something to say—the process of building one’s character has its perils and benefits. You can’t crawl under the protective wings of your fellow searchers without ruffling some feathers and sustaining deep scars to show later as proof of your formative years.

To the punch-drunk Carlos’ initial bewilderment, anything goes in this punk, pansexual underground scene of non-conformist acceptance. Headquartered at an uber-cool nightclub called Azteca, the landscape is filled with adventurous LGBTQ youth spearheading a counterculture movement of insurgence. Lead by the audacious Nico (Mauro Sanchez Navarro), the dance and performance art space flows with unrest, boundary-pushing sex and of course, music in its every vividly colored corner. “It’s an everything club,” is how one character describes Azteca; and that hearty dose of everything (some of it, admittedly pretentious) welcomes Carlos with open arms. Meanwhile in the background, Sama subtly and respectfully nods to the impending AIDS crisis, as well as reproduces the era’s mainstream deficiencies around poisonous masculinity. Needless to say, there is no room for straight male entitlement in Carlos’ newfound clan—the collective even protests football (as in, soccer) in one scene, on the grounds that it’s a catalyst of homophobia.

Sama daringly charts Carlos’ journey in vibrant detail, accentuating his ever more performative commitment to his advantageously ambiguous identity, sexual and otherwise. Often in heavy body and face make-up and protesting the establishment on the streets alongside Rita, Carlos gradually pitches himself at the center of an overindulgent yet cathartic subculture, while his druggy mother Carolina (the Oscar-nominated Marina de Tavira of “Roma,” regrettably underutilized) continues to be a hazy presence in his life. Given the filmmaker is really recounting his own experiences of the era—he even grants himself the role of a kindly uncle named Esteban—it’s forgivable that Sama almost falls prey to the trappings of a cautionary rise and fall story with “Berlin.” But he bounces back, especially when “Berlin” inevitably takes apart the loose ends of a juvenile male friendship put to test, bringing to mind Alfonso Cuarón’s "Y Tu Mamá También."

Sama owes much of the authenticity and visual panache of “This Is Not Berlin” to his cinematographer Alfredo Altamirano. The DP’s nervy, panoramic compositions heighten the precise production design of various multimedia art pieces and an assortment of impeccably choreographed street protests. That you should expect an embarrassment of riches when it comes to a New Wave-y soundtrack almost goes without saying—the likes of Bryan Ferry and Joy Division are represented amid a long list of musical needle drops. A gutsy collection of 1986 specificities, “Berlin” might not have an obvious narrative punchline in the end, but it remains one hell of a nostalgic revolt throughout. 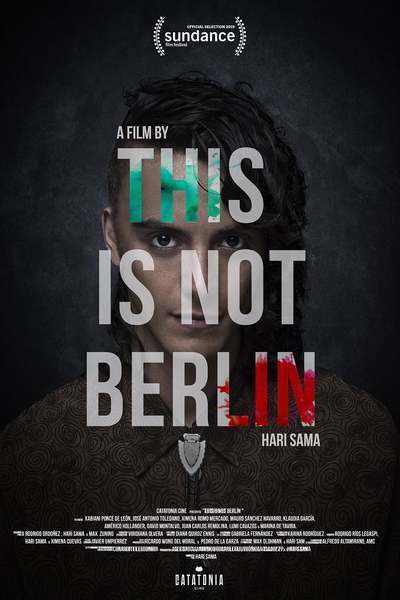